Heartfelt condolences on the passing of Bill Duffield 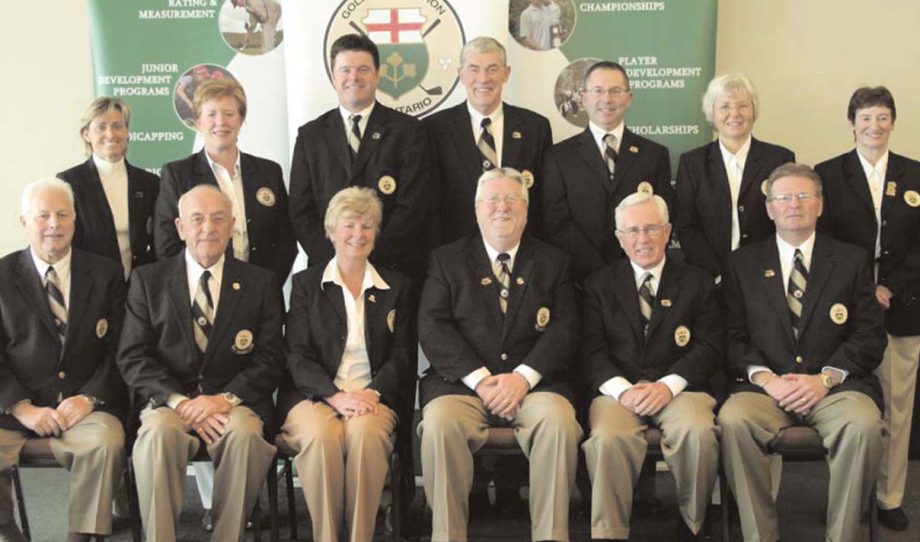 We are deeply saddened to learn of the passing of Bill Duffield. A long-time volunteer and rules official and the 2007 President of the Golf Association of Ontario, Bill’s commitment to golf was unmatched.

Bill was the recipient of the Syl Apps Special Achievement Award in 2008.

Our condolences to Bill’s family and friends. 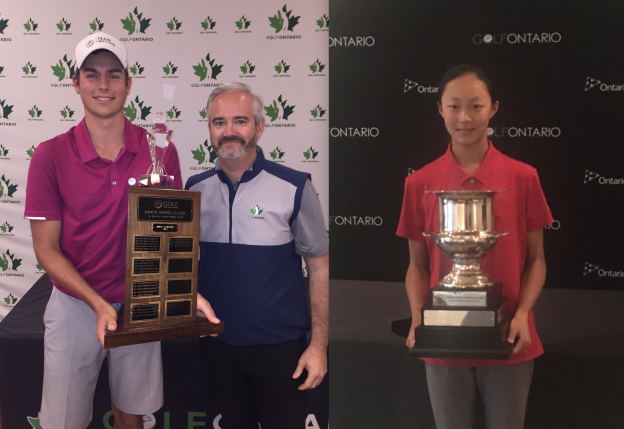 Brockville/Uxbridge, ON – On May 18th to 20th, Brockville Country Club and Wooden Sticks Golf Club will host the Junior Spring Classic (U19) Championships. The Championships are open to boys and girls who are 18 and younger, and have qualified in previous tournaments.

“It’s an old course with lots of twists and doglegs,” said Doug Wark, Director of Sport Operations at Brockville. “It’s a course golfers have to understand due to the importance of positioning. It’ll be exciting to see how the players adapt.”

With Anderson moving on past the junior ranks, the top spot is up for grabs. Dunphy will be returning in the 2019 tournament, looking to turn his previous second place finish into a championship run.

Another notable golfer playing over the long weekend is Michael Ikejiani from Barrie Country Club. Ikejiani is coming off a hot start to the season, winning the Junior Boys division of the Ontario Champion of Champions Tournament on May 14th. Ikejiani led the charge, shooting -3 (68), which was the most commanding lead in the entire tournament. It is safe to assume he is hoping to continue his success at the Junior Spring Classic.

Tee times are set for 12:00pm, with split tees starting at the first, and tenth hole.

While the U19 boys are out in Brockville, the Junior Spring Classic (U19) Girls Championship will be held at Wooden Sticks Golf Course in Uxbridge. Wooden Sticks has brought together some of the most recognizable golf landscapes from the PGA and sculpted them into the scenery of the local area to produce 18 holes that will challenge all competitors. With golf holes inspired by Augusta, St. Andrews, Pine Valley, Carnoustie, TPC Sawgrass, and Oakmont, it is surely a course that shouldn’t be taken lightly.

“We’ve hosted this event over the past couple of years for the boys, so we are excited to host the girls this year,” said Steve Wilson, Head Golf Professional at Wooden Sticks. “There’s so much talent in this tournament, it’s without a doubt going to be an exciting weekend.”

Last year, the Girls Spring Classic was a tight race. Emily Zhu from National Pines Golf Club, finished in first with a score of +8 (224). Zhu was closely trailed by Team Ontario member Hailey McLaughlin from Granite Golf Club who finished +9 (225), and then Taylor Kehoe from West Haven Golf & Country Club who finished +11 (227).

With both Zhu and Kehoe not returning to the tournament, McLaughlin is the only medal winner from last year returning this season, giving her a good opportunity to claim the top spot.

The girls will be facing off at Wooden Sticks for a chance to win the WD Randolph Millage Trophy.

Tee times are also set for 12:00pm, with all players starting at the first hole.

To read more about both the boys and girls results last year, CLICK HERE

The three day tournament will challenge the focus, stamina, and skills of all the participating golfers. We wish all attending both Brockville and Uxbridge good luck, and we’ll see you on the course!

12 Days of Golf has launched!

UXBRIDGE— Golf Ontario is proud to announce the return of The 12 Days of Golf in support of the Future Links Golf In Schools program. In 2016, the fundraising campaign debuted and was met with overwhelming support, managing to raise more than $30,000.

With the holiday season right around the corner, Golf Ontario is ready to again help shoppers find the perfect gift for the golfer on their list. The 12 Days of Golf will once again officially begin on December 1st and run until December 12th.

“The 12 Days of Golf gives all Ontario golfers the chance to purchase exclusive tee times and play some of the best courses in the province,” said Mike Kelly, Golf Ontario Executive Director. “This is a great way to treat the golfer on your holiday list and it is all thanks to the generosity of our great member clubs!”

Angus Glen, Copper Creek Golf Club and Muskoka Bay Golf Club are just some of the exciting courses that will be up for grabs. Golf Ontario has made it their goal to make the 12 Days of Golf online auction a one-stop shop for people looking for gifts for golf enthusiasts. Once a foursome has been purchased it will be sent directly to the purchaser in time for the holidays.

The best part about the campaign is that all of the proceeds will go towards the Future Links Golf In Schools Program in Ontario.

“The Future Links Golf In Schools program is a great grassroots program that Golf Canada and Ontario run in the province. Introducing young people to all that golf has to offer helps to shape our youth by reinforcing values like integrity, respect and perseverance,” added Kelly.

When the 12 Days of Golf begins on December 1, multiple foursomes will be available for auction every three days. The items will only be in the auction for those three days before being replaced by a new set of foursomes. Bidders are encouraged to check back regularly to see what foursomes are available. All items will have a minimum bid, depending on the course, and will have a Buy It Now feature, in case there is an item that is a must have.

Golf Ontario would like to thank the participating courses for supporting this outstanding initiative.

The auction will be accessible through Golf Ontario’s main webpage (gao.ca/12days) and will also be live on Golf Ontario’s eBay page at: http://www.ebay.ca/usr/golfontario.

About Golf In Schools

The national Future Links Golf in Schools program is offered in the province by Golf Ontario in partnership with Golf Canada, PGA of Canada, and Physical and Health Education Canada (PHE Canada).

The goal of Future Links Golf in Schools is to introduce students and teachers to the game of golf in a fun and exciting environment, and to link them to local golf facilities where they can transition into the sport.

Future Links Golf in Schools includes equipment and programming that can be delivered by school teachers, community golf coaches, and local golf professionals at schools or golf facilities.

Below is a list of Ontario golfers who have signed their National Letter of Intent to attend NCAA schools during the 2017 early signing period. If you are or know of a student who has recently committed to an NCAA school to pursue their education and golf career please let us know by email (dmatte@gao.ca).

Golf Ontario congratulates all Ontario golfers who have committed to a school during this signing period and wishes them the best as they further their academic and athletic careers.

“Being President of the IAGA is quite the honour for me. It is an exciting time to be in the golf industry with so many new ideas and philosophies to better grow our game. I am excited to have this opportunity and am eager to face the challenges that come with it,” said Loughry.

Loughry, a resident of Courtice, has been with Golf Ontario since 1998 where he began overseeing Handicapping and Course Rating for the province. Since then his role has evolved but Loughry has continued to share his expertise in the field at multiple levels. He has held a similar role with Golf Canada and volunteered with the USGA on their Handicap Procedures Committee. In addition, he currently represents Canada on the World Handicap Committee.

Since 2012, Loughry has been a member of the IAGA Board of Directors. He becomes the fourth representative from a Canadian golf association and the first from Ontario.

Loughry has had a life-long passion for the game of golf. He has a well-accomplished playing career that includes the record for most Ontario Public Player Championship wins with four.

The IAGA has been in existence since 1968 with the goal of promoting and conserving the best interests and the true spirit of the game of golf as embodied in its ancient and honorable traditions. The IAGA serves as a medium for golf administrators to exchange information, techniques and other data relating to the game of golf and establish channels of communication among all of the world’s golfing fraternities.

Loughry will serve as IAGA President until next year’s annual conference.

Highlights from the 2017 Ontario Juvenile Boys’ and Girls’ Championships, Aug. 15-17 at Sawmill Creek Golf Resort in Camlachie. The titles were won by Fonthill’s Freddy D’Angelo and Markham’s Victoria Zheng.

UXBRIDGE — Six players are returning to Team Ontario (U19) in 2018 and will be joined by eight new faces as Golf Ontario is pleased to announce the newest installment of the squad. The 2018 team will see an even split of seven boys and seven girls.

“The start of a new season is always exciting but this year even more so,” said Millage. “This group is filled with talented, young athletes that are striving to be better and willing to do the work necessary to achieve their goals. I expect one of the hardest working teams this year and I have no doubt that they will show their off-season work next spring.”

The team will train throughout the winter at Peak Performance Golf in Vaughan. They will have a pair of local camps, followed by three winter warm weather camps including the Can/Am Matches, during March Break with the South Carolina Junior Golf Association at the Wachesaw Plantation Club in Murrells Inlet, South Carolina.

Golf Ontario’s Team Ontario program is a high performance training program for the top junior aged golfers in Ontario. Athletes are selected in the fall each year and the program runs during the winter into the Ontario golf season. Team Ontario athletes receive the very best in coaching services, training/competitive opportunities, and sport science support. Being selected to Team Ontario is a tremendous accomplishment and offers unparalleled support and guidance to the participating athletes and their families. New for 2018, Team Ontario will be piloting a number strategic initiatives with Golf Canada and its National Team program focused on ensuring identified Next Generation players are getting opportunities and programming to best prepare them for high performance golf.

Highlights from the 2017 Ontario Junior Boys’ Championship, July 4-7 at The Rock Golf Club in Minett, won by Sudbury’s Tristan Renaud.