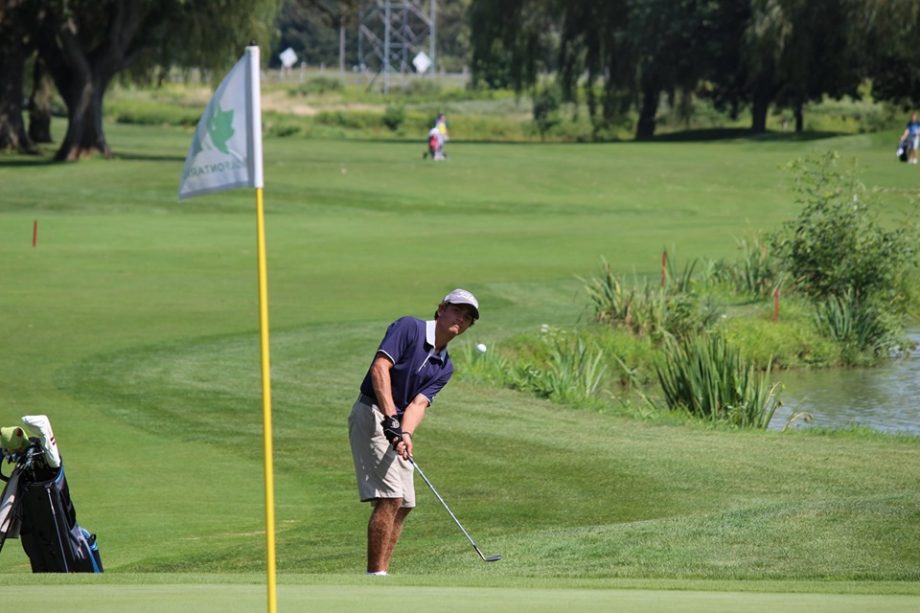 London, ON — Day two welcomed players with over an hour of delay due to fog, but once it cleared out the players continued their momentum from yesterday and showcased some impressive play throughout.

After the first round of the Ontario Juvenile (U17) Boys Championship, things were far from decided between the players. Round two proved to be much of the same as the talented field competed for the top spot heading into the final day. Carson Duffy (Bigwin Island GC) entered the day on top with a score of -3, but was trailed closely by a pack of players all within one or two strokes behind. After 18 holes, it was Tommy McKenzie (Northridge Public GC) and Ty Stansfield (Thornhill Club) who came out on top.

After trailing Duffy by only a few strokes heading into the second round, both McKenzie and Stansfield shot lights out in today’s outing. McKenzie came out hot early with two birdies on the first two holes, and rode those out the entire way through. With only two bogeys the entire round, McKenzie continued his success and steady play from yesterday to propel him past the field.

On the other hand, Stansfield came out with the best round of the tournament. Entering the day at even-par, Stansfield knew he had to show out big to catch up to the leader in today’s round. And show out he did. Carding three birdies and six pars on his back nine, Stansfield rose from fifth to first in only a few holes.

“It was pretty exciting to be able to come back like that,” said Stansfield. “I came out with the intentions of putting myself in a good position for the final day so it’s rewarding to execute on that.” Both Stansfield and McKenzie have been in the same grouping the past two days, so the familiarity heading into tomorrow is there.

“At this point we’re comfortable around each other,” said Stansfield. “I know it’s going to be really competitive out there, I look forward to it.” The duo now face against each other one last time to see if either can pull ahead during tomorrow’s final round.

Sitting in third by a single stroke is Owen Kim (Blue Springs GC) who has been showcasing an impressive game all week. Although not in the same group as Stansfield and McKenzie the past two days, one has to believe he has his sights set on dethroning the two early.

Tee time is set for 7:30 am. For future results and information on the tournament, visit the official tournament page HERE

As the girls took to Greenhills GC for their second round, all eyes were on Kelly Zhao (Station Creek GC) as she took the tournament by storm in the first round leading by four strokes above the rest after 18. The question on many minds was if Zhao could hold the lead, or if she would crack under the pressure. 18 holes later, Zhao silenced the doubters with yet another impressive round, carding a -1 on the day, entering the final round with a final score of -3 (three strokes ahead of second place).

The 12-year-old continues to show maturity in her game, as she came out of round 2 with yet another steady showing. With only two bogeys on the difficult course, Zhao played a smart game laying drives down the center of the green and playing chips close to the hole.

“I just came out and played smart,” said Zhao. “I played well yesterday so I knew I simply had to continue my momentum.”

After two strong rounds, Zhao now leads Krystal Li (The Summit G&CC) by three strokes heading into the final day. When asked about her gameplan heading into tomorrow, Zhao explained that she’s not going to stress too much.

“Just go out there, try my best and have fun,” she said. “I’m just going to keep playing the way I’ve been playing.”

Li has also had a strong showing this week. Coming of a tough defeat for first in the Bantam Championship just last week, Li has come out with something to prove. Carding a -2 during today’s round, Li made sure to inch as close to the leading Zhao as she possibly could, putting her in striking distance on the final round tomorrow. It will surely be a close round between these two.

Sitting in third are Sarah Gallagher & Bo Brown (Blue Springs GC). The duo finished today with total scores of +4, sitting four strokes behind Li. But don’t count them out yet. The two have proved in the past that anything is possible, and they will surely be in the hunt for the top spot tomorrow.

Tee time is set for 7:30 am. For future results and information on the tournament, visit the official tournament page HERE