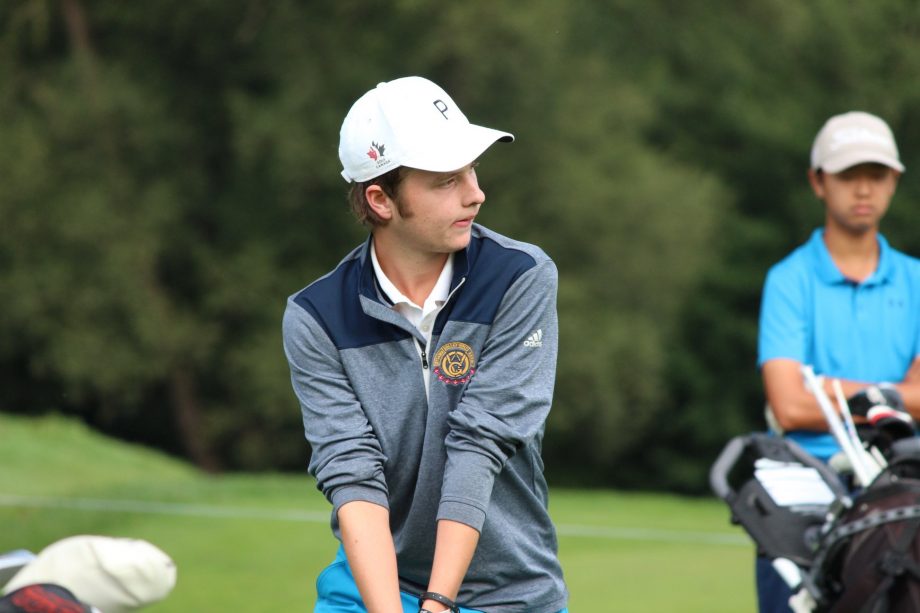 London, ON — Cool and cloudy skies cast above the track as the players took to Greenhills GC for the third and final day. After two competitive rounds the previous day, the importance of today’s round was monumental as the boys and girls looked for one last round to claim glory.

It was a crowded leaderboard entering into the final round of the championship. With only two strokes separating the top five players, it was clear early on that everyone came out with the intentions of an early strike. It was a tight race throughout, but it was Ellis Kinnaird (Mississippi) who came out on top.

Entering the day, Kinnaird trailed the leaders by three strokes, but it was quick to see he would climb back into the race. With a majority of the scores in the positives, Kinnaird found a way to card the low score of the day with a -3, resulting in a -2 total. The Carleton place resident came out of the front nine even, but caught some heat early on in the back. Notching a birdie on both 10 and 11, Kinnaird started a run that would end up crowning him a champion.

“My mindset today was to go at every pin and get a lot of birdies,” said Kinnaird. “I was pretty far back heading into today and I didn’t think anyone would fall back too much, so I knew I had to come out aggressive.” Once Kinnaird got some momentum on the back nine, he started to believe that he could possibly make the comeback.

“I felt I had a pretty good chance if I could just keep it going. I was in my own zone, and pretty focused.” Kinnaird sunk in his last putt, and was crowned a champion.

The second place Ben McLean (St. Catherines G&CC) was another player who impressed today. Coming into the round six strokes behind the leaders, many forgot about his ability to play alongside the top players. Coming out hot early, McLean sat at -5 after 13 holes. Down the final stretch however, he wasn’t able to hold the lead and allowed Killaird to close the gap, eventually taking over. All in all, McLean had an impressive showing throughout, and especially during today’s final day. He finished the tournament with a total score of even-par.

Tying McLean for second was Owen Kim (Blue Springs GC), who put pressure on the leaders the entire way through. Kim, who at one point even had the lead, showed his ability to play at the highest level and continued to impress everyone around. Also finishing even-par, he ends off the golf season on a high note.

Unlike the boys, there was a clear leader the entire way through the first two days of the tournament. All eyes were yet again on Kelly Zhao (Station Creek GC) as she took to the course for her third and final time. Leading since the very first day, Zhao was the heavy favourite heading into today’s round with a three stroke lead over the trailing Krystal Li (The Summit G&CC).

Proving herself yet again, after the final round it was Zhao yet again at the top of the leaderboard. Finishing the tournament with a total score of -1, the 12-year-old showed poise and maturity way beyond her years. There were points throughout the round where it looked like Li was making a push, but every time it was Zhao who pushed on, holding her lead. It’s no easy feat leading a tournament from the very first day, many find it adds pressure to excel, but for Zhao it made no difference.

“I just wanted to come out and try my best,” said Zhao. “Whatever happened, happened. The whole tournament I was playing pretty well so I knew that if I could simply keep playing the way I had been, then I had a good chance.” Despite the lead heading through today, Zhao never settled. It wasn’t until the last hole where she felt like she had the tournament in the bag.

“The entire way through I was careful because I know how good the competition was,” she said. “But by the 18th hole, I knew that everything was going right. That was when I felt I had it.”

Trailing Zhao the entire was through, Li continues to prove her abilities and skill set. Playing a fantastic round today, there were moments where Li looked like she was going to be able to pull ahead. Despite not being able to catch the red-hot Zhao, Li’s efforts were not for nothing. Placing second for the second time in only two weeks, The Summit member may need to find a larger shelf for her hardware soon.

Tying Li for second was Sarah Gallagher (Blue Springs GC). Gallagher sat quite a few strokes behind the leaders throughout the round but after a hot streak on the final stretch of the round (three birdies on the final four holes) Gallagher propelled herself back to the top of the leaderboard, finishing the tournament with an impressive +4.