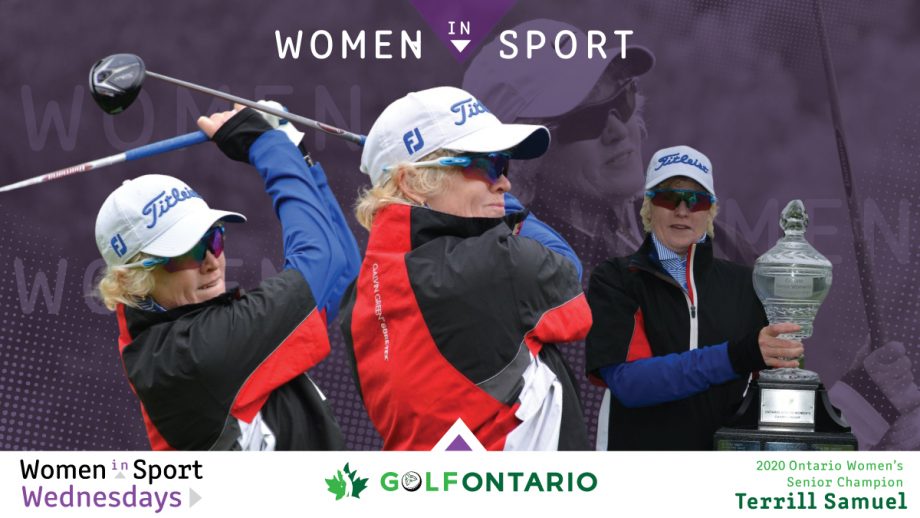 Welcome back to another round of Golf Ontario’s newest feature, Women in Sport Wednesday’s! This campaign embraces our female 2020 Ontario Champions, their passion for the game, their accomplishments in the sport, and some interesting facts about each champion.

A modest golfer with great talent and a lengthy list of championship titles, Terrill Samuel is a two-time Ontario Women’s Amateur, three-time Ontario Women’s Mid-Amateur, and two-time Ontario Senior Women’s champion. In 2018, Samuel was inducted into the Ontario Golf Hall of Fame, joining the Class of 2018 in the Amateur Golfer category. In 2021, the number one thing for Samuel is “to still enjoy the game and get out for some great rounds with some really good people. And if you play well, that’s a bonus!”

How did you get into Golf?

My Mum would take us to visit her parents in England and they got me into golf for a couple of weeks at the end of our summer break. They had a little nine-hole course near them and they signed me up, so that’s how I got involved in golf. I was probably around 7 or 8 years old when I first picked up a club. I didn’t play in Canada until I was 21, which is a big birthday for us Brits, so I asked for golf clubs! I was 23 when I played in my first competitive tournament.

What does the sport of golf do for you?

I think especially in Amateur golf, it’s more about friendships. I’ve been out with a few injuries and you truly miss that, but once you get back it’s really nice to see all your friends and you have these friendships for life. Also just enjoying being out in the fresh air, especially this last season, just getting out of the house and having golf since it was one of the only things you could do.

It’s a lot of fun and the comradery that’s out there in Amateur golf is great. You get to meet new people and playing in tournament golf allows you to go to different places in the world, which I think is another great aspect of golf. I’ve been able to visit New Zealand, Sweden, France, and a lot of other really nice places. I’ve been all over the States and in Canada, you get to see every province, which is pretty fun too.

What other sports were you involved in growing up?

Both my brother and I were actually swimmers, and we swam competitively so that’s why we never really got into golf at a young age in Canada. Swimming took up a lot of time as it was about four hours of practice every day; two hours in the morning and two hours at night. I competed in about every stroke except breaststroke.

Royal County Down Golf Club, Newcastle UK (Northern Ireland) – that was my favorite!

Favorite club in your bag?

I would probably say my 8 iron! My 8 iron and my 5 hybrid are the ones that I take to the range and practice with the most.

How do you mark your ball?

I put a happy face on one side and the letter “T” on the other.

What’s your pre-tournament routine? How do you get into the right headspace?

I’m one of those golfers that just hits it and chases it, I don’t really think too much about it. I admire people that like to analyze their game, but once golf is over I don’t really talk about my round either.

I’m probably known as a pretty fast player (we’d agree – it’s hard to get a picture of Terrill off the tee!!). I just figure out the yardage, pull a club, and go. This is my one saying – Slow players always get to play at their pace, but fast players never do. My dream round would be first off, with two other fast players and no crossover.

If you could play a round of golf with anyone, who would be in your foursome?

Golf Ontario is Ontario’s Provincial Sport Organization focused on enhancing participation, elevating performance, and supporting the passion of golfers in Ontario. With over 100,000 individual members and 450-member clubs, Golf Ontario is one of the largest golf associations in the world. From rating courses and keeping the integral rules of the game intact to growing the game at the grassroots level and hosting the best amateur tournaments in Canada, Golf Ontario is a passionate group dedicated to shaping lives through Golf.