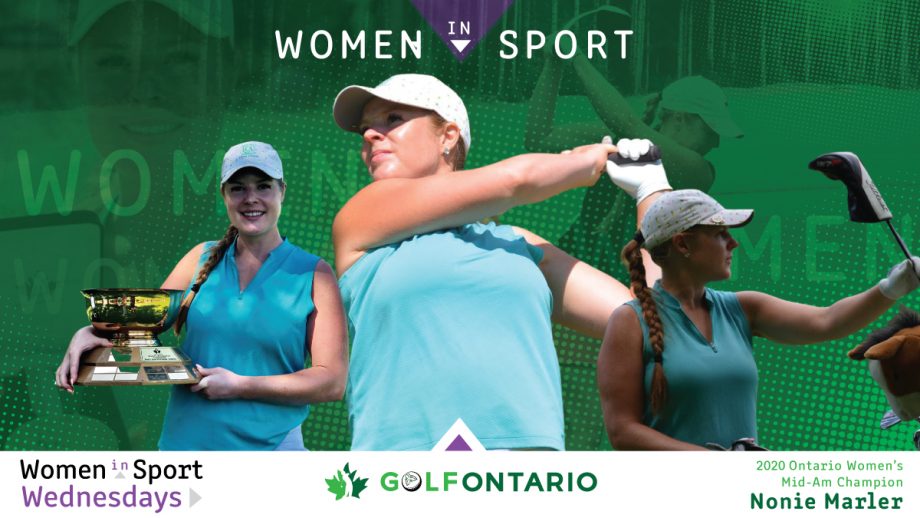 Welcome back to the second round of Golf Ontario’s newest feature, Women in Sport Wednesday’s! This campaign showcases our female 2020 Ontario Champions, highlighting their accomplishments in the sport, how their passion for golf came to be, and some interesting facts about each champion.

Golfing from a young age, one of Marler’s first golf coaches was Fraser Mulholland, who is the current Commissioner of the Vancouver Golf Tour. A Guelph Gryphon for four years, Marler would captain her golf team before moving to Europe and taking a break from golf. Recently returning to competitive play, 2020 presented Marler with two provincial titles and several wins on the Vancouver Golf Tour. Following three near flawless rounds at Dalewood Golf Club this past season, Nonie Marler would be crowned our 2020 Ontario Women’s Mid-Amateur Champion.

Read the full interview with Marler below…

I come from a family of golf lovers, as my dad and my brother are really avid golfers. My brother is actually a part of the Agronomy crew at Bear Mountain in Victoria, British Columbia (Bear Mountain is the Official Training Centre of Golf Canada’s National Junior Squad). I’ve always been passionate about playing and I’m a competitive person in general. Golf was one of those things on family holidays that was a fun activity to do together and although my mom is a non-golfer, she’s an avid spectator. She liked to come along and ride in the cart. As a high energy child, my parents threw me in pretty much every sport growing up. Golf was something I took to a little bit later as a teenager and when I went to university in Canada, it was only when I arrived on campus that I found out the school had a golf team. I figured I’d give it a whirl and I ended up captaining the Golf Team at the University of Guelph during my time there.

Following university, I ended up staying in Ontario for a few years, moving up to Georgian Bay where I played quite a bit of tournament golf in addition to working at Georgian Bay Club. After a short stint living back in Vancouver, I moved to the UK where I pursued my MBA and then went on to stay and work there for 10 years; so golf kind of took a back seat, but I continued to play casually and kept it up because golf is one of those sports where it doesn’t matter what you’re doing in your life, you can always play it wherever you are. While living in London I headed up Corporate Hospitality and Events for a global IT company called Ricoh (which has a long standing partnership with Women’s golf), so I was involved in the golf realm from a professional standpoint but never in a competitive manner.

When I moved back to Vancouver about three and a half years ago now, I had the time to pick golf back up. On the advice of someone saying ‘hey you’re not so bad, you should try to play in some tournaments’, I was like ah yeah okay and so funnily enough the first tournament I played I actually ended up winning! And from that experience it kind of got my competitive juices flowing and now it’s something I love doing outside of my career, which is taking care of operations for Cushman & Wakefield’s Equity, Debt & Structured Finance platform in Canada.

So I have really only just picked up tournament golf again, and over the last season and a half, it’s cool to be having a lot of fun and seeing some success with it.

For sure, it definitely feeds my competitive nature. Just with my personality and anything I do, I really throw myself into things I’m passionate about – I’m somewhat of an all or nothing type of person. And while I enjoy playing recreational golf with my friends and family, I just love the competitive drive and energy I tap into playing in tournaments. Golf itself is a great equalizer age and gender wise, whether you’re playing in a foursome with guys and kicking their butt, there are not too many sports you can play where you can sort of have that healthy competition. And in the Women’s Mid-Am where it’s 25 years and older, I get to play with a true variety of women age range wise and it’s a really great level of competition across the board. With golf in general, it’s neat that you can have such diversity in playing the sport.

Especially in business too, being able to play golf has been really helpful. From a networking standpoint, it’s pretty incredible that you can be anywhere in the world and by being able to play golf, you get invited to so many things. Golf is such a great connector and I am very grateful for the opportunities the sport has provided and continues to provide me.

Interestingly enough, probably skiing! I do love team sports and golf, especially playing at a high level and having a caddy and a team around you, it’s in many ways a team sport, but the end result ultimately lands on yourself. And I think with skiing too, ultimately, it’s just you yourself out there. I grew up skiing Whistler Blackcomb and Mt. Baker and I used to race as a kid. My parents put my brother and me in ski camp, so we were racers until our teenage years. I was big into horseback riding and gymnastics growing up too, I still love and follow both but there are only so many hours in a day!

I’m really confident with my driver and I love hitting it. My wedges are a close second, I love the creativity you can have with them in your short game.

Titleist ProV1x – two colours always, three dots above and three dots below the logo on the diagonal.

This past summer when I won both the British Columbia and Ontario Women’s Mid-Amateur Championships.

I think we have been really fortunate to still be able to play competitive golf, in light of the current circumstances over the last year. Winning two provincial titles during the summer of COVID was pretty cool and with the addition of several wins on the Vancouver Golf Tour, together it made the summer a pretty special season for me. I put a lot of time and effort into my game last summer, a lot of it had to do with the fact that there wasn’t too much else to do from sports and social standpoints. I’d say the 2020 summer season as a whole, in recent memory anyway, is among my biggest golf accomplishments to date.

I just try to be as consistent as possible. I try not to treat the day any differently because I find when I move outside of my usual routine or do things differently, I can have a tendency to build things up more or treat the situation differently than I would under normal circumstances. I do take special care to make sure my nutrition and exercise programs are consistent, as well as getting lots of rest in the days leading up to any tournament.

Stretching is imperative for me before any round, and I always pick my outfits and do all my nutrition prep the night before so I can be focused on what’s ahead and in the proper mindset and headspace ahead of my tee time. It’s all about removing potential stressors and chaos in the lead up to a round. For me, preparation is key – fail to plan, plan to fail.

I always like cheering on the underdog or the player who has an interesting story, because in a lot of ways I can relate, especially since I’ve taken so many years off competitive golf and am only now coming back to it.

I like following fellow Canadians in any tournament so I always look out for them, but other than that I wouldn’t say I follow any one golfer in particular on a regular basis. I mean when Tiger is in the field, I always check out how he’s doing. I think by virtue of watching and playing so much golf myself, I like to leaderboard watch so I kind of follow everyone.

About the Ontario Women’s Mid-Amateur Championship

First played in 1989, the Ontario Women’s Mid-Amateur Championship is open to female golfers aged 25 and over. In honour of her outstanding accomplishments at the Mid-Amateur level in Ontario, the trophy is rightfully named after 14-time champion Mary Ann Hayward. The event is contested annually in a 54-hole competition. Other notable past champions of the event include 2012 Canadian Senior Women’s Champion Terrill Samuel (1991, 2000, and 2010), Casey Ward (2015), and Golf Ontario Hall of Fame members Gayle Borthwick Hitchens (1992, 1993), and Judith Kyrinis (2017).

Golf Ontario is Ontario’s Provincial Sport Organization focused on enhancing participation, elevating performance, and supporting the passion of golfers in Ontario. With over 100,000 individual members and 450-member clubs, Golf Ontario is one of the largest golf associations in the world. From rating courses and keeping the integral rules of the game intact, to growing the game at the grassroots level and hosting the best amateur tournaments in Canada, Golf Ontario is a passionate group dedicated to shaping lives through Golf.