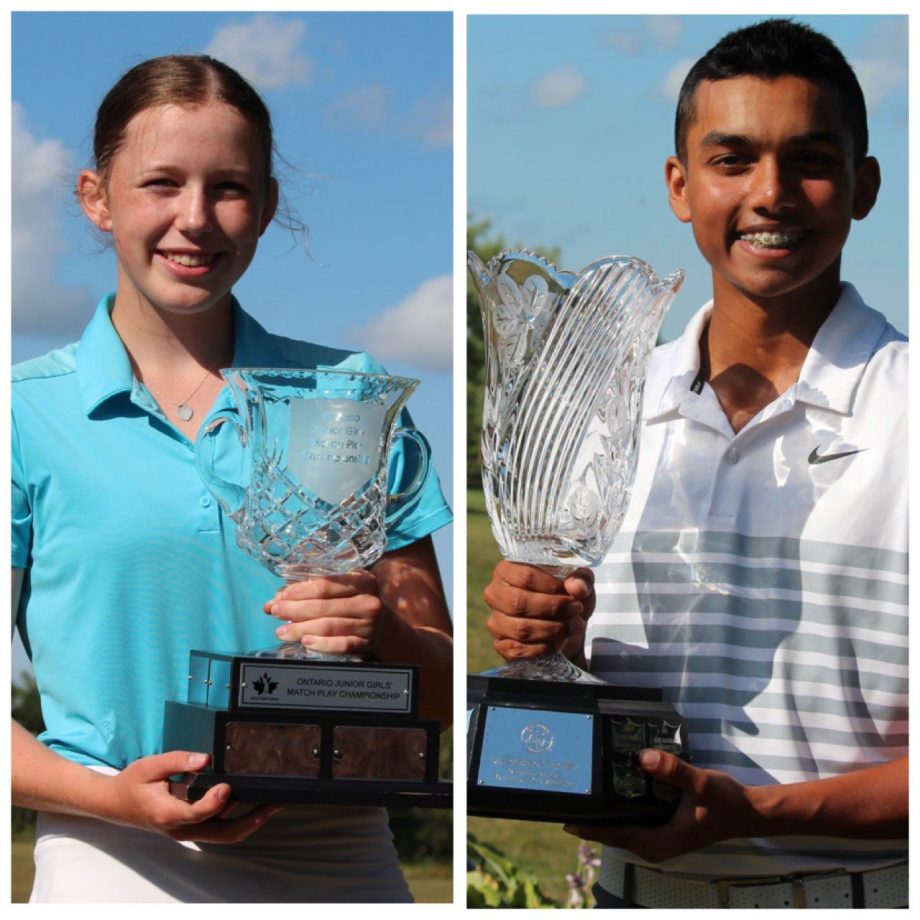 Listowel, ON — Four boys and girls took to Listowel GC today for the chance to be crowned champion. With cool temperatures and cloudy skies welcoming them, the players heated up the course with some impressive play throughout the semi-finals in the morning and the finals in the afternoon.

Josh DiCarlo (Pointe West GC), Thomas Latter (Credit Valley G&CC), Kavith Ranchagoda (Beacon Hill GC), and Carson Duffy (Bigwin island GC) all took to the challenging course in the morning in hopes of moving on to the finals this afternoon. After 18 well fought holes between the two pairings, it was Latter and Ranchagoda who would advance.

The duo hit the fairway at 1:00pm for the final round, and by the time it was all said and done, it was Ranchagoda who came out on top. The match between he and Latter was back and forth the entire way through. Ranchagoda had an early lead in the front nine but Latter continued to fight back. Heading onto 16 the two were still all square until the 17-year-old was able to pull ahead after a beautiful chip shot from the rough. He would then lay the dagger on 18 with an 100 foot shot from the fairway that landed inches from the hole. He tapped the ball in to win the hole and the tournament, crowning himself the 2019 Junior Boys Match Play Champion.

“It’s a surreal feeling,” said Ranchagoda. “I came into the final round knowing I could keep up with every single player in this tournament, so it’s rewarding to come out on top.” When asked about what his game plan was, he had this to say.

“Just be consistent and not make any mistakes. I’ve always been a steady player, I know my game. I just had to execute.”

As for Latter, the Team Ontario member truly impressed over the course of the week. Losing by only two holes to come in second is no small feat, and the young gentleman proved his ability to play with the best.

Ella Weber (Rattlesnake Point GC), Sarah Gallagher (Blue Springs GC), Vanessa Chychrun (Beacon Hall GC), and Megan Miron (Hamilton G&CC) all took to the field for the semi finals in the morning. The two matches were a tight race throughout, but after 18 it was Weber and Gallagher who advanced to the finals.

The two teed off for the finals at 12:50 and from that point on it was a back and forth battle for who would wear the crown, but by the end of 18, it was Weber who was crowned champion. Much like the boys, the front nine between Weber and Gallagher was a back and forth affair, seeing multiple lead changes throughout. It wasn’t until Weber put her foot down and started taking risks that there was a possible winner in sight. The two were all tied up by the time Weber approached 16 with more aggression than ever before seen in the round. Hitting it further than she normally would, the 14-year-old was clearly looking to take the advantage before the last two holes.

“I didn’t want to go all the way to 18,” said Weber. “Gallagher is a really good player and I was afraid if it got to 18 then it could be over for me, so I started playing more aggressively.” And that she did. Taking the next two holes due to deep drives down the fairway, Weber was able to take the crown and leave the tournament a champion.

“It’s an amazing feeling,” she said. “I’m still in shock that I won. I just came in here looking to make it into the semi’s so this is just a bonus.”

As for Gallagher, she continues to improve with every round she plays. She handled her first two rounds with ease and at times looked like she was going to win it all. She leaves the tournament finishing in second place, only two holes behind Weber.

Golf Ontario would like to thank the competitors, their families, and everyone who attended and supported this championship.  We would also like to thank Listowel GC and their staff for their excellent course and hospitality in hosting this event.