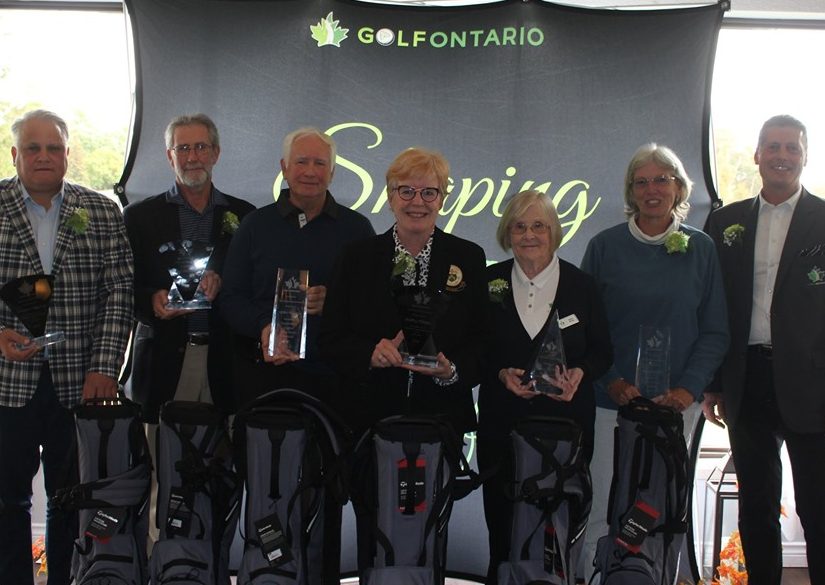 Uxbridge, ON — The backbone and lifeblood of Golf Ontario continues to be the amazing volunteers that offer up their tim, passion and energy to supporting the organization. The hours they put in and the outstanding work they do on and off the course allows Golf Ontario to run world-class events and to provide amazing services to the golfers in this province. On Monday October 7th, Golf Ontario held the annual Volunteer Appreciation Day at The Club of North Halton for the many great volunteers where they enjoyed breakfast, an awards show with the presentation of the Volunteer of the Year Award, the Dick Grimm Distinguished Service Award, and the Honorary Life Director Award. This was followed by a round of golf at the prestigious course in Georgetown, Ontario.

“On behalf of Golf Ontario, I personally want to thank each and every one of our volunteers,” said Golf Ontario Executive Director Mike Kelly. “Without each and every one of you, our events simply don’t happen. Often it can go overlooked how important volunteers are to an organization and I personally know how much passion, effort, caring and time goes into volunteering for Golf Ontario. Thank you on behalf of all the staff and golfers for everything you do.”

While every single volunteer is a vital cog in the Golf Ontario wheel of operations, each year the organization recognizes certain individuals who have gone above and beyond with their volunteer commitments. The 2019 award recipients were very deserving winners.

2019 Volunteer of the Year – Joyce McCrae

The Golf Ontario Volunteer of the Year Award has been designed to recognize and honor a Golf Ontario volunteer who has demonstrated outstanding performance and contributions while preserving the integrity and traditions of the game.

This years recipient is Joyce McCrae, who has been a provincial volunteer for 18 years. Joyce has worked numerous positions in her time as a volunteer, and dedicates over 30 days each season as a Tournament Official at qualifiers and championships. Her past roles include District Convenor and District Coordinator for Peterborough and area. Her sunny attitude is very welcoming, not only to the players, but also with our new volunteers making their first experience a positive one.

Joyce’s actions demonstrate a real commitment to our mission by leading, creating and promoting positive golf experiences for players and volunteers. It’s always a joy to work alongside Joyce, and we look forward to our time together in the future.

The Dick Grimm Distinguished Service Award is considered the highest honor recognizing individual service to the game of golf in Ontario. The award is named after Richard H. Grimm, who was affectionately known as “Mr. Canadian Open” for his service to the event from 1965 to 1993. Golf Ontario’s Dick Grimm Distinguished Service Award recognizes an individual’s meritorious service as a volunteer. Recipients of this award embody the principles of integrity, dignity and commitment, which are central to the volunteer experience and to Mr. Grimm’s persona. This honour recognizes individuals who over a significant period of time have demonstrated outstanding leadership and involvement in the growth of Amateur Golf in Ontario. The recipient will also demonstrate a commitment to the vision and mission of Golf Ontario by promoting and upholding the values of the association and the game.

The first recipient of the award is Margaret Grieve. Margaret has been a volunteer for 17 years, working as a Course Rater, Tournament Official, and Team Leader. She has always helped out whenever and wherever it was needed, and has always demonstrated a true commitment to Golf Ontario’s values of passion, unity, respect, brilliance and accountability.

The second Distinguished Service Award winner is Gilles Hurtubise. The 15 year provincial volunteer has worked numerous roles over his time as a volunteer. Giles has worked as aclub handicap chair, a District Coordinator, a course rater, a member of the board of directors and a member of the Handicap & Course Rating Committee. In his role as Kingston District Coordinator, Gilles dedicated countless hours to introduce and successfully run the Intersectional Matches in the Kingston area. Today, there are now 20 participating clubs in four Men’s Divisions and two Women’s Divisions, with over 600 players competing.

Honorary Life Directors are recognized for their outstanding achievements through their involvement as a Committee and Board Member. This year, the award went to Kathy Pilkey and Ian Murray, two individuals who have made tremendous contributions to the association and golf in the province.

The first recipient Kathy Pilkey has a long history with Golf Ontario, including her time on the Board of Directors between 2006 to 2012. During that time Kathy was President in 2011, on the Executive Committee in 2009 and 2010, and served and chaired numerous board and operational committees. Kathy also represented Golf Ontario on the Golf Canada Provincial Council in 2012, and has played key leadership roles in Audit/Risk Management, Membership and Marketing, Governance Review,
Strategic Planning and developing a relationship with the Ottawa Valley Golf Association.

The final recipient of this award is Chris Osborne. Chris was on the board of directors for over eight years, spending his time in multiple roles, including President between 2015 and 2016. Chris has served on numerous committees including chairing the Nominating Committee, HR & Compensation, and Finance. He was also appointed as a Golf Canada Governor in 2016 in recognition of his ability value to the golf community through his knowledge, connection, and hard work.

“Golf Ontario would like to congratulate all of the award winners and send a special thank you to all of the Golf Ontario volunteers who make everything the association does possible. We look forward to the upcoming years,” concluded Kelly.