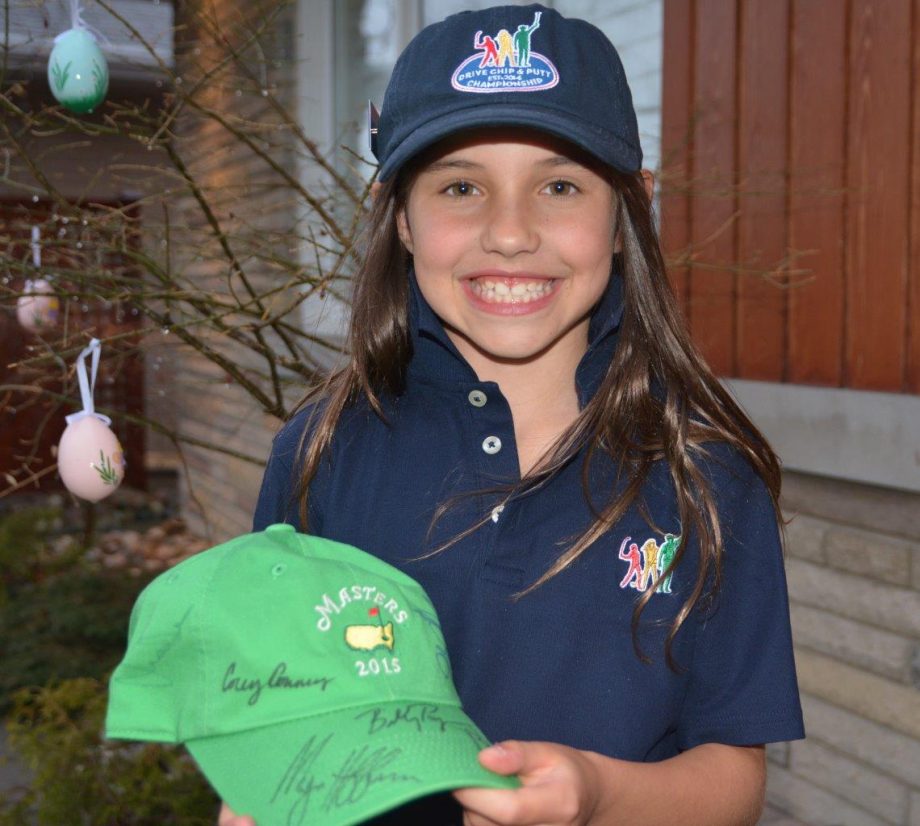 TORONTO, ON – If you have ever dreamed of what it might be like to try to make a 30-footer on No. 18 at Augusta National Golf Club with the Sunday pin placement for the Masters, you might want to ask Vanessa Borovilos for some advice.

The eight-year-old from Toronto has been there and done that, in last Sunday’s Drive, Chip and Putt Championship. Along the way, she learned valuable lessons about never giving up and what it takes to become a champion.

Vanessa stroked her first putt on No. 18 at Augusta National to within two feet of the hole from 30 feet away. Then she edged her second put from the 15 foot marker to just under 18 inches from the cup to finish third out of 10 in the putting portion of the challenge for girls nine and under.

“There’s some pressure” she says, but it’s “an exciting feeling” more than it’s “scary” and that’s probably why the Grade 3 St. George’s Junior School student was able to move from last place to fourth overall in what she says was an “amazing experience.” “Everything was fun. I’m pleased with my overall performance and I really want to go back next year and win it,” she says with a big grin on her face. It’s the smile on her face and the look in her eyes that tell you this was an amazing journey.

It all started by travelling to and winning three qualifying tournament in the United States last summer with her father Dino, who acted as her caddy during the Drive, Chip and Putt Championship at Augusta National. Check outwww.drivechipandputt.com for details on how to sign up for this summer’s qualifiers. For the national championship, Vanessa, her mom, dad and brother flew to Augusta and they stayed together at a Marriott hotel for four nights with a great pool, which is important to eight-year-olds!

She had two practice sessions at a nearby golf club with many of her other fellow competitors on the Saturday to get used to being outdoors again after a long winter of training indoors with coach Doug Lawrie from the Focus Golf Group in Burlington and many nights at a nearby indoor golf dome.

On Saturday night, the 80 Drive, Chip and Putt competitors attended a welcome reception and dinner in downtown Augusta. Billy Payne, Chairman of Augusta National GC and the Masters Tournament, expressed his pride in the accomplishments of the Drive, Chip and Putt finalists. “I truly hope you realize that you have already achieved what millions of others dreamed,” Payne said. “You’re the astronauts who walked on the moon, you’re the pitcher who tossed a no-hitter in the World Series, you’re the golfer who made a hole-in-one on the very first par 3 they ever played. But most importantly, you’re the kids who have been given this unbelievable opportunity because your parents love you, and they have made considerable sacrifices to give you this great opportunity.”

Vanessa was up bright and really early the next morning for a breakfast of waffles and waiting for the 9:15 am shuttle drive to take the nine-and-under girls to Augusta National. After the drive down Magnolia Lane, being warmly greeted and welcomed by Augusta members and an hour to warm up, it was off to the stadium at the practice range for the first event – just two balls for two drives!

“I hit my first drive really hard, but hooked it,” Vanessa said noting that it went out of bounds. She let up on her second drive to try and keep it in play, which she did, but it left her in last place among the 10 competitors.

“When we got to the chipping area, Vanessa was feeling good about being there, but not so good about the driving,” says her father Dino, who tried to lift her spirits. “Vanessa didn’t watch the other girls chip like she did with the driving. I really think she wanted to focus on what she wanted to do. I think she got into her zone.”

From 16 yards away from the hole, Vanessa’s first pitch rolled to within six feet of the cup and then she calmly knocked the second shot to three feet to finish second in chipping. “That felt really good,” Vanessa says, as she moved from 10thto seventh spot in the standings. She improved to fourth place overall with a third place finish in putting.

“I had a tremendous sense of pride seeing how she finished,” says coach Lawrie, the Head Coach for the GAO NXTee Youth Golf Program, who spent the winter months working with Vanessa on changes to her full swing. “I knew going in there was a good chance if she stuck a drive that she had a really good chance of winning the overall title because her chipping and putting is so good. To perform in that pressure environment on national TV with thousands of people watching and you only get two drives, two chips and two putts, I was absolutely amazed at her performance.”

The following day, Vanessa and her family returned to Augusta to watch Monday’s practice round. She smiles when talking about following her favourite golfer Rory McIlroy for six or seven holes, meeting Canadian amateur Corey Conners, getting her Masters hat signed by players like Ricky Fowler and JB Holmes and hopefully being able to play all 18 holes at Augusta one day – and not just the 18th green!

“It’s a beautiful place. I sure hope I’m back next year,” she says. And so does all of Canada!