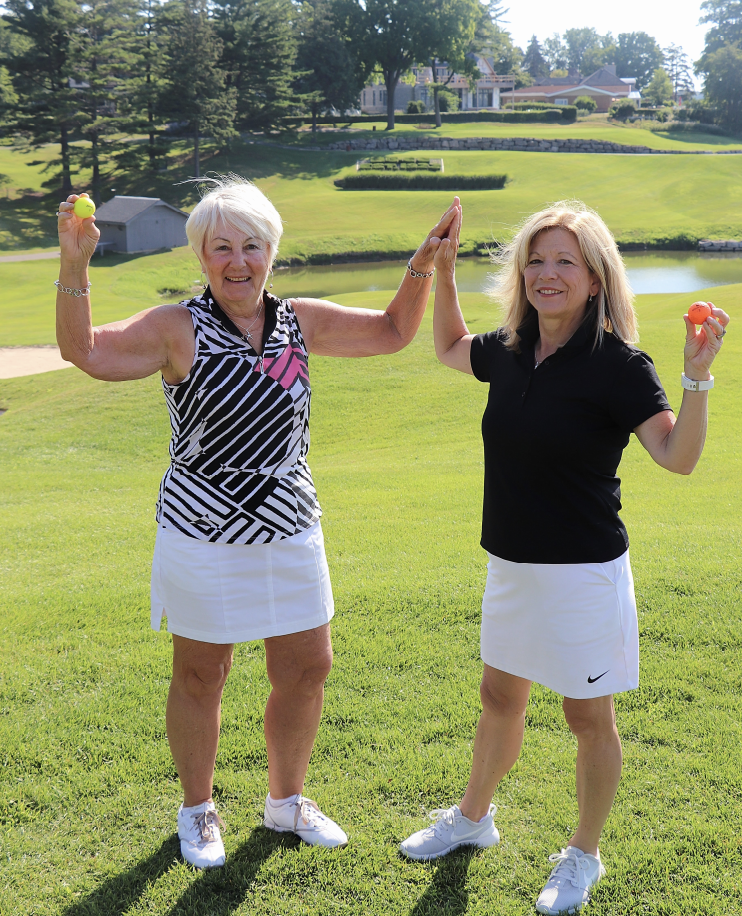 Two Peas in a Pod

When Burlington Golf and Country Club member, Barbara Hoecht, reached the yellow tee on the third hole of Brantford Golf and Country Club she realized that she had chosen the wrong club for the shot. Her husband Ted had just made the shot from the red tee and the rugged terrain running along the left-hand size of the slope indeed had created complications. However, as it was incredibly hot and it had taken mountain-goat-like skills to get up on that mound, Barb decided that she would just need to choke down and swing easy. She sized up the large green set into hilly terrain and took her shot. It deflected off the front right of a hill and made its way all across the green directly into the cup. Barb recalls “It was as though it knew the way!”

Luann Grey, next on the tee, hit her ball, and the group blinked in disbelief as it too appeared to be travelling in the same fashion directly toward the cup. Luann recalls “When I went up to the tee I was so excited for Barb that I did not think about a hole-in-one for me. When I hit the ball, I could hear Barb and Connie shouting, “Wow, I think you hit in the exact spot off the side of the hill!” followed by an excited “It’s going to the pin!”. Next thing we knew it dropped in! It was like seeing Barb’s hole in one all over again. I could not believe it! I too have a hole in one!”

Connie Hughes, the last of the foursome to take her shot, was so elated and anxious to confirm her friends’ accomplishments that she barely remembers hitting her ball.

On the green, in the hole, were Barb’s lime ball and Luann’s orange ball, cozy as two peas in a pod. The group following watched in amazement fully realizing that they probably would never observe a repeat in their lifetime.

Connie excitedly researched the odds of this occurring. She was amazed to read on the National Hole-in-One Registry website “Two players from the same foursome acing the same hole: 17 million to 1.”https://nationalholeinoneregistry.com/facts-feats/

A rarity for sure! What a wonderful memory for dear friends… also like two peas in a pod!