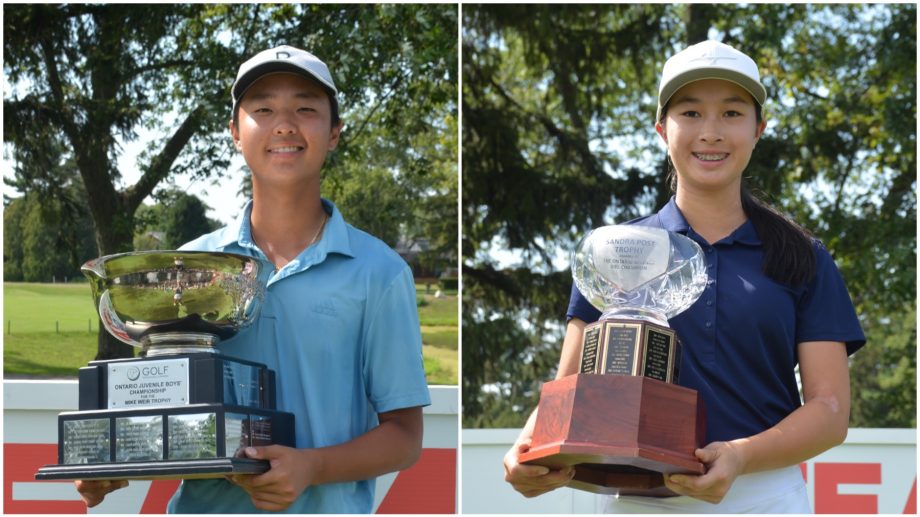 Windsor, ON – Much like the weather, the competition was hot in today’s final round at the Team Goran Ontario Juvenile (U17) and Bantam (U15) Boys’ and Girls’ Championship, presented by St. Clair College. Four champions were crowned at Roseland Golf and Curling Club, as players battled a tight leaderboard in the race to claim the Juvenile and Bantam titles.

Maintaining the lead through the entire championship, Joline Truong (Trafalgar G&CC) completes the tournament with a seven-under to take home the 2021 Ontario Juvenile (U17) Girls’ Championship title. With low rounds of 68, 71, and 70 for an excellent three-day total of 209, Truong’s name will join the Sandra Post trophy with past winners Alena Sharp, Lindsay Knowlton, Rebecca Lee-Bentham, and Grace St-Germain. Silver medalist, Lindsay McGrath (Rattlesnake Point GC), finished four-under after shooting the girls’ low round of the day with a stellar 66. Carlee Meilleur (Loyalist G&CC) and Emma Hansen (Blue Springs GC) will take home the bronze medal with a tournament total of 219.

Truong came into the week off a strong showing at the Ontario Women’s Amateur Championship, placing twelfth with her lowest round to date. The win “feels great after shooting my lowest at the Amateur with a -2. I shot -4 on the first day and today I played with two really strong competitors, so that pushed me to play my best.” Truong’s next tournament will be the DCM PGA Women’s Championship of Canada at Oshawa Golf and Curling Club from August 29th to 31st.

Holding the lead following round two, the 2021 Ontario Junior Boys’ Spring Classic Champion now has another title to add to his 2021 season. Team Ontario athlete, Owen Kim (Blue Springs GC), secures the 2021 Ontario Juvenile (U17) Boys’ Championship title after a lights-out 65 round and a total of thirteen-under (203). Kim will join the likes of Gary Cowan and Johnny Travale inscribed on the Mike Weir trophy. Taking home the silver medal is Isaiah Ellis (Lookout Point CC), who shot his lowest round of the championship with a 68, to give him a grand total of 209. An abundance of T3 players finished in the bronze medalist position, with a total of 212. The five players winning bronze are Jordan Hwang (Emerald Hills G&CC), Zachary Smith (Brampton GC), Isaiah Ibit (Greyhawk GC), Matthew Javier (Scarboro G&CC), and Luke Smith (The Thornhill Club).

With the lead after round two, Kim said “I started my first three holes a little disappointing. I made a bad bogey first hole and I just wasn’t feeling very confident. I really started to commit to my shots and focus, so the birdies just started coming. Everything just clicked into place.” Kim’s next appearance will be at the Golf Canada Selection Camp, which is scheduled for August 29th through to September 3rd at TPC Toronto at Osprey Valley.

For the Ontario Bantam (U15) Girls’ Championship, Lindsay McGrath (Rattlesnake Point GC) is awarded the 2021 title after her best championship round of golf to date. After round two, McGrath found herself in a tie for first with Carlee Meilleur (Loyalist G&CC), who would take home the silver medal seven-strokes behind. Bronze medalist position goes to Alex Ouellet, who held close to the second-place winner just two-strokes back.

McGrath was thrilled with the win, saying “it feels great! I feel I’ve worked very hard for this. I played very well today, shooting my best score ever, so I’m just really happy with how today went.”

Javier spoke to us about how his playoff between Smith and Hwang went. “I hit a pretty good tee shot on the first hole. Left it short, but it was into the wind. Had a bad chip but made up for it with a nice putt. Then Luke, Jordan, and I pared it to go to the next hole. Unfortunately, Jordan went out-of-bounds and Luke and I both pared to go to our third playoff hole, and I made a nice putt at the end.”

Golf Ontario would like to thank the players, rules officials, staff and community for their support of the 2021 Team Goran Ontario Juvenile (U17) and Bantam (U15) Boys’ and Girls’ Championship, presented by St. Clair College. To the City of Windsor, Mayor Drew Dilkens, Roseland Board of Directors, and Roseland G&CC’s hardworking team – General Manager and Head Golf Professional Dave Deluzio, Clubhouse Operations Manager Jordan Schatz, Pro Shop Managers Andrew Carlone and Ettori Taricani, Superintendent Pat Hebert, and Volunteer Chair Shane Guthri – Thank you to your staff and volunteers for being such amazing hosts at Canada’s only municipal Donald Ross golf course. A big thank you to Team Goran RE/MAX Care Realty and St. Clair College as well, for your outstanding support of Ontario’s aspiring young golf generation.

To view the leaderboards from the 2021 Team Goran Ontario Juvenile (U17) and Bantam (U15) Boys’ and Girls’ Championship, visit our Golf Genius page.