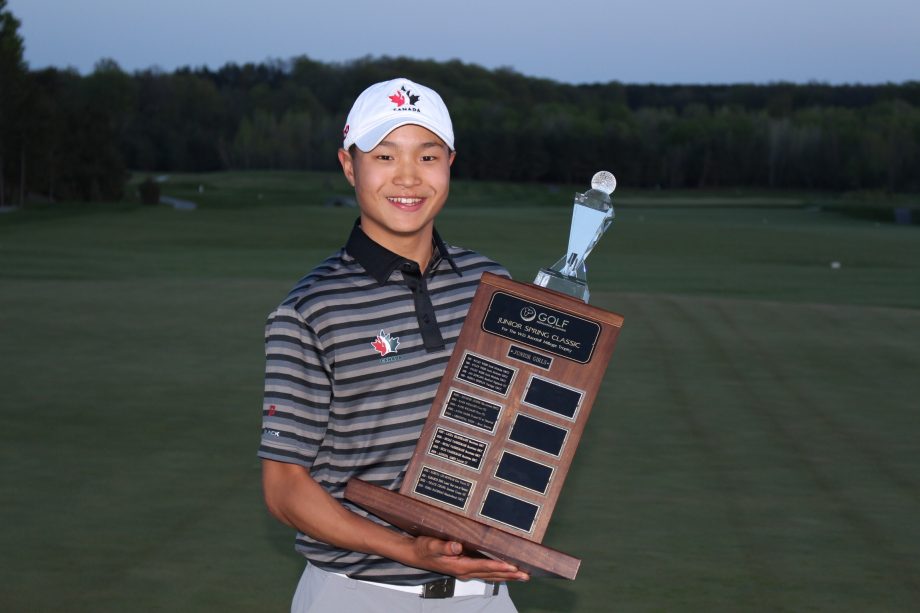 For Gil, he sat in a tie for the lead after the second round, at Wooden Sticks, with fellow Team Canada National Development Team member Carter Simon. However, Gil had one of the lowest rounds of the day, a four-under 68, to finish the tournament at seven-under. As for Simon, the Sutton resident carded a one-under 71 for a tournament total of four-under.

“My iron play was right on throughout the week.  I made a lot of good putts and didn’t make any big mistakes, so it was a good week for me,” said Gil. “The first three birdies on 10, 11 and 12 was a confidence booster and turned my game on. I was a little nervous on the first tee and cold topped it but I just thought to myself that there were 17 holes to go and anything could happen.”

Finishing in a tie for third at three-under for the tournament were Waterloo’s Trevor Ranton and Cayuga’s Charles Corner. Ranton fired a three-under 69, while Corner finished four-under 68 for the round. In fifth was Mississauga’s Conner Watt at one-under for the event after an even-par 72 final round.

Over at Sleepy Hollow, in Stouffville, Kingsville’s Alyssa Getty took a one shot lead into the final round but quickly relinquished it. Getty bogeyed the first hole while Costabile started birdie-birdie to take the lead. Costabile went on to birdie four on the back nine and finished with a confortable three-shot victory. She ended the day three-under for a tournament total of two under. Getty was one-over for the day and the event.

“I played really well today which helped me close the victory,” said Costabile. “My putts were rolling really well the past three days and most of the credit for my win is because of my putting. After nine holes I was behind but once I started making those birdies on the back nine I knew I had a good chance to win. Birdieing my first two holes, especially the second, was a huge confidence boost, even though I double bogeyed six. I was able to make a few good putts later and it all turned out ok.”

The Investors Group Junior Spring Classic Championship is a 54-hole stroke-play competition contested annually over the Victoria Day long weekend that features many of Ontario’s best male and female junior golfers. The field of competitors gained entry to the competition through a qualifying process earlier in the season. The Golf Association of Ontario would like to thank Wooden Sticks Golf Club and Sleepy Hollow Country Club for hosting the event as well as Investors Group for their continued support of amateur golf in Ontario.