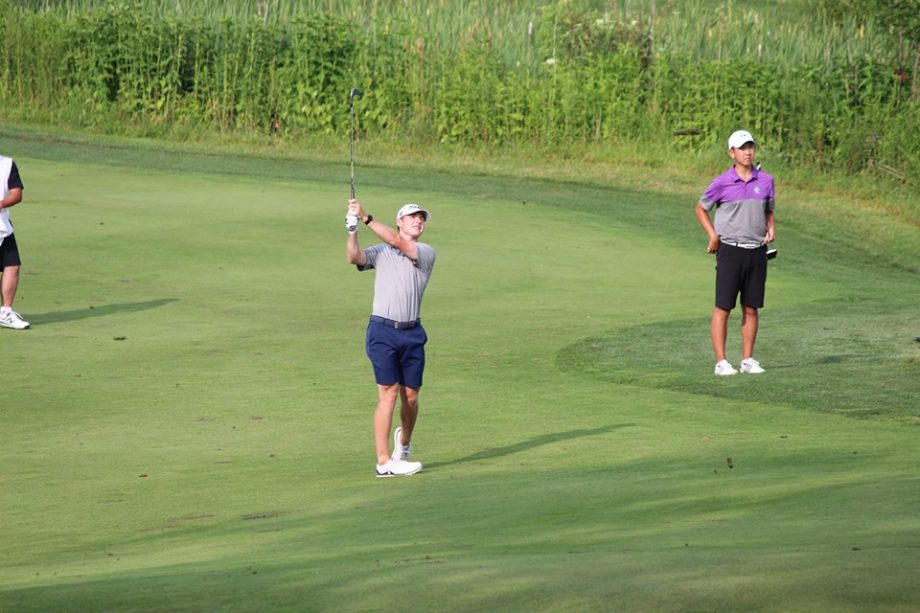 Collingwood, ON — On a beautiful Monday morning at Oslerbrook G&CC, the 97th annual Ontario Men’s Amateur Championship got underway. Dewy grass and bright skies welcomed Ontario’s best as they hit the course to try and overcome the rest of the field. Living up to expectations, the first day proved to be competitive, with three players tying for the top spot after a well played first round. Ty Celone (Public Player), Charles Fitzsimmons (Thornhill Club), and Noah Steele (Cataraqui G&CC) all came out ahead with scores of two-under (69).

It was a great showing for the three who overcame the rest of the competition. Steele played a steady game throughout the entire round, never hitting worse than par and sneaking in two birdies on the long par 5’s. The 21-year-old never over stretched his range, and made sure to stay on the narrow fairways instead of going for distance, ultimately putting him in a position to succeed.

With two bogeys, Fitzsimmons didn’t play as consistently Steele, but he made up for it with some strong play in the beginning of his back nine with back to back birdies. He later pulled ahead into his first place position with another birdie on the third, and cemented it with two pars right after.

Celone played a similar round to Fitzsimmons. With two bogeys through his first round as well, Celone kept his top spot with four birdies. He almost lost the first place position with a bogey on 17, but he saved his score with a clutch birdie on the final hole. Both Fitzsimmons and Celone will look to play more consistently in the second round in hopes of projecting them past their fellow leaders, but aren’t worrying about the bogeys in general.

“It’s a tough course, so bogeys are going to happen,” said Fitzsimmons. “I’m not going to stress about it. The par 3’s are tough and lots of people are going to shoot poorly on some holes, so it’s just all about keeping positive.”

The rest of the field trailed closely behind the leaders, with only a two stroke difference seperating the top 10 players on the leaderboard. Day two looks to be promising, as the players will be arriving in hopes of continuing their momentum from the first.