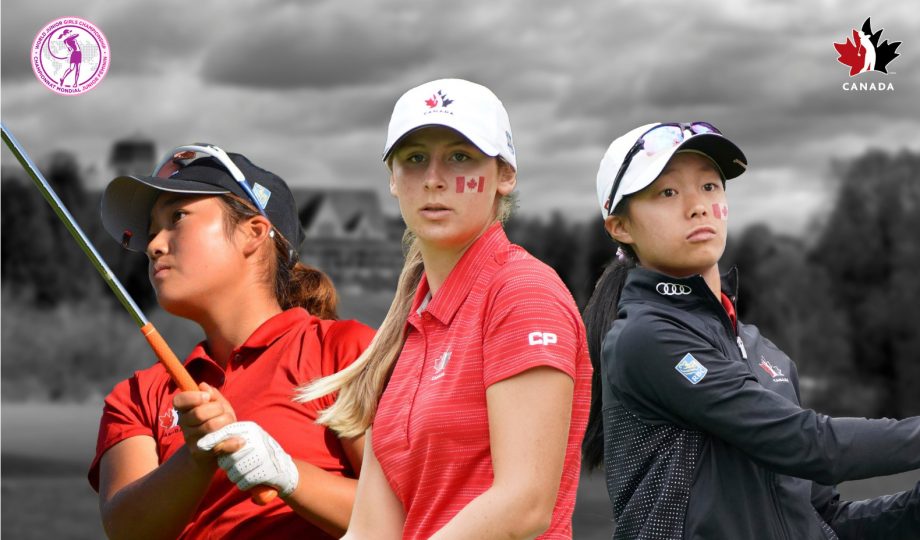 MARKHAM, Ont. –  The world’s top 18-and-under female junior golfers will return to Angus Glen for the sixth edition of the World Junior Girls Championship from Sept. 24-27. As host nation, Canada will send two teams of three athletes to compete for the international title of World Junior Girls champion.

This will be the debut for Rivers at the World Junior Girls Championship. The 2019 season marks a breakout campaign for the 14-year-old, who captured the regional Future Links, driven by Acura Quebec championship alongside top 10 finishes at the Canadian Junior Girls, Ontario Women’s Amateur and Ontario Junior Girls Championships. She’s coming off a strong performance representing Canada at the Astor Trophy last month at Royal Colwood Golf Club.

Zhu, a Team Canada Junior Squad member, will compete in the World Junior Girls Championship for a second straight year. The reigning Canadian Junior Girls champion finished at No. 2 in the season-long Junior Order of Merit thanks to seven top-10 finishes, including a runner-up finish at the Ontario Women’s Amateur.

Han is also set to make her return to the competition after teeing it up in 2017. She’s on the heels of a strong season that features eight top-10 finishes, including a runner-up at the Future Links, driven by Acura Pacific Championship and a third place result at the B.C. Women’s Amateur.

15-year-old Arora is currently ranked fourth in the Junior Girls Order of Merit. She has eight top-10 finishes this season, highlighted by a win at the Future Links, driven by Acura Ontario Championship. She placed 12th at the Canadian Junior Girls and finished in a tie for 4th at the B.C. Women’s Amateur.

Kim will make her second appearance in the event, having finished T41 in 2018. Her 2019 campaign features four victories, including a win at the Future Links, driven by Acura Pacific Championship.

“Golf Canada is pleased to select these athletes as a result of their remarkable seasons and commitment to the sport,” said Jeff Thompson, Golf Canada’s chief sport officer. “Their collective accomplishments are a result of the support and joint efforts of Provincial Golf Associations, home clubs, parents, coaches and athletes. We’re looking forward to a great championship against many of the world’s top-ranked juniors.”

“Golf Ontario is thrilled to once again partner with Golf Canada to conduct this global championship at the site of the inaugural event at Angus Glen Golf Club,” said Mike Kelly, Golf Ontario Executive Director. “We are very thankful for their membership and volunteer committees for all their hard work, and are excited to host players and coaches from around the world.”

Opening ceremonies for the championship take place on Sept. 22 followed by the first round on Tuesday, Sept. 24. The tournament’s closing ceremonies will immediately follow the conclusion of play on Friday, Sept. 27.

Admission to the competition is free. Additional information regarding the sixth annual World Junior Girls Championship can be found here.

ABOUT THE WORLD JUNIOR GIRLS GOLF CHAMPIONSHIP
The World Junior Girls Golf Championship is an annual event conducted by Golf Canada in partnership with Golf Ontario. The international competition features three-player teams of 18-and-under athletes. As host country, Canada will field two of the tournament’s 19 teams competing over 72 holes for both individual and team honours. The championship is conducted with support from the Golf Canada Foundation, Sport Canada; the International Golf Federation; the PGA of Canada; the R&A; and Levelwear. Admission and parking for the World Junior Girls Golf Championship is free. For more information, visit www.worldjuniorgirls.com.

GOLF ONTARIO
Golf Ontario is Ontario’s Provincial Sport Organization focused on enhancing participation, elevating performance and supporting the passion of golfers in Ontario. With over 100,000 individual members and 450 member clubs, Golf Ontario is one of the largest golf associations in the world. From rating courses and keeping the integral rules of the game intact, to growing the game at the grassroots level and hosting the best amateur tournaments in Canada, Golf Ontario is a passionate group dedicated to shaping lives through Golf.