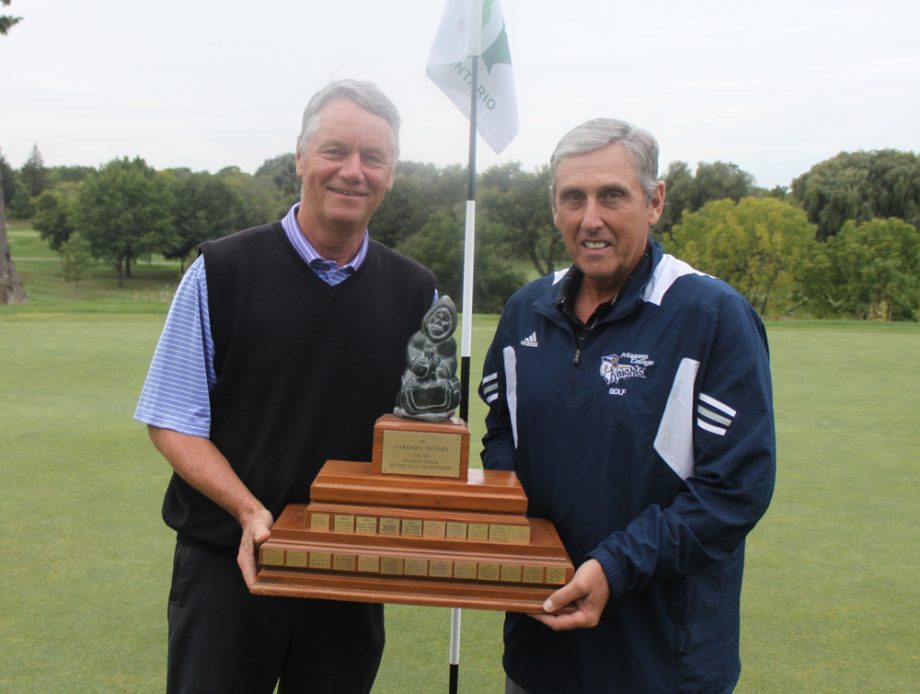 BRAMPTON, ON — The second to last event of the Golf Ontario season took place today at Brampton Golf Club with the Ontario Senior Men’s Better-Ball Championship. This was the third year in a row that Brampton hosted the event and unlike the scorcher of 2017, it was a windy cool day with some light rain scattered throughout it.

One pair that was able to handle the weather was the team of Mark Bennett from Bayview G&CC and Jim Briggs of Cardinal Lakes GC who shot an amazing five-under (66) to win by two strokes in their third attempt together at this trophy.

Afterwards the dynamic duo spoke about what it meant. “We bogeyed our first hole and after that we just played rock solid, lots of birdie looks,” said Briggs. “We made 6 birdies and could have made two or three more,” added Bennett.

The pair acknowledged they are a good team together for a few reasons. “We are both very calm and relaxed and we don’t get too serious or down,” commented Briggs. He continued with “Sharing it as a team to celebrate makes it even more special.” Bennett then summed it, “It’s pretty special, it’s an Ontario Championship and we get our names on the trophy that contains with players from the past few decades that have been the best of the best.”

They came together from a referral three years ago of all things. “Somebody mentioned Jim didn’t have a partner at a senior qualifier we were both at and I walked over and introduced myself and thankfully he said yes and gave me an opportunity,” said Bennett. This is the first provincial title for both Bennett and Briggs coming close in second place at the 2016 tournament.

There was a three-way tie for second place at three-under (68). Sharing the

silver were the teams of: Bruno Ardito and Gary Parker of home course Brampton GC, Kevin and Dan Boland, also of Brampton GC and Neil Boddington and Greg Hotham of Barrie CC.

Golf Ontario would really like to thank Brampton Golf Club and their incredible staff for hosting the event again. Thanks also to the Golf Ontario volunteers, for their continued support of amateur golf in Ontario. For complete tournament information visit the tournament site: visit here