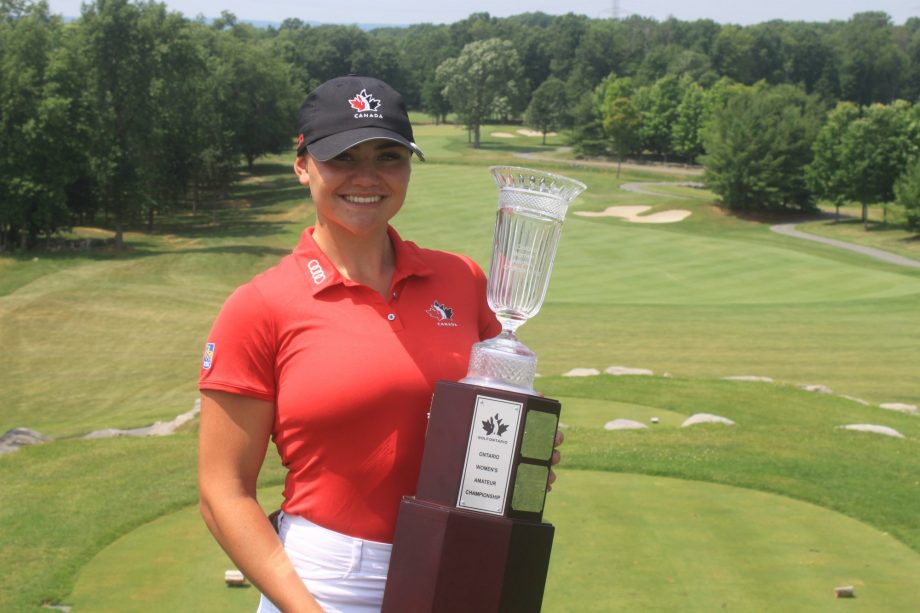 BELLEVILLE, ON – Muggy conditions kicked off the fourth and final round of the 104th annual Ontario Women’s Amateur Championships from Black Bear Ridge Golf Course. The final day would produce both an amazing comeback attempt from Emily Zhu (Team Canada National Junior Squad Member) and also an excellent display of toughness from Brigitte Thibault (Team Canada National Amateur Squad Member). This toughness allowed Thibault, who had been the leader after days two and three, to claim the title.

Zhu (National Pines Golf Club) came out very strong, carding a 4-under par 36 on the front and actually taking the lead after nine holes but Thibault battled back tying things on the 12th with a nice birdie.  The two would stay tied until late when Zhu would bogey 16 and 17. Thibault bogeyed 18 but would still claim the title by one stroke firing a final round +1 (73). Zhu would finish with the only under par round of the day, a -2 (70) and claim the silver medal. Hailey McLaughlin (Granite GC) took home the bronze medal after another steady round of +1 (73) to finish 5 strokes back of the leader.

A thrilled Thibault spoke of her win after the round. “I knew my game wasn’t clutch-clutch the past few days, but I just tried to keep my head up” she said. “I knew Emily was playing really well and she wasn’t going to go away, so I just focused on myself and I’m someone who never gives up.” She then mentioned what it means to win this particular trophy. “It’s obviously a honour, I love to see the previous winners that have all took this kind of step to where they are now. I see a lot of names from Team Canada and excited to see where this could take me.”

Golf Ontario would like to thank Black Bear Ridge Golf Course and their staff for their support of the Ontario Women’s Amateur Championship. A special thank you as well goes out to all the Golf Ontario volunteers.