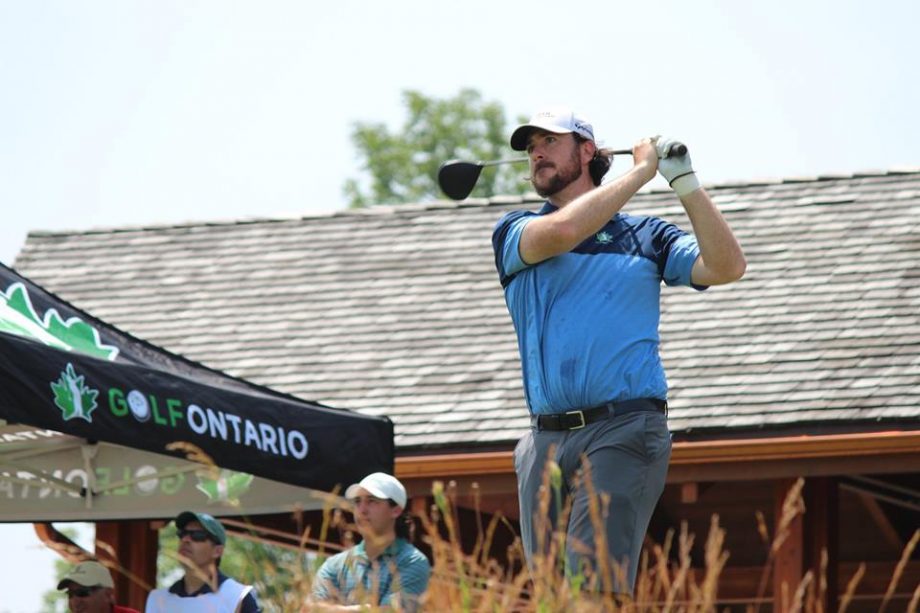 Collingwood, ON — Only 63 players remained heading into day three of the 97th annual Men’s Amateur Championship, and warm weather and beautiful greens welcomed them as they set their sights on the top spot coming out of round three and heading into the final day. Oslerbrook GC has proven to be a challenge for the players throughout the week, but the field continued to attack the narrow fairways with confidence.

After three rounds, it was Charles Fitzsimmons (Thornhill Club) who came out leading the pack going into the fourth and final day. It was a back and forth affair between Fitzsimmons and his former Team Ontario student Matthew Anderson (Credit Valley G&CC) the entire round. The two entered the third day tied at 4-under, and refused to solidify a leader until the very last hole of the day.

Fitzsimmons started the round out strong with a birdie off the first hole and continued his great play throughout, but Anderson matched every stroke Fitzsimmons took. The two ended the first four holes at 1-under each, but Fitzsimmons then bogeyed the fifth hole, allowing Anderson to take the lead. Despite the bogey on the previous hole, in Fitzsimmons style, the 31-year-old didn’t let it bother him and kept his composure to birdie the next two holes to take the lead.

Fitzsimmons led by one over Anderson for the next seven holes, until he found himself in some trouble on 13. Fitzsimmons missed a tough putt, giving Anderson the opportunity to tie the score. Anderson would then do just that, collecting two birdies in a row on the next two holes to even the score. The two sat at 7-under up until the 18th and final hole. The two teed off and for a moment it looked like Anderson would take the lead, after his drive landed centre of the fairway over 30 feet further than Fitzsimmons’. But right after, Anderson would slightly miss his second shot to land in the rough to the side of the green, while Fitzsimmons hit a perfect shot that lead to him sitting just inches from the green. At that point, it was clear who was going to take the lead heading into the final round.

“It’s funny, I had no idea that was the winning shot,” said Fitzsimmons. “I knew it was close but I always try to ignore the score.” He also commented on what it was like playing with Anderson and Celone, his former students.

“It was great playing against those two. They’re such great players and it’s always a great battle. I look forward to playing with them again tomorrow and hopefully be able to teach them another thing or two at the same time.”

Fitzsimmons finds himself at the head of the field with a score of 8-under (205), while Anderson enters round four at 7-under (206).

Ty Celone, who was the third player in the group alongside the two leaders, also had himself a spectacular day. After the third round, the former Team Ontario player sits in third place with an even-par score (213). Celone tailed the two ahead of him by only a single stroke at one point, but unfortunately triple-bogeyed the fourteenth hole. He still has the chance to catch up to the leaders, but it will be a bigger hill to climb then he was probably expecting.

The leaders and the rest of the field will return to Oslerbrook tomorrow to hopefully catch fire and heat up on the final day. Spectators are welcome at the beautiful course.