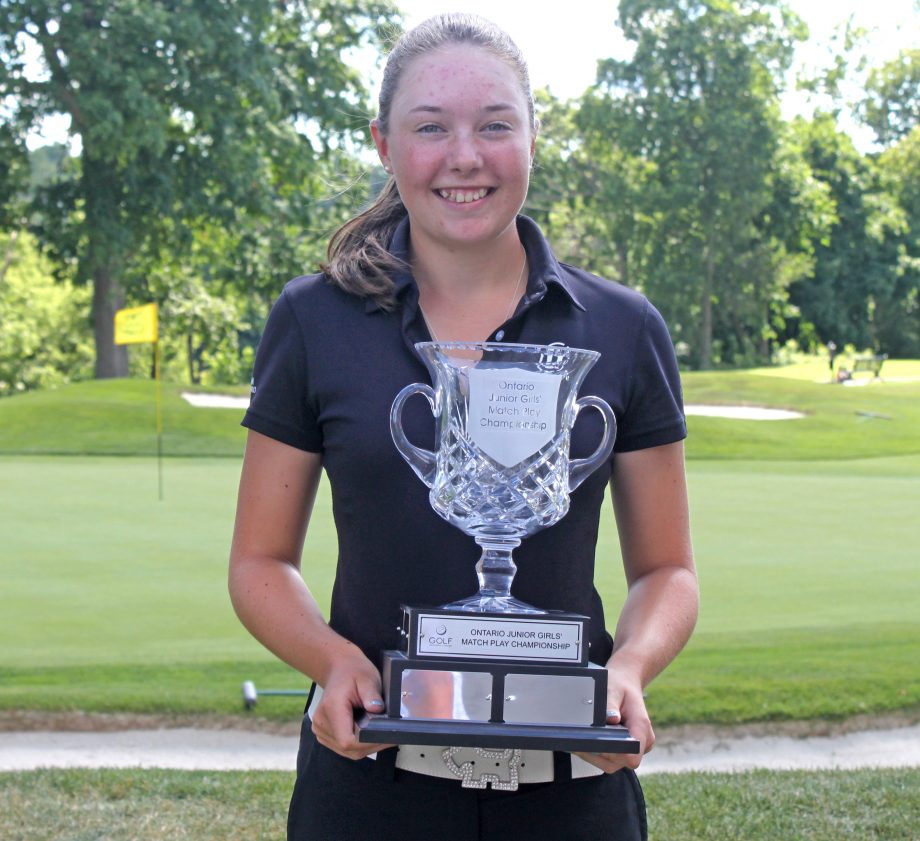 CAMBRIDGE— Team Ontario member and Ottawa resident Grace St-Germain became just the second player in the history of the Golf Association of Ontario’s (GAO) Junior Girls’ Match Play Championship to repeat as champion. St-Germain, 15-years-old from the Hylands Golf Club, took the win on July 4 with a 1up victory over Burlington’s Madison Easterbrook.

St-Germain got out to a good start taking the first hole. At the turn she was 2up, and at one point on the back nine she led by three. However, Easterbrook mounted a comeback and was just 1down heading to the 17th hole. Easterbrook would take the hole squaring the match with one to play. Both players put their second shot passed the green on 18, but both manage to get their third to within makeable putting distance. After Easterbrook missed her putt, St-Germain had the chance to win the match with hers and did just that.

“It feels really good to win back-to-back,” said St-Germain. “I put a lot of effort into it and everything worked out.”

To reach the finals, St-Germain overcame fellow Team Ontario teammate, Richmond Hill’s Monet Chun (3&2) in the semi finals, Crystina Kertsos (1up) in the quarter finals, and Hailey McLaughlin (7&5) in the opening round.

“My hardest match would have been the finals against Maddi. Monet put up a really good fight in the semis too. It was a good match we both don’t talk much, but still spoke a bit during the match.”

As for Easterbrook, 18-years-old from Whistle Bear Golf Club, she defeated Guelph’s Katie McTaggart (3&1) in the semis, Grafton’s Danielle Sawyer (1up) in the quarters, and Kingsville’s Alyssa Getty (4&3) in the opening round.

Despite having a 3up lead, St-Germain gave full credit to Easterbrook for her comeback. “She played really well! She won a couple of quick holes and we were back to being even. I was really nervous when we were all square after 17. I knew 18 was a hard hole so I just tried to play it smart.”

After seeing Easterbrook miss her putt on the 18th hole, St-Germain remembers how she felt starring down her final putt. “I was standing over the putt and I was just shaking. I thought to myself ‘you have made these before’ so I just stepped up and hit it.”

Looking back on the week, St-Germain recognized that her improved putting was a major reason why she was able to repeat. “I putted pretty well, which helped me today and yesterday. I have been working on putting a lot lately.”

For St-Germain, she will now turn her attention to the Investors Group Junior Girls Championship, the Canadian Women’s Amateur and Nationals.

The Junior Girls’ Match Play Championship has been contested since 1982. Female golfers under 19 years of age before August 1 are eligible to compete. Seeding was determined by the results from a qualification round held on July 2. Notable past champions include: Alena Sharp, Stefi Markovich, Christina Yoon, and Elizabeth Tong.