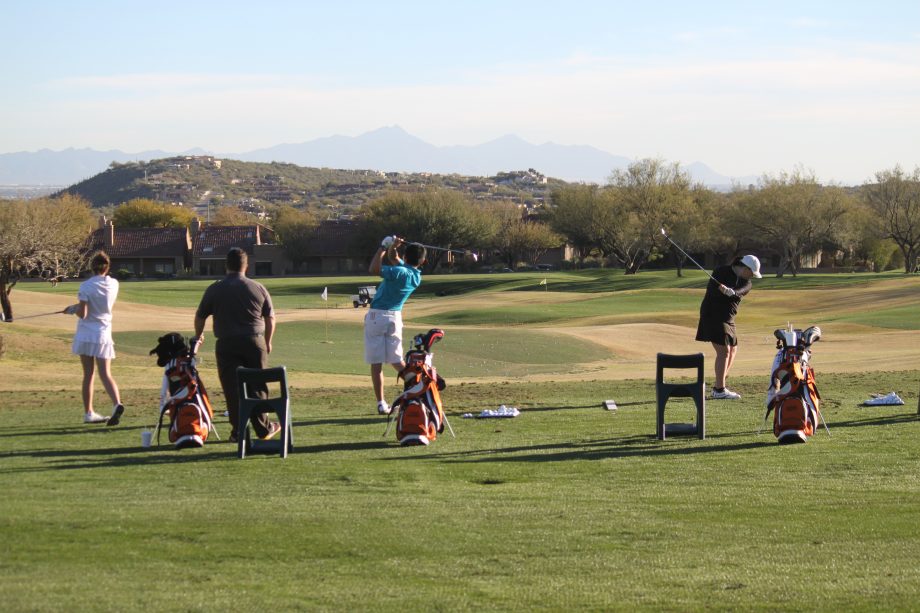 TUCSON, AZ— The Golf Association of Ontario’s (GAO) Junior (U19) Team Ontario recently wrapped up a five-day training camp in Tucson, Arizona, Feb. 12-17, at the Lodge at Ventana Canyon.

After the days of training and four rounds of golf, coach Reggie Millage gave his thoughts on the camp.

“Ultimately the goal of the camp was to see how everyone was progressing through the winter and to catch any possible lapses in training, both physically and technically,” explained Coach Millage. “It gave us a chance to see how they are doing in their time away from us.”

Millage set up a central theme for the camp around the players’ short game. It worked out well considering the facility’s driving range was not long enough to accommodate some of the players’ drives. There were however, multiple putting greens and a separate short-game area, which included a bunker. “I like to spend time on the short game when there is such a great short-game facility as there is here. It is something that is difficult to do indoors during the winter, but here the players can get a full swing in. It was also one of the weaker areas we identified with the players in the fall. Shots around the green were the areas that needed the most improvement.”

Millage said that this camp differed from the team’s first trip to Arizona in January because they had a better idea of what to cover. “We tried to focus on competition during this camp. We created an Olympic-style theme to try and motivate the players and increase competition. It made the testing a little more fun, but also gave us the feedback we needed.”

The structure of the camp seemed to be a plus with many of the team members. “I really liked the extensive practice,” said team member Trevor Ranton, from Waterloo. “I liked the (team themed) matches, the stations and a little bit of free time to work on what we felt needed to be addressed.”

The results seemed to be there for Millage. “I think some of the numbers in testing were much better than the fall, but they didn’t necessarily translate into lower scores on the course… yet. I do feel that it will. Overall, their chipping, bunker shots and putting were much improved. Score wise it was a little disappointing but you have to remember that desert golf is much more punishing off the tee, resulting in more penalty strokes.”

Despite the scoring, Millage seemed satisfied with the camp overall and continues to see them as beneficial. “Holding these camps is great for a few reasons. The camaraderie is one, as the team gets to spend time together. Golf is mainly an individual sport, this is a chance for them to be part of something together. It also pushes them and they seem driven by being in groups.”

Even though some of his players couldn’t hit driver on the range, Millage had nothing but praise for Ventana Canyon, a site that the GAO has used for four years now. “It is a beautiful setting that is in great condition. We utilized the terrific short-game facility and even worked on drivers on one of the holes.”

Millage went on to say that the facility also helped enhance Strength and Conditioning Coach/ Physical Therapist Andrew Hoermann’s interaction with the team.

“I really enjoyed the morning workouts with Andrew,” added team member Jason Chung. “I wish we could have stayed longer.”

With the training camp complete, Millage can look ahead to how the team is shaping up for the season. “I hope that with the testing they gained confidence that they can build off of.  Being on the team I expect them to perform at a high level during the season. I want them to take advantage of the opportunities they have.”

Even though it is only February, Millage pointed out at the teams’ final dinner that the golf season is just two months away and that it is time for the athletes to get their training and repetition in gear.

The team will have one more team activity together before the season begins, as they will be in Myrtle Beach in March as they prepare for the CAN/AM matches competition. After that, the players will go their separate ways and begin competing in the many tournaments offered this season, Millage hopes that their offseason training will be put to good use so that they can achieve results this summer. “Ultimately we want them to use Team Ontario to further their progress and achieve the next level in the sport, whether that be the National Team or an NCAA Scholarship.”