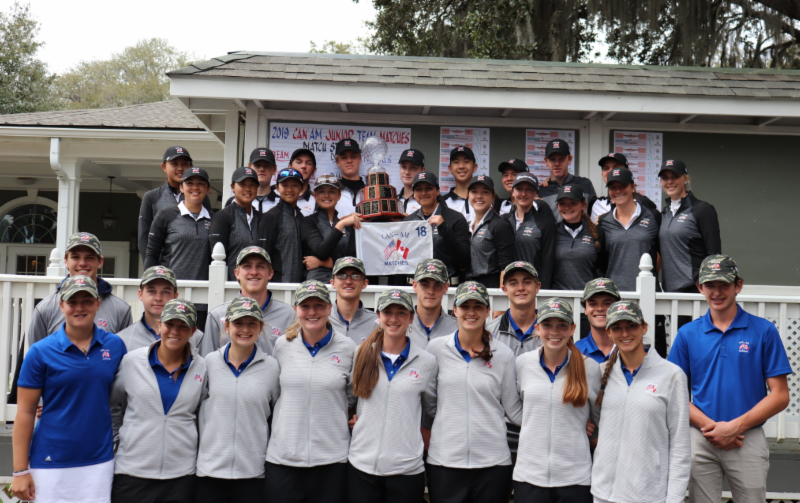 Murrells Inlet, S.C. – After establishing a healthy lead following the first round of the Can-Am Junior Team Matches, the Ontario juniors held off the South Carolina team and earned the title as 2019 Can-Am victors at Wachesaw Plantation Club 37.5-34.5. The weekend featured the top eight ranked male and female junior golfers from the Golf Association of Ontario matched up against the top eight male and female juniors from South Carolina as of the December 2018 Heritage Classic Foundation Rankings in this annual event.

The Ontario squad went in to the final round with their largest lead in the history of the matches with a five-point lead following Saturday’s four-ball match play format. As the young ladies led off, they were greeted by cooler temperatures but mild winds and partly cloudy skies. The Sandlappers made a run at the front end of the final round with Elle Johnson (Inman) tying her match. Lexington’s Molly Hardwick earned a shut out three-point victory in the second match and Anna Morgan (Spartanburg) clawed her way into earning two of three points after draining a must make 18 foot putt on the final hole that slammed into the back of the cup to win. That was about all of the smiling for the American girls as Ontario ladies never let their foot off the gas. Hailey McLaughlin(Markham, ON) won two of three points, Emily Zhu (Richmond Hill, ON) followed up a seven-birdie performance on Saturday with a similar showing against Lexington’s Isabella Rawl on Sunday winning three points. Victoria Zheng (Markham, ON) and Ellie Szeryk (London, ON) earned five-and-a-half of a total six points while Jensen Castle (W. Columbia) halved with five-time participant Monet Chun (Richmond Hill, ON). In total the Ontario ladies added another five points on the board for the team putting the American squad trailing by 29-19 after the first day and a half.

The South Carolina boys needed a lot of points to overcome the deficit and did their best. Seth Taylor(Gaffney), Holden Grigg (Myrtle Beach), Bronson Myers (Columbia),Drayton Stewart (Charleston) andGene Zeigler of Florence all earned points for the SC squad with Stewart making the only three point sweep. However, while the U.S. Team staged a worthy comeback effort the year belonged to Team Ontario inching out the South Carolinians 37.5-34.5 and sealing the victory for the first time since 2010.

It was a consensual feeling from all those involved that it was a great weekend of golf and for golf from both Golf Ontario and South Carolina Junior Golf Association players. The scoring format for these Matches, ensuring each Match finishes on the beautiful 18th hole with a backdrop of the Intracoastal Waterway, consists of three points per match. In the event of a tie, each team gets ½ of a point.

It should be noted that the matches are less about the competition and more about building relationships and celebrating the growth of Junior Golf in both Ontario and South Carolina. The Wachesaw Plantation Club members and staff make this a truly unique event and the relationships that have been built between the two countries, as well as the membership, shows the impact the game of golf can make. The Team Ontario victory of the Matches puts the record at 17-4 in the win-loss column in the 21-year history of the event in favor of the U.S.

A special note that this event would not be possible without the continued support from Wachesaw Plantation, multiple individual sponsors and more specifically a group of its members who help fund this event, appropriately named the “Wachesaw Warriors.” To date the Wachesaw Plantation Club membership has generated nearly $500,000 for this event and SC Junior Golf since they began hosting the matches in 2002. Also, a special thanks to all of the host families that housed some of the players this year.