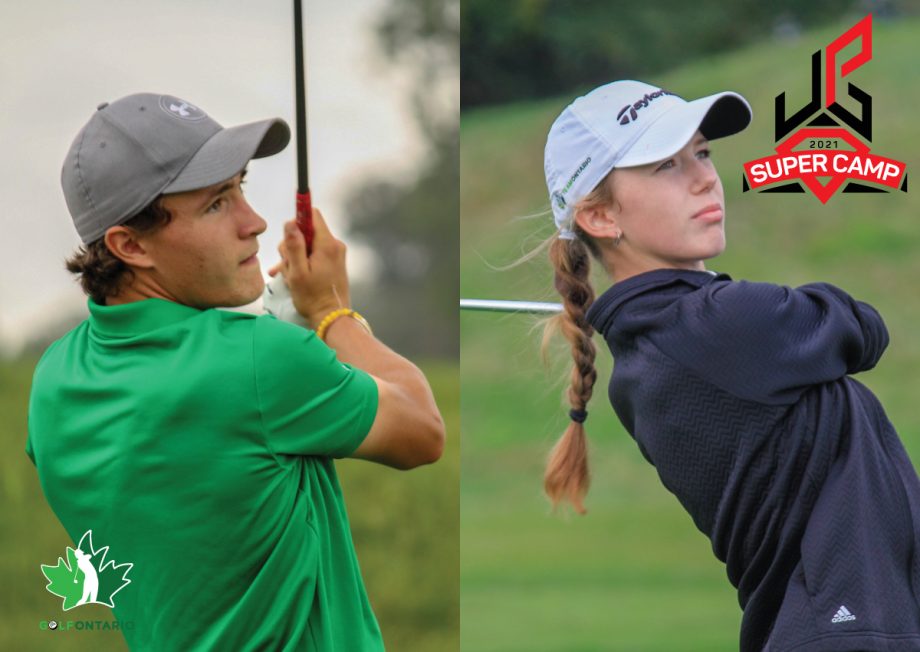 Windsor, ON – Day two of the second annual Tour Championship from the 2021 Ontario Provincial Super Camp at Ambassador Golf Club, saw players making massive moves up the leaderboard. The camp featuring the top 64 junior boys and girls in the province, battled a cool breezy morning and humid afternoon on the challenging course.

Team Ontario member, Ella Weber (Rattlesnake Point GC), set the pace for the girls on day two with another strong outing. She leads after a solid one-under (70) to sit three-under overall after 36 holes and carries a two-stroke lead into tomorrow’s final round. In second is a three-way tie with one-over totals between Carlee Meilleur (Loyalist G&CC), Joline Truong (Trafalgar G&CC), and Tara O’Connor (Victoria Park East GC). Meilleur was the leader after day one and had a four-over (75) round, while Truong, our 2021 Ontario Juvenile (U17) Champion, fired an even-par round (71), and O’Connor finished with a one-over (72) day. Round of the day belongs to Lindsay McGrath (Rattlesnake Point GC) with a stellar two-under (69), to sit in a tie for fifth with Team Ontario member Alissa C. XU (Station Creek GC) at two-over in total.

The boys decided to crush their day with many red scores filling up the top of the leaderboard, and most of them being Team Ontario players. Taking the lead on the boy’s side after 36 holes was Team Ontario member Ben MacLean (Cherry Hill Club), after a brilliant seven-under (64), a perfect card with seven birdies. That leaves him with a seven-under total after two rounds with a two-stroke lead. Outdoing him on the day unbelievably though, was teammate Ryan Somerville (Summit G&CC) who recorded a dazzling eight-under (63) to climb his way up the leaderboard into second place. Third place sees a trio of Team Ontario members, all at four-under after 36 holes, with Thomas Latter (Credit Valley G&CC), Andreas Diogenous (Whistle Bear GC), and Matthew Martel (Lookout Point CC). Also in the hunt with under-par totals are Justin Matthews (Bigwin Island GC), Team Ontario player Owen Kim (Blue Springs GC), Isaiah Ibit (Greyhawk GC), Michael Weber (Rattlesnake Point GC), and Zachary Smith (Brampton GC). With so many players in the mix, tomorrow’s final round is shaping up to be something special.

Moving forward, competitors of the annual Ontario Provincial Super Camp and Tour Championship will be battling for the Dave Mills trophy. The trophy has been named in honour of Mills, a past Golf Ontario Executive Director and huge supporter and advocate for junior golf, who presented the first ever Super Camp trophy in 2020. Current Executive Director of Golf Ontario, Mike Kelly, and members of Dave Mills family will be on hand to present the trophy tomorrow.

For more information on the 2021 Ontario Provincial Super Camp and Tour Championship, visit our Golf Genius page. Final round action begins at 8:30 am Friday with the boy’s off first.