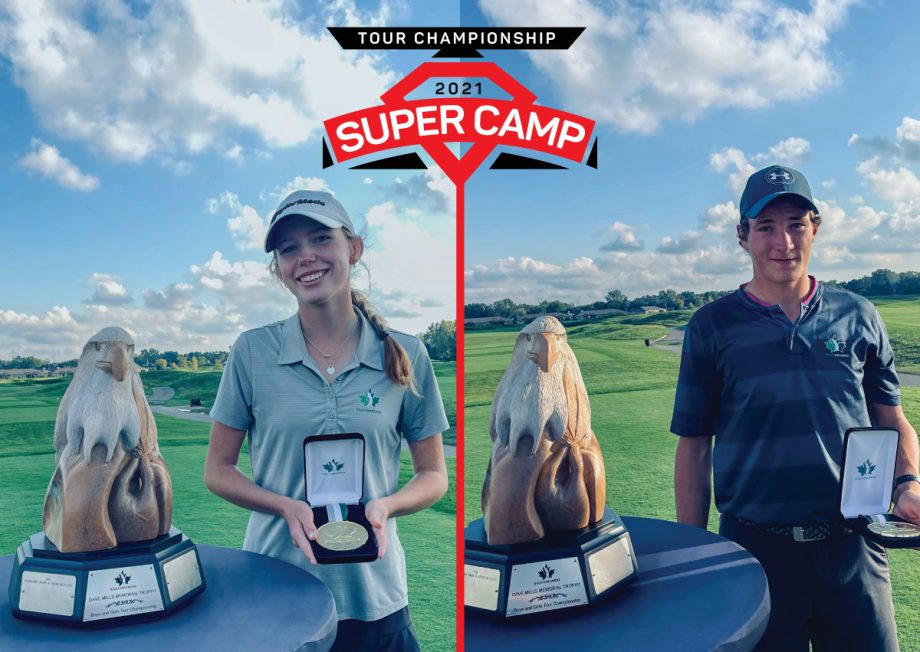 Windsor, ON – An incredible day and week from Ambassador Golf Club for the 2nd annual Ontario Provincial Super Camp, concluded with the crowning of champions and an emotional presentation of our newest trophy. The second annual Tour Championship featured the top 64 junior boys and girls in Ontario, and today they fought a day of tough competitors and varying weather conditions in their quest to come out on top. Team Ontario members on both sides filled up the vast majority of top spots in both the girls and boys divisions.

36-hole leader Ella Weber (Rattlesnake Point GC), a Team Ontario member, once again led the entire day to claim the girls division. She came out victorious after a two-over (73) to finish one-under overall on the championship.  Capturing silver is Carlee Meilleur (Loyalist G&CC), the leader after day one, with a strong even-par final round (71). Finishing third at two-over overall is Ashley Lafontaine (Royal Ottawa GC) with a strong two-under (69), the only under-par score of the day for the girls.

Taking home her first Golf Ontario Championship title of the season and leading in the U17 Junior Golf Pathway Standings, Weber said “It feels good. This is very up there in my career. It’s my second win in my last three tournaments.” Over the three days of competition, Weber was pleased with her play, she commented “I was hitting the ball very solid and I was making a lot of putts down the stretch.”

On the boys side, Team Ontario players picked up where they left off yesterday and attacked the course putting up low numbers once again. Second round leader, Team Ontario member Ben MacLean (Cherry Hill Club), followed up his strong seven-under (64) yesterday, with a terrific six-under (65) to be crowned the boys champion at thirteen-under on the championship. On his heels all day with a strong front nine was fellow Team Ontario member Owen Kim (Blue Springs GC), recording a brilliant six-under (65) as well and finishing three strokes back at nine-under. While Kim claimed the silver medal, bronze was tied between two more Team Ontario members, Andreas Diogenous (Whistle Bear GC) and Thomas Latter (Credit Valley G&CC), both shooting a two-under (69) and recording a six-under overall.

Claiming his first Ontario Championship win of the season, MacLean said “it’s a great feeling to finally come out on top.” He also added, “I’ve been close all summer and had some really strong finishes but taking this title means a great deal.” When asked what the strongest part of his game over the competition was, MacLean commented that “I was doing things well, felt comfortable in my game and that helped me relax through the round. A nice eagle chip-in from 27 yards out helped the rest of the day out.”

An emotional ceremony followed afterwards in the presentation for the newly created Dave Mills trophy. The trophy has been named in honour of Mills, a past Golf Ontario Executive Director and huge supporter and advocate for junior golf, who presented the first ever Super Camp trophy in 2020. Members of Dave Mills family were on hand to present the trophy. His son John Mills spoke after, while fighting some tears about the trophy and his father. “This event was very special to him; his life was his family but it was also golf and all of you. It was his passion.” He added his dad “was looking down and smiling”.

The soapstone trophy was carved by Canada’s foremost Ojibway sculptor Kris Nahrgang, who was able to meet with Mills before he passed. He sent this message along to describe his work. “As we all try to gain success in a sport we love, some people ensure that we are recognized for the achievements we attain. Dave Mills was that man. His work in our sport was reliable, and done with a maturity, and class which made one feel important the very moment you met him. In my Indigenous Culture when we obtain recognition, we are presented with an Eagle feather. In this tribute piece, I have created a visual of an Eagle feather being presented by the hand of this great man. The Eagle is a messenger and it flies between the real, and the spiritual realm, and converses with the Creator to ensure we as people, are doing well. This piece is to recognise the man, and the spirit of this honour that you have received this day. His love for this sport, and the goal to offer support for your efforts will never be forgotten, and he will now be here in Spirit to present you with this honour of your achievement. Congratulations today, and into the future!”

Golf Ontario would like to thank the players, rules officials, and staff for their support of the 2021 Ontario Super Camp and Tour Championship. To Ambassador Golf Club and your team – Director of Golf: Adam Wagner, Head Professional: Alex Zappio, Super: Steve Hatch, Food & Beverage Manager: Diane Farguar and her team, and Head Chef: Daniela Palanka – Thank you for being such amazing hosts through this week of challenging weather conditions.

Once again, a massive thank you to Taylormade, who gave away eight wedge sets in total (including their new Milled Grind 3 MG3 wedges), and as well as great swag in hats and balls, and hosting the Tuesday Super Camp Southern Cookout. Also, a big thanks to Lululemon Windsor, for their donations and raffle prizes!