UXBRIDGE — The Golf Association of Ontario (GAO) is very pleased to name the 2015-16 rosters for the Under-17 High Performance Regional Team Program.

The program, which debuted in 2013-14, was well received in its initial season and expanded in 2014-15 from three to five teams. Once again in 2015-16, the program will sport five squads from across the province. The team members were selected based on their 2015 tournament scores, 2015 GAO Order of Merit standing, as well as testing results from GAO Skills Combines held earlier this fall.

The five teams in 2015-16 will be Ottawa, York, Waterloo, Essex-Kent and Niagara. The program will see 54 promising young athletes on the various teams, which will include monthly technical and physical training at a regional centre and a five-day camp during March Break in South Carolina. The teams will also compete in the Team Ontario Cup, with members of the GAO’s provincial team, to be played at Grand Niagara Golf Course in Thorold, April 22-24.

“We are extremely excited about the upcoming season for our five regional teams,” said Mary Ann Hayward, GAO Manager of Sport Performance. “The regional teams continue to be a great feeder system for Team Ontario and the Team Ontario Cup is a great culminating event for our high performance athletes.”

Team Ottawa is made up of athletes from Ottawa and surrounding areas in Eastern Ontario. Adam Holden coaches the team and Allen Hicks is the team’s strength and conditioning coach. They will train out of the Kevin Haime Golf Centre in Kanata and the Ottawa Athletic Club.

For more information on the team and its players visit the Team Ottawa page at: https://gao.ca/team-ottawa/

Team York covers Toronto and the GTA. Jeff Overholt coaches the team and the strength and conditioning coach is Nick Martichenko. Team York will train out of Peak Performance Golf in Vaughan.

For more information on the team and it’s athletes visit the Team York page at: https://gao.ca/team-york/

Team Waterloo is made up of players from the Kitchener-Waterloo and surrounding area. Mike Martz coaches the team and their strength and conditioning coach is Angella Lee. They will train out of the Golf Performance Centre at Whistle Bear Golf Club in Cambridge.

For more information on the team and it’s players visit the Team Waterloo page at:

Team Niagara is comprised of golfers in the Niagara region, which includes Niagara Falls, St. Catharines and surrounding area. John White coaches the team and the strength and conditioning coach is Wayne Oliver. They will train out of Beechwood Golf & Country Club, in Niagara Falls and the Niagara Falls Sportsplex.

For more information on the team and it’s athletes visit the Team Niagara page at: https://gao.ca/team-niagara/

Team Essex-Kent is made up of golfers from the Windsor and South-Western Ontario area. Randy McQueen coaches the team and the strength and conditioning coach is Ryan Carlone. They will train out of Roseland Golf & Curling Club, On The Green Indoor Golf (OTG), Dominion Dome, Silver Tee, and Tecumseh Golf.

For more information on the team and it’s athletes visit the Team Essex-Kent page at: https://gao.ca/team-essex-kent/

ABOUT THE REGIONAL TEAM PROGRAM

The Regional Team Program is designed for golfers under the age of 17. A combination of skills combines results, tournament results and current Order of Merit standings, determine the players that are selected for each team. Team members take part in an eight-month training program with a PGA of Canada certified head coach and strength and conditioning consultant. They participate in multiple local winter indoor training sessions before a March break training camp in Myrtle Beach and the Team Ontario Cup competition to be held in Niagara at the end of April.

UXBRIDGE – The Golf Association of Ontario’s (GAO) U19 Team Ontario and five U17 Regional Teams (Ottawa, York, Waterloo, Essex-Kent and Niagara) are gearing up for the inaugural Team Ontario Cup this weekend, which will see all of the teams compete against one another. The event will take place April 24-26 at the Grand Niagara Golf Club in Thorold.

The athletes will compete in a two-day, 36-hole team-format competition with main emphasis being on team results. Results will be determined by taking the three lowest of four team member scores each day for a team gross total. Low gross individuals will be also be recognized, over the 36 holes, in Juvenile and Bantam age categories for both boys and girls, along with an overall boys and girls champion.

“This is the first event of it’s kind and we are extremely excited to see all the Team Ontario and Regional team athletes competing in the same event,” said Mary Ann Hayward, GAO Manager of Sport Performance. “They have been training as teams for the past seven months and this is their opportunity to go head-to-head. It is a great kick-off to their competitive season here in Ontario and the preparation they have done leading up to the Team Ontario Cup should help them to be much better prepared for the important event qualifiers that begin in early May.”

The event will also be used to select the team for the Ontario–Quebec Matches that will be held July 27-29 at Smugglers Glen Golf Club in Gananoque. The top two juvenile boys and girls and the top four bantam boys and girls from the regional teams will be selected to the Ontario team that will compete in the matches.

In addition, the GAO will take the opportunity to conduct testing of all Team Ontario and Regional players. Players will go through a trackman analysis, physical combine testing and a putting test. The purpose of this testing is to gage how the athletes have improved over the winter training months.

The highlight of the Team Ontario Cup will be the banquet held on April 25 at Legends on the Niagara Golf Club. All teams will be in attendance and many family members will also attend. Each team has selected their own award winner for Most Valuable Contributor (MVC) and these MVC winners will be recognized at the banquet. The MVC award goes to the person on the team that best exemplifies: leadership, integrity, sportsmanship, team spirit and work ethic.

The Team Ontario Cup will be a great event to kickoff the tournament season in Ontario and will showcase the finest junior golfers in the province. Tee times for the competition will be from 9 a.m. to 10:45 a.m. each day, April 25-26, with play starting on both the first and 10th tees. Trophy presentations are scheduled immediately following the completion of play on Sunday, which will be approximately 3 p.m.

GAO Regional Team Program back and bigger in 2015 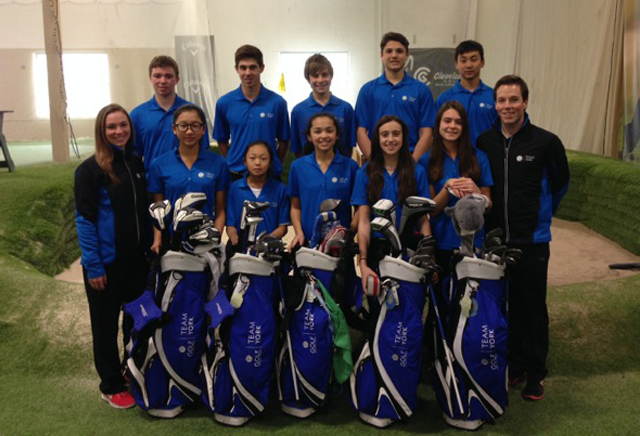 UXBRIDGE— After a successful run as a pilot project in 2014, the Golf Association of Ontario (GAO) is pleased to announce that the Regional Team Program will return in 2015. The second installment of the program will be even bigger this coming year with the addition of teams in Essex-Kent and Niagara to the current stable of Ottawa, York and Waterloo.

“The GAO is thrilled to continue this important and exciting program as we strengthen our commitment to developmental high performance in Ontario,” said Mike Kelly, Managing Director of Sport.

The Regional Team Program, in partnership with the Ministry of Tourism, Culture and Sport, is designed for golfers under the age of 17. Players participate in regional fall combines and 12 players are selected to fill each of the teams. Team members then take part in an eight-month winter training program with a PGA of Canada registered head coach and strength and conditioning consultant. They participate in 11 three-hour sessions before a spring training camp and Regional Team Competition with Team Ontario in April 2015.

Selection for the teams are based on the skills combines, 2014 GAO tournament performance and GAO and other junior Order of Merit Standings. To be eligible, golfers must be in good standing with the GAO, have unquestioned amateur status and be a resident of Ontario.

The Regional Skills Combines are made up of a series of assessments in full swing, short game and physical fitness screening and will be conducted by PGA of Canada regional and provincial coaches.

The combines for the 2015 teams begin in early September, starting with Ottawa’s Sept. 6-7 at the Kevin Haime Golf Centre in Kanata; Waterloo’s are Sept. 6 and 20 at the Golf Performance Centre in Cambridge; Niagara’s take place on Sept. 14 and 20 at The Legends on the Niagara in Niagara Falls; York’s are Sept. 20-21 at Angus Glen Golf Club in Markham; and Essex-Kent are yet to be determined.

For more information on the combines and to register visit https://gao.ca/excelling-performing/athlete-development/skills-combines/ or contact Manager of Sport Performance Mary Ann Hayward at 905-852-1101 ext. 239 or email mhayward@gao.ca