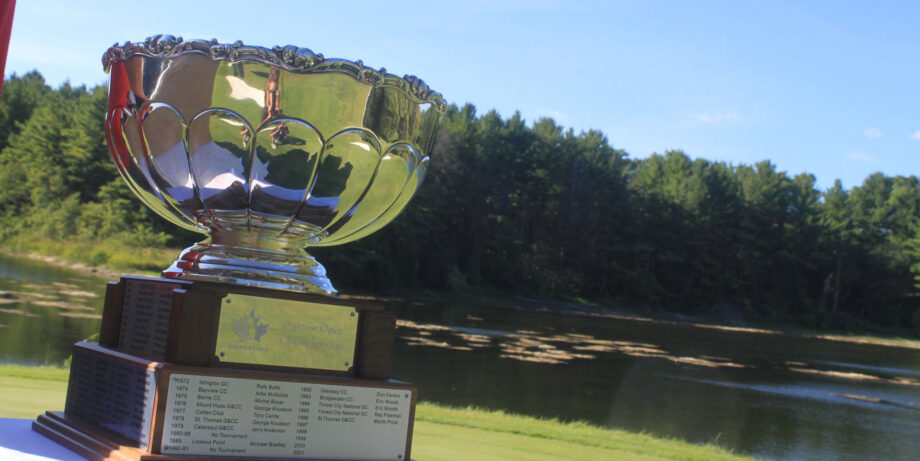 “This is an important day not only in the history of PGA TOUR Canada but also for golf in Ontario,” Pritchard said. “The Ontario Open is a historic and important part of the golf landscape in this part of the country, and it’s important that it returns to its previous stature. To have a company like Sotheby’s International Realty Canada partnering with the Ontario Open ensures that this will take place.”

The Ontario Open was an annual event, starting from its inception in 1923, not even taking time off during the Second World War when numerous tournaments did shut down. Winners during the tournament’s first iteration included Canadian legends George Knudson (five victories), Moe Norman (three victories) and World Golf Hall of Fame member Sam Snead, who captured the 1940 tournament. The Ontario Open began again in 1989, with former PGA TOUR player Michael Bradley winning the event. Various clubs in Ontario hosted the tournament between 1992 and 1996 before the tournament took a 21-year hiatus, beginning in 1997.

“As one of the oldest and most storied golf championships in the world, the Ontario Open has a reputation for attracting the best golfers nationally and internationally. Our sponsorship of this tournament is not only a reflection of our company’s commitment to contributing to the communities in which our clients live, work and play, it is a reflection of our commitment to celebrating and aligning with professional excellence, whether in sport or in business,” Kottick said.

Woodington Lake Golf Club opened in 1995 and is celebrating its 27th season offering championship golf to Southern Ontario. The Legends Course first hosted the tournament in 2019—its first playing in 40 years—when it was not affiliated with PGA TOUR Canada. England’s Greg Eason, a PGA TOUR Canada veteran, won the tournament. Woodington Lake and the Legends Course will again host the 72-hole, medal-play event that is the sixth tournament on the 11-event PGA TOUR Canada schedule. It will offer full Fortinet Cup points to all players who make the cut and will help assist in which players move on to the 2023 Korn Ferry Tour.

“From our ownership group and all of our dedicated staff, we are thrilled to be hosting the Sotheby’s International Realty Canada Ontario Open at our beautiful facility here at Woodington Lake. Marrying together a partner with the legacy of Sotheby’s and such a historic golf tournament on our Legends course is a privilege, and we look forward to growing the event together for years to come. We’re also excited to host once again The Ontario Disabilities Championship early in the week,” said John Chetti, Partner in Woodington Lake Golf Club.

The Ontario Disabilities Championship promotes awareness and participation for golfers with disabilities and provides a platform for future-talent identification. Up to 60 participants will contest this 36-hole stroke-play championship July 25-26.

Golf Ontario CEO Mike Kelly said, “We are thrilled to see the Ontario Open return as a regular event on the summer golf schedule, and Sotheby’s International Realty Canada’s involvement puts this tournament on strong footing.”

The Sotheby’s International Realty Canada Ontario Open is the sixth stop in the race for the Fortinet Cup, the points-based competition that mirrors the competitive structure on the PGA TOUR, PGA TOUR Champions and PGA TOUR Latinoamerica. The Fortinet Cup will offer a $100,000 player bonus pool—with $25,000 to the winner—to the top Fortinet Cup points-winners will earn membership on the 2023 Korn Ferry Tour. The No. 1-ranked player at the end of the season earns Player of the Year honors and is eligible to play in every open Korn Ferry Tour tournament the following season.

#GOLFCANADAGOLF Campaign Unites Canadians’ Passion For Golf – The Number One Participation Sport In The Country!

Canadians from points far and wide encouraged to share their stories at: www.golfcanadagolf.ca and get involved all season long using #GolfCanadaGolf

(June 25, 2015) –With nearly 5.7 million Canadian golfers and 60 million golf rounds played annually, it’s no surprise golf is the number one participation sport in the country and the anchor for a newly launched initiative at GolfCanadaGolf.ca to herald the love of the game.

Earlier this spring, a collection of golf industry leaders gathered to create the Golf Canada Golf campaign to invite Canadians to share their stories and show their support for Canadian golf.  This upcoming Canada Day holiday, golfers from all points far and wide in Canada are encouraged to add their nostalgic story about the great game of golf with a special incentive; the most compelling submissions have the chance to be profiled during the upcoming RBC Canadian Open.

“The Golf Canada Golf campaign welcomes Canadian golfers from all corners of Canada, walks of life and ages and stages to share their personal stories and special connections to the game,” shared Gavin Roth, Chief Commercial Officer with Golf Canada.

Since its spring launch, the campaign has logged more than 100 story profiles to www.golfcanadagolf.ca, more than 10,000 story views and over 1.75 million impressions through social media.  Stories have been shared from regions across Canada and the hashtag #golfcanadagolf has been gaining momentum in the weeks since the campaign launched.

As part of the campaign to profile the game of golf, a custom website – www.golfcanadagolf.ca – was developed to feature a mix of stories, from professionally filmed feature segments to personal submissions by golfers with a unique story to share.

“We’re excited that Canadian celebrities, like former Toronto Maple Leaf Wendel Clark and Canada’s top-ranked player on the Women’s World Ranking Brooke Henderson have joined in to support the campaign, in addition to a number of feature stories that were filmed to launch the campaign,” added Roth.  “Canadian LPGA Tour player Alena Sharp also shares her story – a tribute to the impact her dad had on her golfing career – as part of the campaign’s family focus.”

The site also features a social media hub that curates stories using the hashtag #golfcanadagolf as well as resources for golfers looking to find a course, connect with a PGA of Canada professional or learn more about junior golf programs in their community.

Sharing golf’s story means celebrating the health, social, economic, competitive and charitable benefits of the game in Canada.  A snapshot of the Canadian golf landscape reveals an industry that is worth more than $14.3 billion annually to the Canadian economy, numbers that reinforce the massive financial, charitable, social, tourism and environmental impact golf has in communities across Canada.

In addition, Canadian golf facilities are a channel for major charitable giving with close to 37,000 events at Canadian courses helping to raise more than $533 million annually for worthwhile causes.

The Golf Canada Golf campaign was developed and executed in partnership with BrandFire Marketing Group, a full-service agency based in Toronto that in 2014 was named among Profit 500’s Fastest Growing Companies in Canada.

The campaign will extend throughout the 2015 season, inviting golfers and sport enthusiasts to share and celebrate the many stories that make the game of golf special in Canada.