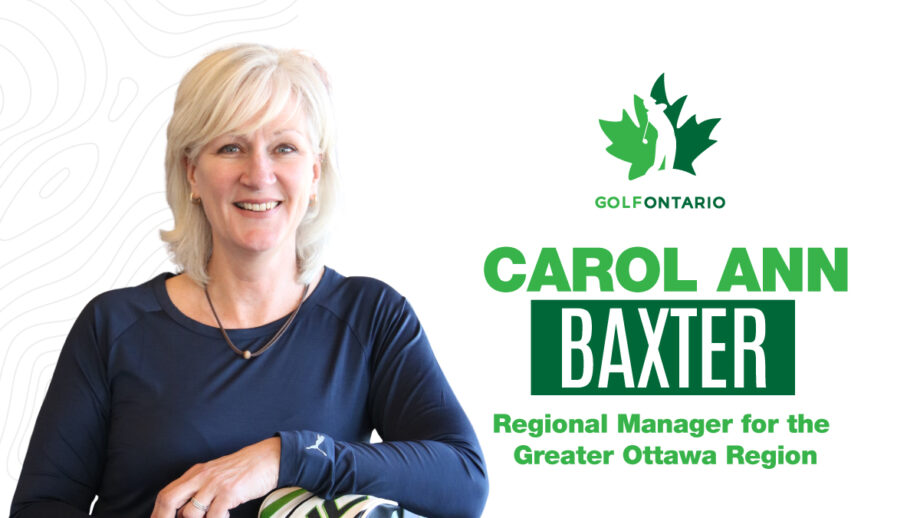 As the Regional Support Strategy expands to Eastern Ontario Golf Ontario is proud to announce Carol Ann Baxter as Regional Manager for the Greater Ottawa Region. Carol Ann joins Golf Ontario on June 6, 2022, as we expand our reach across the province in the delivery of our Regional Support Strategy. A facility owner (Archie’s Family Golf Centre) in the region, Carol Ann understands the challenges and needs of operators intimately. She will be able to leverage the many relationships she has built over the years in the Greater Ottawa Region to ensure the successful introduction of the RSS with facilities and stakeholders in the region.

“We are thrilled to welcome Carol Ann to the team. I look forward to the launch of the Regional Support Strategy in the Greater Ottawa Region under her leadership,” exclaimed Kyle McFarlane, Senior Director, Golf Operations. “The RSS is about building relationships between facilities, associations and stakeholders and I’m extremely confident that Carol Ann brings the experience and skillset to make that happen.”

As a PGA and LPGA golf professional Carol Ann brings a wealth of industry experience. She formally served as the  Regional Director for Eastern Ontario-Outaouais Chapter with the National Golf Course Owners Association and currently holds the role of Executive Director of the PGA of Canada – Ottawa Zone.

“To have the opportunity to facilitate the development and delivery of Golf Ontario’s Regional Support Strategy is an honour,” added Baxter. “My life and life’s work have revolved around golf on so many different levels and I am truly passionate about the game and the business. This platform will allow me to advance Golf Ontario programs and initiatives designed to support the growth and sustainability of golf in the Region and those responsible for delivering them.”

OAKVILLE, Ont. (Golf Canada) – The world’s top 18-and-under female junior golfers will head to Ottawa for the fourth edition of the World Junior Girls Championship from Sept. 26-29 at The Marshes Golf Club. As host nation, Canada will send two teams of three athletes to compete for the international title of World Junior Girls champion.

“It is an honour to host this prestigious event and we look forward to welcoming these players to Canada,” said tournament director Mary Beth McKenna. “The course is in fantastic shape and we are thrilled to host some of the world’s best juniors at this historic club. Our partners at The Marshes Golf Club and the communities in the surrounding area have come together to make this a truly memorable event for our competitors.”

Representing Canada One will be Monet Chun (Richmond Hill, Ont.), Céleste Dao (Notre-Dame Ile Perrot, Que.) and Ellie Szeryk (London, Ont.), who are three of Canada’s top-ranked junior golfers at No. 375, 453 and 597, respectively, on the World Amateur Golf Rankings (WAGR).

The 16-year-old Chun is experiencing her first year as a member of Team Canada’s Development Squad and second year representing Canada at the World Junior Girls. So far in 2017, she has wins at both the Future Links, driven by Acura Ontario Championship and the Ontario Junior Spring Classic, which put her in second on the Junior Girls Order of Merit – the same spot she finished at last year.

Szeryk, sister of Canada’s top-ranked amateur female golfer Maddie, has two victories in 2017 so far including six top-five finishes. She currently sits in fourth in the Junior Girls Order of Merit and made it to the round of 32 at the 2017 U.S. Junior Girls Championship after earning gold medallist honours at the qualifying tournament in Garland, Texas.

DiMarcantonio, 14, won her second event of the season at the MJT – Spring Invitational and has six top-five finishes this year. She is currently enjoying her best season on the junior circuit and sits sixth on the Junior Girls Order of Merit.

Han has three wins in 2017 including earning gold medallist honours at the U.S. Junior Girls Qualifier in Kent, Wa., where she went on to finish in the round of 64. Her only wins of her junior career came this year and she is in eighth in the Junior Girls Order of Merit. Han represented Canada previously at the 2015 World Junior Girls Championship, also hosted at The Marshes.

Zhu is the youngest of all Canadian team members at the age of 13. She has seven top-five finishes this year and competed in the Canadian Women’s Amateur Championship where she finished T66. Her last win came in 2016 at the MJT – PGA of Ontario Junior Championship and she currently sits in ninth in the Junior Girls Order of Merit.

“Golf Ontario is excited to once again partner with Golf Canada to conduct this global championship at another of Ontario’s storied clubs – The Marshes Golf Club,” said Mike Kelly, Golf Ontario executive director. “We thank their membership and volunteer committees for all their hard work. We are thrilled for our athletes from Ontario who have been selected to represent Canada and wish them the best of luck.”

“These six athletes have had tremendous seasons and their selections to Team Canada are the result of their hard work and commitment to the sport,” said Jeff Thompson, Golf Canada’s chief sport officer. “The joint efforts of Provincial Golf Associations, home clubs, parents and athletes have made this accomplishment possible and they should all be proud to have earned their selections.”

In addition to the 72-hole team and individual competitions, the World Junior Girls Championship will be a celebration of the sport with a specific focus on the development and promotion of junior girls golf. The days leading up to tournament play will see a PGA of Canada coaching summit as well as a free junior girls skills clinic.

Opening ceremonies for the championship take place on Sept. 25 followed by the first round on Tuesday, Sept. 26. The tournament’s closing ceremonies will immediately follow the conclusion of play on Friday, Sept. 29.

Admission to the competition is free. Additional information regarding the fourth annual World Junior Girls Championship can be found on the competition’s website.

The World Junior Girls Golf Championship is an annual event conducted by Golf Canada in partnership with Golf Ontario. The international competition features three-player teams of 18-and-under athletes. As host country, Canada will field two of the tournament’s 20 teams competing over 72 holes for both individual and team honours. The event receives funding and support from the Ontario Ministry of Tourism, Culture and Sport; Ottawa Tourism; the Golf Canada Foundation (Women’s Golf Fund); Sport Canada; the R&A; the International Golf Federation; the PGA of Canada; and Levelwear. Admission and parking for the World Junior Girls Golf Championship is free. For more information, visit www.worldjuniorgirls.com.