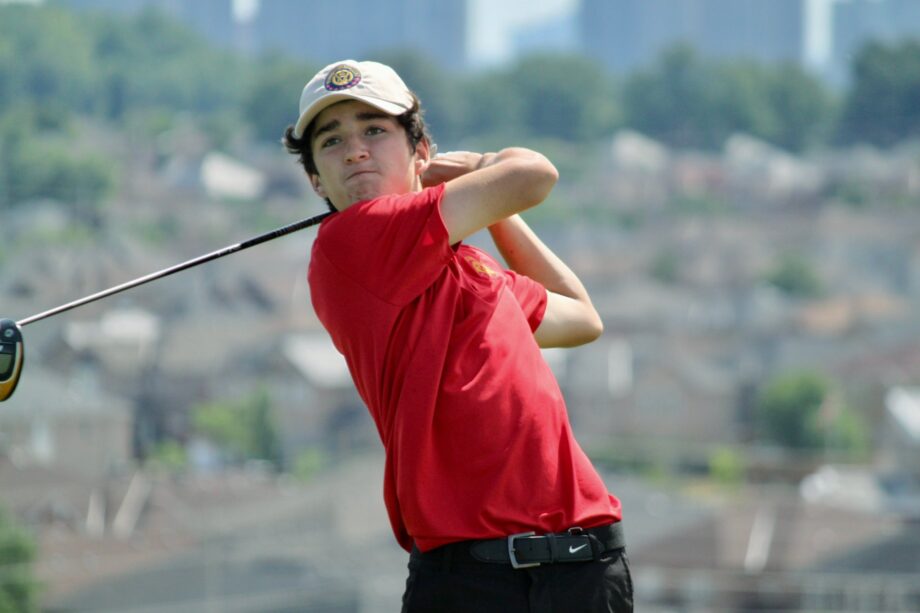 Competitors gave Braeben Golf Course their best effort for three days at the Ontario Summer Games in Mississauga in the hopes of topping the leaderboard.

Hamilton Halton Junior Golf Tour claimed the gold medal for the boy’s team event over three fun yet gruelling days of competition. Ethan Irvine led the team to a narrow victory after battling with the competition all weekend.

In the girl’s team event, Jamieson Junior Golf tour took a comfortable lead on the final day to ensure their place at the top of the podium. Emily Young of Kingsville Golf and Country Club paved the way to a gold medal for her team.

On the boys’ side, Hamilton Halton Junior Golf Tour saw a fantastic performance from Ethan Irvine, shooting a 65 (-7) on the final day to claim the team’s spot on the podium for his team.

Irvine shot well enough to secure him the gold medal in the individual boy’s competition. Irvine was followed by Ben Sheridan of Ottawa Valley Golf Association in the silver medal position and Christian Morneau of the Jamieson Junior Golf Tour for third.

The girls had a tight race all weekend, but Emily Young topped the rest of the playing field and won the gold medal in the girls’ individual stroke play after a great weekend shooting 81-79-79. Avery Nordman of Ottawa Valley Golf Association followed behind to claim the silver medal. Vanessa Ardovini from Jamieson Junior Golf Tour took the bronze medal.

Congratulations to all players on a great weekend and thank you to the games and Braeben Golf Course for your hospitality. For final standings and scores, check out the leaderboard here.

About the Ontario Summer Games

Highlights from the 2016 Ontario Juvenile Boys’ and Girls’ Championships contested as part of the Mississauga Ontario Summer Games Aug. 10-12 from BraeBen Golf Club.

MISSISSAUGA — Golf at the 2016 Mississauga Ontario Summer Games came to a close on Aug. 12, from BraeBen Golf Course, with Stoney Creek’s Johnny Travale and Port Credit’s Chloe Currie standing atop the podium. Travale came in with a lead and never relinquished it, carding a two-over (74) final round. Currie came from behind to win thanks to a four-under (68) during the day.

Travale, from the Hamilton Golf & Country Club, entered the day at 10-under for the tournament, with a four-shot lead. The 15-year-old didn’t let his competitors back into it on the front nine as he was even par heading to the turn. On the back nine he would settle for three bogeys, but added a birdie to finish two-over, which was good enough for the win. Travale ended the championship at eight-under (68-66-74-208).

“It feels good to win this. A lot of hard work has gone into my game, especially after having a little upset at the U.S. Junior,” said Travale.

Travale also talked about what the keys to his win were. “My ball striking and putting were the strongest parts of my game this week. Nothing was really going wrong. The final round got tough in the wind but I’m sure it was tough for everyone. I knew I had to put up a good number today because Peyton (Callens) or Mike (von Schalburg) were going to give me a run for my money.”

Earning the silver was Langton’s Peyton Callens. Callens, from Delhi Golf & Country Club and Team Ontario, began the day five-under and that is where he finished thanks to an even par final round (70-69-72-211).

Rounding out the podium with the bronze was King City’s Michael von Schalburg. The York Downs Golf & Country Club member had a tough front nine but settled down on the back nine to end the day three-over (75). That helped him finish the event at three-under (68-70-75-213).

In the girls’ championship, Currie, from the Mississaugua Golf & Country Club, started the day two shots off the lead. The 16-year-old quickly made up that ground thanks to a solid three-under front nine. She continued her strong play on the back nine finishing it at one-under to end the day four-under (68). That moved her tournament total to seven-under (68-73-68-209), earning her a four-shot win.

Currie went on to talk about her strengths during the tournament. “My ball striking and putting were solid all week. I got myself out of trouble a couple of times but I found the most challenging part of the week was the wind. But I knew that if I stuck to my game plan, things would turn out the way I wanted.”

Taking the silver was Richmond Hill’s Monet Chun. Chun, from the Summit Golf & Country Club and Team Ontario, was the leader as the final round got underway. However, she would give it up with a two-over front nine. While she did play the back nine even, she was unable to make up the ground on Currie. Chun finished the day two-over (74) to bring her tournament total to three-under (74-65-74-213).

Picking up the bronze was Maple’s Alyssa DiMarcantonio. DiMarcantonio, from Station Creek Golf Club and Team Ontario, started the final round at five-over. However, the 13-year-old had the second best round of the day, next to Currie, finishing at three-under (69). That moved her to two-over (80-69-69-218) and helped her earn the medal.

In addition to the medals for individual play, medals were awarded to the top three teams representing different regions across the province. For the team competition, the lowest two boys and lowest girl’s score from the first two rounds were counted. Capturing the gold medal was Team York (Zack Mason, Eric Byun and Vaijayanti Bharkhada) at 455. The silver medal was won by Team Ottawa (Cameron Belanger, Ethan Johnston and Karianne Lefebvre) at 479. Team Essex-Kent (Shawn Sehra, Luc Warnock and Brooke MacKinnon) was awarded the bronze at 482.

For more information, including the final leaderboards, see the tournament sites at: https://gao.bluegolf.com/bluegolf/gao16/event/gao164/index.htmfor the boys’ championship and https://gao.bluegolf.com/bluegolf/gao16/event/gao166/index.htmfor the girls’ championship. For more information on the Ontario Summer Games, visit: https://www.osgmississauga.ca.

The golf competition at the 2014 Ontario Summer Games, Presented by the Sport Alliance of Ontario and Ministry of Tourism, Culture and Sport, Aug. 8-10 at the Roseland Golf & Curling Club in Windsor, ON. The golf championship was the Golf Association of Ontario’s Juvenile (U17) Boys’ and Girls’ Championships. The winners were Gavin MacIver and Madeline Marck-Sherk.

WINDSOR— The Golf Association of Ontario’s (GAO) Juvenile (U17) Boys’ Championship, held in conjunction with the Ontario Summer Games, wrapped up on Aug. 10 with the final round of play. After many lead changes and names atop the leaderboard, it was Scarborough’s Gavin MacIver who took the title in the end with a final round of one-under (69) to bring his tournament total to three-over.

The 16-year-old Cherry Downs Golf & Country Club member entered the final round in a tie for third at four-over. But after round-two leader, Niagara Falls’ Jaret Chipman, faltered during the day, MacIver was able to take advantage.

“The final round started off ok,” said MacIver. “The leader (Chipman) was playing well. Then we got to the back nine and I had the lead. I soon found out that Jake (Bryson), in the second last group, was one up on me. Things really turned around on 11 and 12 when I birdied them and got the outright lead. I just brought it home from there.”

MacIver put a string of three birdies on four holes together on the ninth, 11th and 12th holes to help galvanize his round. In the process, he was also able to move ahead of Dunrobin’s Jake Bryson who also held the lead during the round.

“I was rolling in a lot of putts. I made a 20 footer on 12 downhill, which really got things going, from there I just tried to par the rest of the holes,” said MacIver.

It was that putting along with his play off the tees that MacIver attributed his success to. “My putting and shots from the tee were the strongest parts of my game this week. I gave myself good birdie chances all week. Today, I made all my short putts and drained a couple long ones that got my game going.”

Bryson, a member of the GAO’s Ottawa Regional Team, finished the day at even par (70) and was four-over for the tournament, earning the silver medal.

Rounding out the podium was Waterloo Regional Team and Greenhills Golf Club member Jackson Bowery. Bowery, the London resident, shot a three-over (73) and ended the tournament three shots back at six-over.

For the final leaderboard see the tournament site at: http://gao.bluegolf.com/bluegolf/gao14/event/gao1422/index.htm

The Ontario Juvenile Boys’ Championship is a 54-hole competition that features the province’s best junior golfers under the age of 17 competing for the Mike Weir trophy. This year the event is contested as part of the 2014 Ontario Summer Games.

WINDSOR— The Golf Association of Ontario’s (GAO) Juvenile (U17) Girls’ Championship, held in conjunction with the Ontario Summer Games, came to an end on Aug. 10 at the Roseland Golf & Curling Club in Windsor. When the final putt was drained, it was Ridgeway’s Madeline Marck-Sherk who walked away with the Juvenile Girls’ trophy and the Ontario Summer Games’ gold medal.

Marck-Sherk, 16-years-old from the Bridgeway Country Club and the GAO’s Waterloo Regional Team, got out to a great start during the round with birdies on the first and third holes. She would add an eagle on the 14th and finished the day two-under (70) to end the tournament at even par.

“It was a big week for me. I was able to drain some putts today and with a score of 70, I can’t have any complaints. It was such a great tournament and I am just so happy to have won this,” said Marck-Sherk.

After the round, Marck-Sherk credited her performance to her strong putting. “The early putts helped a lot, I was able to keep the momentum going and continue strong throughout the round. Coming into the tournament I knew there was a chance for me to win and making it to the final group, I knew there was a possibility.”

Finishing second was Ottawa’s Grace St-Germain. The Team Ontario and Hylands Golf Club member finished the day one-over (73) to end the tournament at five-over. Marck-Sherk spoke about what playing in the final group with the 2014 Canadian Junior Girls’ and Quebec Women’s Amateur champion was like. “It was tough, I knew she would be tough competition. We are good friends and I was honoured to play with her. She played well today, the nerves were there for me, but I was able to overcome them.”

Picking up the bronze medal was London resident and London Hunt and Country Club member Isabella Portokalis. Portokalis, a Waterloo Regional Team member, finished the day one-over (73) and ended the tournament at eight-over.

For the final leaderboard, visit the tournament site at: http://gao.bluegolf.com/bluegolf/gao14/event/gao1423/index.htm

The Ontario Juvenile Girls’ Championship features the province’s best junior golfers under the age of 17 competing for the Sandra Post trophy. Past champions of the event include Post, Jessica Shepley, Alena Sharp, Stephanie Sherlock, and Rebecca Lee-Bentham. This year the event was contested as part of the 2014 Ontario Summer Games.