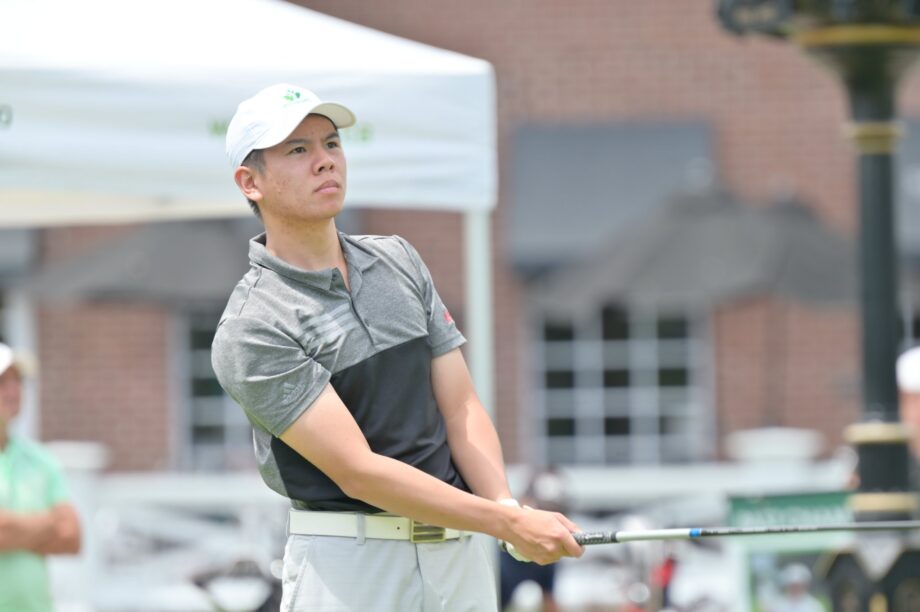 Scarborough – What started as a warm, windy and beautiful day at the Scarboro Golf & Country Club saw a brief rain delay before completing day one of the 2022 Ontario Men’s Amateur Championship.

The rain delay only lasted 30 minutes, allowing the golfers to get back on the course and wrap up the first round of play. To end round one, Jeff Fang (Players Club – Markham) finished top of the table with a 3-under (68). Behind Fang, with a score of minus-two (69), Aidan Gavey (Beverly Golf & Country Club) holds the second overall spot. Bennett Ruby (Westmount Golf & Country Club), Jeffrey Clarke (Glencairn Golf Club), Zachary Smith (Brampton Golf Club Ltd), and Justin Allen (Weston Golf & Country Club Ltd) all sit tied in third with a score of minus-one (70).

The men will start round two tomorrow morning at 8 am and will tee off on holes one and eight. For media coverage of the Ontario Men’s Amateur Championship, please visit the Golf Ontario Facebook page to view our photo albums. To follow along with the leaderboard, visit our Golf Genius page.

WINDSOR— In what can only be described as a phenomenal final round, 16-year-old Sudarshan Yellamaraju captured the Investors Group Ontario Men’s Amateur Championship at Ambassador Golf Club on July 14.

Yellamaraju, from Mississauga and Blue Springs Golf Club, entered the day one shot off the pace at seven-under for the tournament. Despite being one of the youngest in the field, Yellamaraju was dialed in early during the final round. After a birdie on the third hole, he proceeded to drain three in a row from six to eight and made the turn at four-under. He would not let up on the back nine. He birdied both 10 and 12, stretching the lead to five strokes. While he did run into trouble with bogeys on 14, 15 and 17, he drained a clutch birdie putt on the 18th, which earned him the win. He went on to finish the round four-under (67) and finished the tournament 11-under (69-68-69-67-273).

Yellamaraju spoke about what the win meant to him, especially after he came up just short last week at the Ontario Junior Boys’ Championship. “I am feeling great right now considering what happened last week at the Ontario Junior. I felt I bounced back well this week and played pretty well. This course provided a good challenge and I am glad I got the victory in the end.”

At just 16, Yellamaraju sees the win as a big stepping-stone in his development. “I definitely think this is a big accomplishment and a great way for me to take the next step in my golf career. To win at my age is very special to me.”

As for his strength during the week, Yellamaraju pointed to his putting. “I felt like the strongest part of my game was my putting. Every time I had five or six footers to make par, I made them. This week I felt very confident putting within 10 feet and it got me to where I finished.”

The silver medal went to Stouffville’s Gajan Sivabalasingham. Sivabalasingham, from Meadowbrook Golf & Country Club, went low during the final round finishing the day five-under (66). Sivabalasingham ended the tournament at 10-under (68-67-73-66-274).

Picking up the bronze was last year’s champion, Unionville’s Max Sear. Sear, from York Downs Golf & Country Club, also had a strong round ending the day three-under (68). That moved him to nine-under (67-67-73-68-275) for the championship.

Yellamaraju, Sivabalasingham and Sear all earned the right to represent Ontario in the inter-provincial competition at the Canadian Men’s Amateur Championship, at the Toronto Golf Club and Islington Golf Club, Aug. 7-10.

For full tournament information, including the final leaderboard, see the tournament site at: https://gao.bluegolf.com/bluegolf/gao17/event/gao172/index.htm

Golf Ontario would like to thank Ambassador Golf Club, their staff and volunteers for hosting the event. Thanks also to the Golf Ontario volunteers and to title sponsor Investors Group for their continued support of golf in the province.