OTTAWA — A well-accomplished field of competitors will take to The Marshes Golf Club from Sept. 24-29 for the fourth annual World Junior Girls Championship. In total, 60 athletes will represent 19 countries – including two teams from host nation Canada.

“With our partners, we are proud to offer a world-class event for girls of this age group, where there are fewer opportunities for international competitions,” said tournament director Mary Beth McKenna. “These girls are some of the best juniors in the world and we are thrilled to host them in a tournament where they can continue their growth and development.”

This year’s field is highlighted by 11 competitors ranked inside the World Golf Amateur Rankings (WAGR) top 100. Among them are the tournament’s top two ranked players from Sweden: Amanda Linnér (No. 18) and Beatrice Wallin (No. 38). The pair will be joined by teammate Linn Grant (No. 84) — who was a member of the silver (2014) and bronze (2015) World Junior Girls Championship team medal winners. Both Linnér and Grant will make their second appearances at the championship.

The 2017 installment of the event will see numerous players return as 18 members of the field have played in at least one World Junior Girls Championship, including both the 2016 silver medallist Jennifer Chang (USA) and bronze medallist Caterina Don (Italy), who look to become the first repeat medallists in tournament history.

While the Italian team does boast the defending individual bronze medallist, it could be another member who steals the show. Alessia Nobilio, who participated in the 2016 World Junior Girls Championship, comes into the tournament as the third-highest ranked player at No. 41 after a 2017 season that saw her win the International Juniors of Belgium and France International – Cecile de Rothschild Trophy. In addition, she and teammate Caterina Don (No. 127), won the Italian U18 Team Championship. Don also picked up individual honours with a win at the Italian Girls U18 National Championship. The two World Junior Girls Championship veterans will be joined by newcomer Alessandra Fanali, who currently ranks 112th in the WAGR.

In 2016, the Philippines captured the title by a nine-stroke margin on the strength of gold medallist Yuka Saso, who was the lone player to finish the tournament under par. This year, the defending champions will be paced by Harmie Nicole Constantino (No. 305), who won the Philippine Amateur Open. She will be joined by teammates Junia Louise Gabasa and Kristine Torrabla.

With all of the returning teams and players, the World Junior Girls Championship is also pleased to welcome two teams that will be making their debut in 2017, Chinese Taipei and Switzerland. Chinese Taipei will send Kuan-Yu Lin (No. 1096), Hui-Wen Chiu (No. 943) and Jo-Hua Hung (No. 379). The Swiss will feature Victoria Monod (No. 612), Elena Moosmann (No. 85) and Chiara Tamburlini (No. 376).

Admission to the competition is free. Additional information regarding the fourth annual World Junior Girls Championship can be found on the competition’s website.

The World Junior Girls Golf Championship is an annual event conducted by Golf Canada in partnership with Golf Ontario. The international competition features three-player teams of 18-and-under athletes. As host country, Canada will field two of the tournament’s 20 teams competing over 72 holes for both individual and team honours. The event receives funding and support from the Ontario Ministry of Tourism, Culture and Sport; Ottawa Tourism; the Golf Canada Foundation (Women’s Golf Fund); Sport Canada; the R&A; the International Golf Federation; the PGA of Canada; and Levelwear. Admission and parking for the World Junior Girls Golf Championship is free. For more information, visit www.worldjuniorgirls.com. 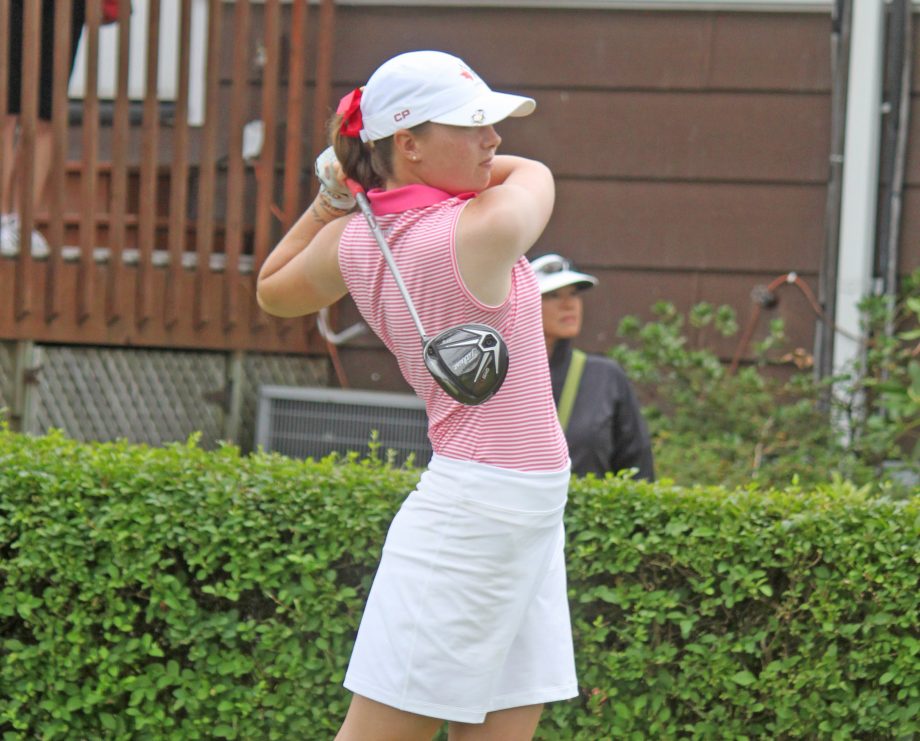 OTTAWA (Golf Canada) – The world’s top female junior golfers will gather in Ottawa for the second playing of the World Junior Girls Championship from September 20-25 at The Marshes Golf Club. Six Canadians will represent the host nation in team and individual competition as Canada vies for the title of World Junior Girls champion.

“The Marshes Golf Club is in great shape and we are excited to once again bring the world’s talented players to Canada,” said Tournament Director Mary Beth McKenna. “It is a true honour to be selected to represent your country and we know that all the athletes from across the globe will want to perform their best in this event.”

Grace St-Germain of Orleans, Ont., will return to the competition looking to improve upon Team Canada’s third-place result in 2014. The national team Development Squad member has had a banner year in 2015. St-Germain tallied a third-place result at the Golf Quebec Junior Spring Open before beginning Golf Canada’s championship season with a victory at the CN Future Links Pacific Championship. The 17-year-old repeated as the Golf Association of Ontario’s Junior Girls’ Match Play champion and closed the campaign with victories at the Canadian Junior Golf Association (CJGA) Mizuno National Junior Golf Championship and the Graham Cooke Junior Invitational – it was her third consecutive victory at the tournament named after the Canadian Golf Hall of Famer.

Playing alongside St-Germain is Hannah Lee of Surrey, B.C. The 15-year-old has demonstrated a great deal of consistency this summer, finishing runner-up at the British Columbia Juvenile Championships, third at the B.C. Junior Girls and T7 at the B.C. Women’s Amateur. She captured the 16-and-under Juvenile Division at the 2015 Canadian Junior Girls Championship and finished second overall in the national championship. The lessons she learned this summer culminated in Lee claiming the gold medal in the girls’ competition at the 2015 Western Canada Summer Games in Wood Buffalo, Alta.

Rounding-out the Team One contingent is 14-year-old Tiffany Kong. The Vancouver native’s second-place standing at the Maple Leaf Junior Golf Tour (MJT) Season Opener began a string of six events where she finished no lower than a tie for sixth-place. Kong finished fourth at the B.C. Junior Girls before capturing the silver medal in the individual competition at the Western Canada Summer Games. The highlight of Kong’s season would come at The Vancouver Golf Club in Coquitlam, B.C., where she competed in the 2015 Canadian Pacific Women’s Open after earning a spot through the Monday Qualifier.

Alisha Lau will play in the World Junior Girls Championship for a second time. The product of Richmond, B.C., emerged victorious at the 2015 CN Future Links Prairie Championship at Cooke Municipal Golf Course in Prince Albert, Sask., and finished tied for third at the B.C. Women’s Amateur Championship. Lau claimed the bronze medal at the Western Canada Summer Games to complete a sweep of the podium for Team B.C. The trio of Lee, Kong and Lau’s combined score of 435 over two rounds earned them gold in the team competition – 58 strokes clear of second-place.

“These six athletes have been selected to represent Canada based on some fantastic results achieved throughout the season,” said Jeff Thompson, Golf Canada’s Chief Sport Officer. “The growth that these players have shown this year is a direct result of the support they have received from their home clubs, their skilled coaches and the provincial golf associations.”

Thompson credited the strength of competition in Canada as being a key component in the development of these players.

“The performances of Canada’s junior female athletes have been very strong this year. While that level of competition has made this selection process far from simple, it has provided excellent opportunities for the players to hone their skills against Canada’s best. The wealth of resources available to our athletes, beginning at the grassroots level and extending to the provincial and national levels, has resulted in a tremendous amount of golfing talent across the nation. We look forward to seeing this group proudly represent all of Canada as they learn and grow on the international stage.”

National team Development Squad women’s coach Ann Carroll will return to lead the Canadian teams in the competition. Assisting her will be Mike Martz, coach of the New Competitors team at the Golf Performance Centre at Whistle Bear.

Conducted by Golf Canada in partnership with the Golf Association of Ontario and supported by the International Golf Federation, the 2015 edition of the World Junior Girls Championship will take place in Ontario for a second consecutive year. The inaugural tournament in 2014 was held at Angus Glen Golf Club in Markham, Ont., where Team USA claimed team honours and Beverly Hills, Calif., native Mika Liu finished atop the leaderboard in individual competition.

In addition to the 72-hole team and individual competitions, the World Junior Girls Championship will be a celebration of the sport with a specific focus on the growth and development of the game. Golf Canada will host a Canadian Sport Institute Ontario (CSIO) coaching summit and a girls’ skill development clinic in the lead-up to the tournament.

Additional information regarding the 2015 World Junior Girls Championship can be found on the competition’s website: http://www.worldjuniorgirls.com.

OTTAWA (Golf Canada) – The 2015 edition of the World Junior Girls Championship will be held at The Marshes Golf Club in Ottawa from September 20-25. In addition to showcasing a number of the world’s most talented 18-and-under female golfers, the event will focus on the continued development of the sport.

“The World Junior Girls Championship is about more than this year’s participants and their opportunity to learn through international competition,” said Jeff Thompson, Chief Sport Officer of Golf Canada. “It is also about the sustainable development of golf in Canada and strengthening the relationship between the national golf associations around the world.”

Mike Kelly, Interim Executive Director of the Golf Association of Ontario, mirrored Thompson’s sentiments. “The chance to gather a number of elite coaching minds from around the world to share their knowledge and experiences is an invaluable opportunity. Through the junior girls skills development clinic and the junior-amateur fundraiser, we hope to leave a lasting imprint on the golfing community in the Ottawa area.”

A junior girls skills development clinic will be conducted with PGA of Canada coaches introducing and developing golf-specific skills with junior golfers invited from the community. The junior-amateur fundraiser will see World Junior Girls Championship competitors play with local golfing enthusiasts to raise funds towards the development of golf in Ontario.