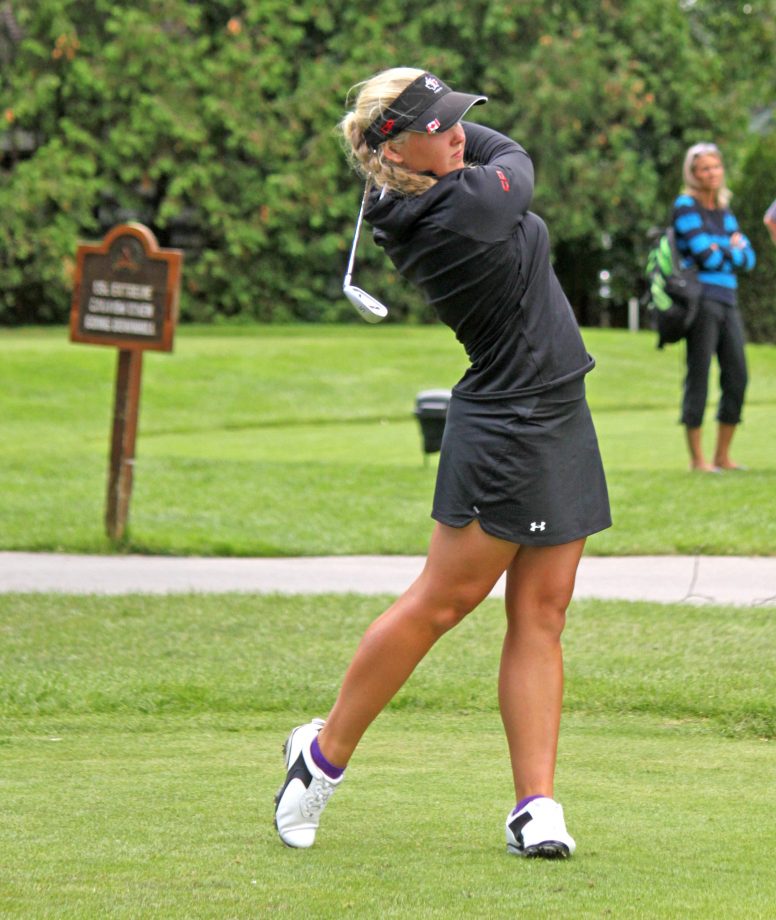 BRAMPTON— It seems like not much has changed between round two and three as Smiths Falls’ Brooke Henderson is still leading at the Golf Association of Ontario’s (GAO) Investors Group Women’s Amateur Championship, at the Brampton Golf Club. However, it was not so routine, as Bath’s Augusta James looked to take the lead into the final day up until a triple bogey on the 18th hole.

Henderson came into the day with a one-shot lead over James at six-under for the tournament. However, the 16-year-old, Team Canada member bogeyed two of the first three holes allowing fellow Team Canada member, James, to move in front.

James would play the front nine two-under and found herself in a tie with Henderson heading to the back nine. With three more birdies on the first six holes of the back nine, James was at 10-under, three shots ahead of Henderson. However, things went south for James with three holes to play. After a bogey on the 16th hole, she found the tall grass on 18. That led to a triple bogey and she ended the round at one-under (70).

As for Henderson, she birdied the 17th hole and pared 18, creating a two-shot swing to head into the final round at eight-under, two shots ahead of James. Henderson finished the third day at two-under (69).

Rounding out the top three was Mono’s Brittany Marchand. Marchand was in the final group with her Team Canada teammates. She played the front nine at even par before a birdie on 17 dropped her to one-under for the day (70) and the tournament.

Big movers on the day were a pair of players in the second last group, Newmarket’s Delaney Howson and Thornhill’s Elizabeth Tong. Both players had the low round of the day at three-under (68), bringing Tong to two-over and Howson to four-over for the tournament.  They will make up the second last group along with Markham’s Vivian Tsui who sits at six-over for the tournament.

The final round of competition gets under way at 7:30 a.m. on Friday, with the final group schedule to tee off at 10:20 a.m.  For full tournament info and final round pairings visit the tournament site at: http://gao.bluegolf.com/bluegolf/gao14/event/gao1416/index.htm 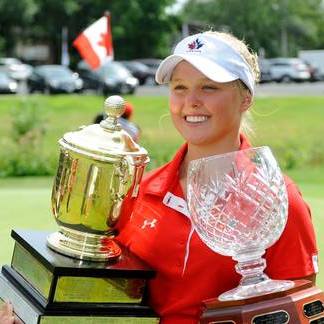 UXBRIDGE, ON— The best female golfers in Ontario will be teeing it up next week, July 8-11, at the Brampton Golf Club for the Golf Association of Ontario’s (GAO) 2014 Investors Group Women’s Amateur Championship.

The first two rounds of the 99th edition of the tournament, which was also played at Brampton in 1985, will see the field of 87 cut down to 54, plus ties for the final two rounds.

The field will have numerous big names taking part, including 16-year-old Smiths Falls native and Canadian National Team member Brooke Henderson. Henderson is coming off a T-10 at the Women’s U.S. Open, June 22, where she also was the low amateur. In addition, Henderson won the Canadian Women’s Tour Ontario event just days later on June 25.

Henderson’s first and second round group will include the two most recent champions as she will play along side Seaforth’s Robyn Doig, the 2013 champion who is coming off of a win at the Match Play Championship earlier this season, and fellow Team Canada member Mono’s Brittany Marchand, the 2012 winner.

Five-time champion, Mary Ann Hayward, from Aurora, will also be part of the field, as will 2011 champion and current Team Canada member Bath’s Augusta James and 2004 champion Etobicoke’s Terrill Samuel.

The field also features two members of the GAO’s Team Ontario with Oakville’s Annika Haynes and Richmond Hill’s Monet Chun taking part. At 13-years-old, Chun is one of the youngest competitors only older than 12-year-old Isabella Portokalis from London.

Portokalis is part of the GAO’s Team Waterloo U17 regional team. In addition to her participation, four other regional team members will compete. Joining her from Team Waterloo is Ridgeway’s Madeline Marck-Sherk, from Team York are Thornhill’s Ellice Hong and Hornby’s Alexandra Naumovski, and Lilian Klekner-Alt is the lone representative from Team Ottawa.

Marchand and Naumovski are part of the local contingent in the field from the Brampton Golf Club that also includes: Sandy Byckowski, Meredith Fairbairn, Kayrn Lee Ping, Katelyn McMahon and Melissa Ramnauth.

First round tee offs will begin on July 8 at 7:30 a.m. To stay up to date on the entire tournament visit the tournament site at: http://gao.bluegolf.com/bluegolf/gao14/event/gao1416/index.htm

About the Women’s Amateur