UXBRIDGE/WATERLOO — The first 2016 Golf Ontario junior event came to a close on May 23, as the Investors Group Junior Boys’ and Girls’ Spring Classics wrapped up after three days of great golf. In the end, Peyton Callens and Ellie Szeryk outlasted the competition at Wooden Sticks Golf Club and Grey Silo Golf Course, respectively, to hoist the championship trophies.

Entering the day, Langton’s Peyton Callens had a two-shot lead. The Delhi Golf & Country Club member had played some consistent golf throughout the weekend and the final round would be no different. Back-to-back birdies on the fourth and fifth holes helped him finish the front nine at one-under. That would be key for the Team Ontario member as he was one-over on the back nine. Still, the 16-year-old’s even-par (72) was good enough to hold off the field as he capped off the week at four-under (71-69-72-212) earning the championship. Callens also took home the Juvenile title.

The consistent play definitely turned out to be the key factor as one player, Elmvale’s Andrew Nagel, from Barrie Country Club, was on fire. Nagel carded a six-under (66) to put the pressure on Callens. While his run would fall just short, Nagel picked up the silver at two-under for the tournament (77-71-66-214).

After the round, Callens spoke about the pressure he faced from his challengers. “Coming into today I was up by two on John (Burghardt) and didn’t quite know how he would play. It turned out that he ran into some trouble, but meanwhile Andrew (Nagel) was just hitting everything. He was three-under at one point while I was two-under so I knew I just had to keep playing my best. My lead was only three shots at one point and in golf a three-shot lead is really nothing. I started to put some distance on the back nine and that’s when I started to feel good. I knew if I just stayed calm, played well, hit good shots, hit fairways and greens I would be able to pull it out.”

For full tournament information, including the final leaderboard see the tournament site at: https://gao.bluegolf.com/bluegolf/gao16/event/gao162/index.htm

The final round for the girls at Grey Silo looked like it would be anything but dramatic. Port Credit’s Chloe Currie entered the day at three-under and had a five-shot lead. However, the Team Canada Development Squad and Mississaugua Golf & Country Club member got out to a rough start. She double bogeyed the first hole and bogeyed the second bringing her right back to the rest of the field. Her struggles continued on the back nine and she went on to finish the day five-over (76), brining her three-day total to two-over (68-71-76-215) good enough for a share of second.

Meanwhile, one of her playing partners was having a solid outing. Ellie Szeryk, a dual United States and Canadian citizen who plays out of London when in Ontario, began the day at one-over in a tie for second. After an even front nine, she finished one-under on the back for a final round of one-under (70). That was good enough to secure her the title as she ended the three rounds at even par (69-74-70-213).

“It feels amazing to win. It was a grind out there today, Chloe (Currie) and Monet (Chun) were really close, at one point I think there were about four players all pretty close to one another so I am so happy I could finish it off and pull out a win,” said Szeryk.

Szeryk credited her ball striking as the key element of her game that helped her capture the win. “My ball striking was really good, I put myself in good places. Of course I had some bad shots but I learned to recover and got over whatever happened.”

The win was the first provincial championship for the 14-year-old Szeryk.

The silver medal was also shared by three Team Ontario players who, in addition to Currie, all finished at two-over for the tournament. Hornby’s Alexandra Naumovski, from Brampton Golf Club, had the low round of the day finishing three-under (68). First-round leader London’s Isabella Portokalis, from West Haven Golf & Country Club finished one-over (72) as did Richmond Hill’s Monet Chun, from The Summit Golf & Country Club.

Full information, including the final leaderboard can be found on the tournament site at: https://gao.bluegolf.com/bluegolf/gao16/event/gao1618/index.htm

Golf Ontario would like to thank both Wooden Sticks and Grey Silo along with their staffs for hosting the events. Thanks also to the Golf Ontario volunteers and to title sponsor Investors Group for their continued support of golf in Ontario.

About the Investors Group Spring Classic

The Investors Group Junior Spring Classic is a 54-hole stroke-play competition contested annually over the Victoria Day long weekend that features many of Ontario’s best male and female junior golfers. The field of competitors gained entry to the competition through a qualifying process earlier in the season.

UXBRIDGE/WATERLOO— The Golf Association of Ontario’s (GAO) Investors Group Junior Spring Classic wrapped up on May 18 after three days at Wooden Sticks Golf Course in Uxbridge and Grey Silo Golf Course in Waterloo. When all was said and done it was Max Sear who captured the boys’ title while Alyssa Getty took home the girls’ championship.

At the junior boys’ event, taking place May 16-18 at Wooden Sticks Golf Course, a tremendous final round by Golf Canada Development Squad member Trevor Ranton put the pressure on second-round leader, Team Ontario’s Sear. Waterloo’s Ranton carded a six-under (66) during the final round moving him to seven-under for the tournament (68-75-66-209). That meant Sear had to finish the round at two-under to force a playoff or better for the win. Unionville’s Sear was up to the task and finished two-under 70 (69-70-70-209) and forced the playoff.

During the playoff it was Sear, the York Downs Golf & Country Club member, who was able to pull out the win with a par on the first extra hole to win the Investors Group Junior Boys’ Spring Classic.

Ranton, the Whistle Bear Golf Club member, still had a strong showing this week. He followed up his win at the CN Future Links Pacific Championship last weekend with the Junior Spring Classic silver medal.

After his win Sear spoke about his tournament. “It felt good out there today,” said Sear. “I started off slow but got going on the back nine. I felt good all day. Trevor and I are good buddies and if I had to go up against someone, in a playoff, I’m glad it was him because we both enjoy the pressure. I wanted to see him do well but at the same time I also wanted to beat him. We both played well today, so it was a lot more fun for everybody.”

Completing the top three were London’s Jackson Bowery and Waterloo’s Tyler Douse who both finished even for the tournament. Bowery, the Team Ontario member from the Green Hills Golf Club finished 70-73-73 for a total of 216.  As for Douse, from Westmount Golf & Country Club, his tournament scores were 70-71-75 for a total of 216.

Capturing the Juvenile Division was Aurora’s Jack Simpson. Simpson, from the Beacon Hall Golf Club finished the tournament at five-over (74-68-79- 221). Thanks to his low second round, Simpson was able to build up a big lead and rode it right through the final round to win the Juvenile Championship.

Over at the junior girls’ event at Grey Silo Golf Course, for the third day in a row a new name topped the leaderboard but this was the round where it counted. Ruthven’s Alyssa Getty came into the round just one shot off the lead. After 18 holes, the Team Ontario and Kingsville Golf & Country Club member was two-over (73) for the day, bringing her tournament total to six-over (71-75-73-219) good enough for a one-shot victory.

The victory was extra sweet for Getty who fell just short last year. “I’m really excited that I played well this year and gave myself a chance to win. I am proud that I came out and got it done. I think my bad shots didn’t get me into a lot of trouble, so I stayed around even and kept it consistent. I was proud how I handled the pressure and happy overall with how I played.”

Taking the bronze medal, and making it an all-Team Ontario sweep of the medals, was Richmond Hill’s Monet Chun. Chun, the Summit Golf & Country Club member, led after round one and finished the day four-over 75, to end the tournament 10-over (69-79-75-223). 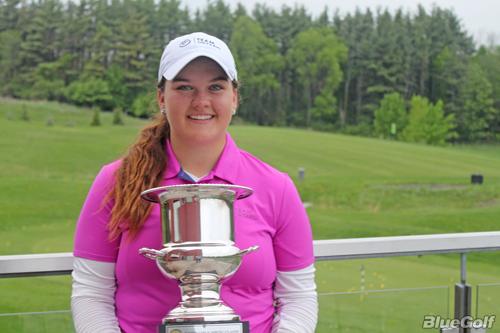 About the Investors Group Spring Classic

The Investors Group Junior Spring Classic Championship is a 54-hole stroke-play competition contested annually over the Victoria Day long weekend that features many of Ontario’s best male and female junior golfers. The field of competitors gained entry to the competition through a qualifying process earlier in the season. For more information and complete results see the tournament page at:

The GAO would like to thank the members, volunteers and staffs at both Wooden Sticks and Grey Silo for their support over the course of the weekend.