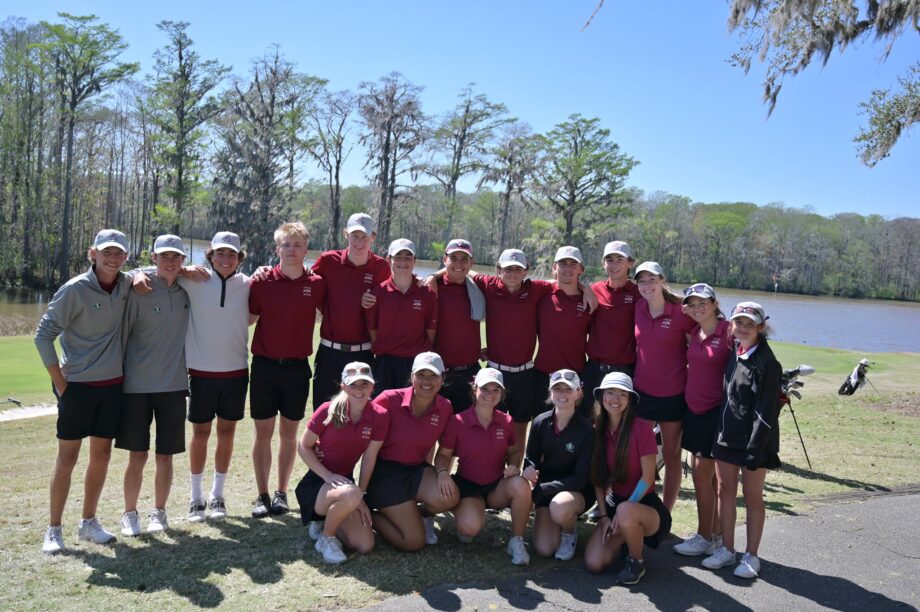 The Matches, held at the Wachesaw Plantation Club in Murrels Inlet, South Carolina, capped off two weeks of training for Team Ontario. Perfect temperatures greeted players on both days and set up some exceptional play despite some gusty periods.

Arriving March 4th, the Team had a great couple of weeks with plenty of practice and team-building, experiencing some of the best courses in Myrtle Beach. Team Ontario was fortunate to play Barefoot Golf Resort, Aero Club Short Course, The True Blue Golf Club, The Reserve Golf Club and Wachesaw Plantation Club. During that time, the Team worked on physical, mental, and technical training while also going through specific testing measures using tracking technology. Other activities during this trip included attending the General Hackler College Invitational from March 12th to 13th to watch NCAA Division 1 schools in action.

The Can-Am Junior Team festivities teed off Friday with the Junior Am event, dinner, and opening ceremonies welcoming the athletes to Wachesaw Plantation Club. The juniors played a round with members and event sponsors in a pro-am style. Following this, March 19th and 20th saw two days of competitive and challenging golf between the two sides in a quest to claim the historic and prestigious title.

Saturday, the Juniors competed in Four-Ball Match Play with a significant change to the format that made the event even more exciting and unique. The Four-Ball Matches were mixed partners meaning Girl/Boy from Ontario versus Girl/Boy from South Carolina. Sunday brought the return of the classic single matches.

Day one produced some rusty play at times, and although the juniors fought hard throughout the round, saw Team Ontario drop in overall points 17-7.

“Playing in these Matches’ format, things can change drastically very fast,” noted Head Coach Reggie Millage. “I thought our play was decent. It shows we are getting closer and how strong our athletes are. It is a big boost to play well coming out of our winter when you consider South Carolina is in the middle of their season and playing year round.”

The deficit proved too big a hill to climb by the end of day two despite some stellar efforts. Justin Mathews took all 3 points while Emma Hansen, Payton Constible, Ashley Lafontaine, Zach Smith and Ryan Somerville secured 2 ½ points each.

Millage was happy to be back at the event despite the loss. “It was great to be back at Wachesaw after the hiatus to a great venue as always. The kids got to see some great golf and get into a competition they don’t any other time in junior golf.”

Golf Ontario would like to thank all of the courses and their staff and members for hosting the Team. Thanks also to their SCJGA for their continued support of the matches.

In the 20 plus years, the Can-Am Junior Team Matches have seen over 125 South Carolina junior golfers who participated in these matches play competitive golf at the collegiate level. A select few of these youngsters have followed up their Can-Am competitions with NCAA National Championships, a FedEx Cup Title, and President’s Cup Team Member! Read more on their website.

The Team Ontario program is a unique opportunity for identified athletes in Ontario. They can expect to receive the very best in coaching services, training/competitive opportunities, and peer support as they continue their journey towards excellence in golf and life. Being part of the Team O program is a tremendous accomplishment, but the hard work and dedication don’t end there. The Team Ontario program places considerable emphasis on developing lifelong excellence in all facets, including time and self-management, strength and conditioning, sports psychology, nutrition, tactical strategies, and technical feedback. 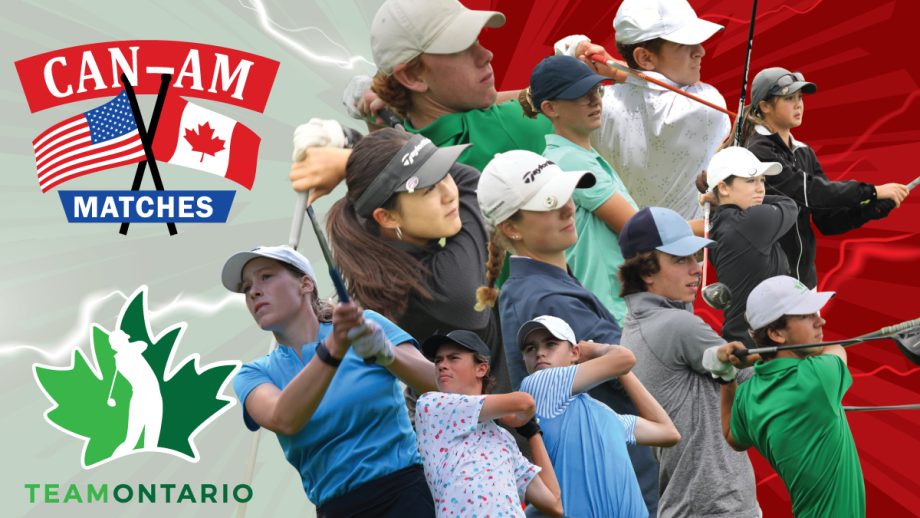 Uxbridge, ON – March has arrived, which means it’s time to let the madness begin… Golf madness, that is! As the 2019 defending champions of the Can-Am Junior Team Matches, Team Ontario will start their journey down to Myrtle Beach, South Carolina, on March 4th for just over two weeks of training camp and competition.

Our gracious host, the South Carolina Golf Association, will welcome Team Ontario back to Wachesaw Plantation Club for three days of competition to defend their 2019 title. Following two years of cancelled Can-Am Junior Team Matches, Team Ontario’s Head Coach, Reggie Millage, is excited for the athletes to gain this golf experience. They’ll put their skills to the test against the top eight junior boys and girls from South Carolina. “The Can-Am Matches are always one of the most anticipated events on the calendar for the athletes, coaches and staff at Golf Ontario,” explained Millage. “The last two years have been very challenging, making this year’s Matches even more special. I believe we are even more grateful and appreciative to have these opportunities. I can’t wait to get back to one of my favourite places at Wachesaw Plantation and reconnect with all the wonderful people that make this event happen.”

Starting March 5th, our partner Play Golf Myrtle Beach and the stunning Barefoot Golf Resort will host Team Ontario for thirteen days of training camp. During this time, the Team will work on physical, mental, and technical training, while also going through specific testing measures using tracking technology. Other activities during this trip include attending the General Hackler College Invitational from March 12th to 13th to watch NCAA Division 1 schools in action.

The Can-Am Junior Team Matches will tee off on March 18th with the Junior Am event, dinner, and opening ceremonies to welcome the athletes to Wachesaw Plantation Club. Juniors will play a round with members and event sponsors in a pro-am style for the Junior Am event. Following this, March 19th and 20th will be best-ball matches and single matches. More details and coverage will be published as training camp and competition gets underway.

To follow along with the Team Ontario’s South Carolina experience and the Can-Am Junior Team Matches, check out the Team’s (@TeamGolfOntario) Twitter and Instagram accounts for live updates and coverage.

In the 20 plus years, the Can-Am Junior Team Matches have seen over 125 South Carolina junior golfers who had participated in these matches go on to play competitive golf at the collegiate level. A select few of these youngsters have followed up their Can-Am competitions with NCAA National Championships, a FedEx Cup Title, and President’s Cup Team Member! Read more on their website.

MYRTLE BEACH, SC— It was a tough couple of days on the course, but a successful week of training, for the Golf Association of Ontario’s (GAO) U19 Team Ontario as they competed in the 16th annual Can/Am Matches against South Carolina in Myrtle Beach. Team Ontario last won the competition back in 2010, but their drought continued in 2014 as South Carolina won with an overall point total of 252 to 180.

The team had the opportunity to train earlier during the week at various courses around Myrtle Beach. Team Ontario had nothing but positive things to say about their hosts for the week and thanked all of the courses the team played and trained at. “Many thanks to great hospitality shown to our team from the staff and members of the Wachesaw Plantation Club throughout the week,” said Manager of Sport Performance Mary Ann Hayward. “Also, a big thanks to the golf courses that hosted us earlier in the week: Debordieu Golf Club, The Reserve Golf Club and The Dunes Golf and Beach Club. Thanks as well to the Legends Golf Resort and True Blue Plantation for allowing our team to train at the facilities.”

After the best-ball matches, South Carolina held an 87-57 lead, meaning Team Ontario had their work cut out for them in the singles matches. However, a grand comeback was not in the cards as they could muster only one win and a trio of ties during the second day.

“It was another tough day (March 16) for our Ontario Team,” said Hayward. “Although we battled back in several matches, the South Carolina Team would once again prevail. Grace St-Germain, Max Sear and Samantha Spencer all rallied back on their back nines but would still fall short in their matches. Ana Peric played solidly and tied her match.  Both Tony Gil and Trevor Ranton holed putts on their final hole to tie their respective matches.”

Even though the team did not bring back the title, there were many positives from the event. No doubt the story for Team Ontario was a day-two singles match win by 13-year-old Monet Chun. Chun took her match by a score of 11-7 while shooting one-under par, the first time she has broken par in a competition. Her feat was even more impressive considering the weather conditions the athletes faced during the second day of competition. “The weather was less than ideal today – with heavy rain for the latter part of the day.  We were impressed by the grit shown by our players today as they all fought hard to the very end,” said Hayward.