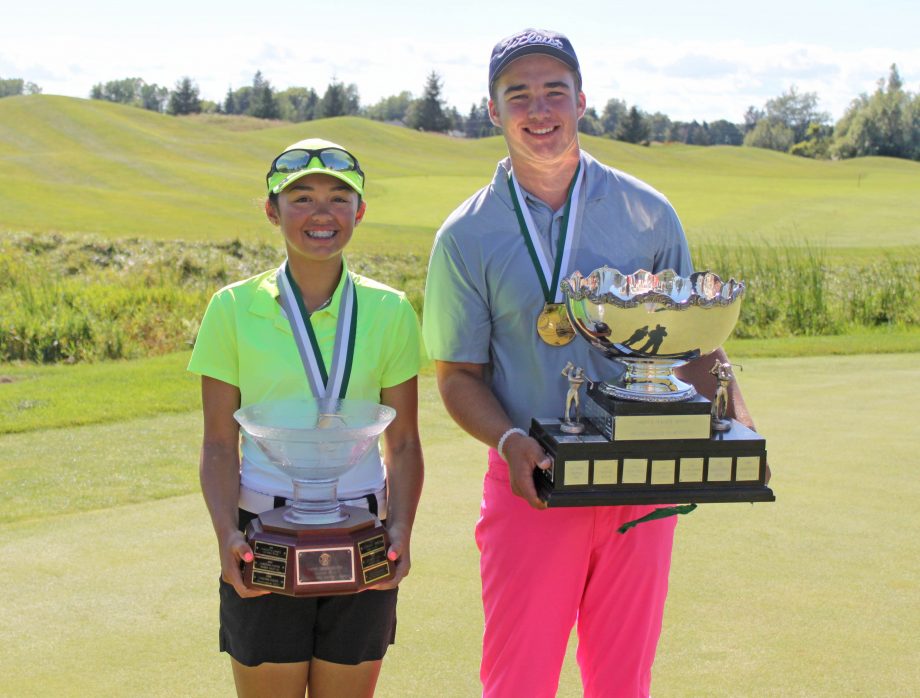 CAMLACHIE— The Golf Association of Ontario’s (GAO) Investors Group Bantam Championship concluded on Aug. 12 from the Sawmill Creek Golf Resort and Spa in Camlachie. The event began with 56 boys and 29 girls looking to claim the 2015 championships. At the end of the day, Stoney Creek’s Johnny Travale walked away with the boys’ title, while Markham’s Hailey McLaughlin took home the girls’ championship.

Travale, 14, from Glendale Golf & Country Club, came into the final round with a two-shot lead after his opening round of three-under (68). He got off to a blistering start during the final round and was four-under at the turn. However, he would get into trouble early on the back nine with a double bogey on 11 and a triple on 12. He would settle down and got back on track. He finished the day one-over (72) to end the tournament at two-under, taking the title.

After the win Travale spoke about how he got back on track during the final round. “I thought that I still had a good shot at winning, even though I didn’t know what my fellow competitors were doing, but I knew if I kept a solid frame of mind I would be able to pull through.”

“There was a lot of hard work that went into winning this,” added Travale. “I worked hard during the winter and continued during the summer so its nice to see it all pay off.”

Sharing the silver medal were Beamsville’s Jason Patrick Maloney and Courtice’s Justin Posteraro at three-over. Maloney, from Twenty Valley Golf & Country Club, began the day seven shots back of the lead after his four-over (75) first round. Thanks to a one-under (70) during the final round, the only round under par for the day, he catapulted into the silver-medal position.

As for Posteraro, he posted a one-under (70) during the opening round to sit two-back of the lead. He would go on to card a four-over (75) during the second round, but was able to hang on to earn a share of the silver.

Things were interesting on the girls’ side as the final round saw multiple lead changes. In the end it would be McLaughlin, from Cedar Brae Golf & Country Club, who emerged victorious. McLaughlin, 13, and a member of the York Regional Team, started the day in the second to last group, three-shots off the pace, after an opening round of seven-over (78).  She would go on to have the low round of the day, thanks to five birdies on the final six holes, posting a one-under (70) to capture the title at six-over for the tournament.

Afterwards, McLaughlin spoke about her strong finish to the tournament. “I was one-over through nine but was playing better than I had the day before. I really stepped up my putting and was sinking putts all day.”

“This feels like a dream but it is actually happening! I never thought I would make it this far, but at the same time I kind of did. I just had to have a lot of faith in myself,” said McLaughlin.

First-round leader, and 2015 Ontario Peewee Champion, Alyssa DiMarcantonio picked up the silver medal at eight-over for the tournament. DiMarcantonio from Maple and Station Creek Golf Club finished four-over (75) during the opening round. She duplicated that on day two with another four-over (75).

The GAO would like to thank Sawmill Creek Golf Resort and Spa, along with their staff and volunteers, for helping to run this event. Thanks also to the GAO volunteers and title sponsor Investors Group for their continued support of golf in the province. For full information, including the final leaderboards, see the tournament sites at: http://gao.bluegolf.com/bluegolf/gao15/event/gao1522/index.htm(boys) and http://gao.bluegolf.com/bluegolf/gao15/event/gao1586/index.htm(girls).

The Investors Group Ontario Bantam Boys’ Championship was first contested in 1923 at the Summit Golf & Country Club. The first Ontario Bantam Girls’ Championship was held in 2003. The event is open to players 14-year-old and younger as of Aug. 1. Participants on the boys’ side qualified through one of four qualifiers held earlier this summer. Notable past boys champions include: Tony Gil, Matt LeMay, Bill Hutcheson, Kelly Roberts and Tim McCutcheon. As for past girls’ champions, the list includes: Jennifer Kirby, Augusta James and Christina Foster.

ASHTON, ON— Port Credit resident Chloe Currie came into the second round of the Golf Association of Ontario’s (GAO) Ontario Bantam (U15) Girls’ Championship, Aug. 7 at the Canadian Golf & Country Club in Ashton, with a comfortable 11-shot advantage. She would see that lead to the end of the second and final round as she captured the 2014 championship.

“I made solid shots and had a plan. I went out and played the course according to my plan, the best I could. It was a challenging course. It wasn’t too long but it was tricky. There are a lot of 90 degree holes, tough bunkers and putting greens that become really fast when you’re putting downhill. You just need to get going and play steady. I think I was able to do well because I just played steady golf,” said Currie after the win.

The 14-year-old from the Mississauga Golf & Country Club had an opening round of two-over (74) and cruised through the second round finishing it at one-over (73) to end the tournament three-over for the win.

“This win would rank as the best career highlight for me so far. It is the best I have ever done in a tournament. I am so glad that I came to play this event. It was my last year to play in it and I wanted to come here, play strong, finish strong and I did.”

Currie had got herself to one-over for the tournament thanks to a birdie on the seventh hole. However, she would shoot two-over on the back nine. Still, it would not matter as Currie was able to hang on to win by an amazing 24-strokes.

“I was consistent on the par threes. My irons were great today and my putting was amazing, I made a lot of important putts that gave me momentum for the next holes,” added Currie.

Finishing second was Olivia Trieu from Richmond Hill, who ended the tournament at 27-over and Brampton’s Amanda Kerr was third at 29-over.

For the full leaderboard see the tournament site at: http://gao.bluegolf.com/bluegolf/gao14/event/gao1421/contest/1/leaderboard.htm 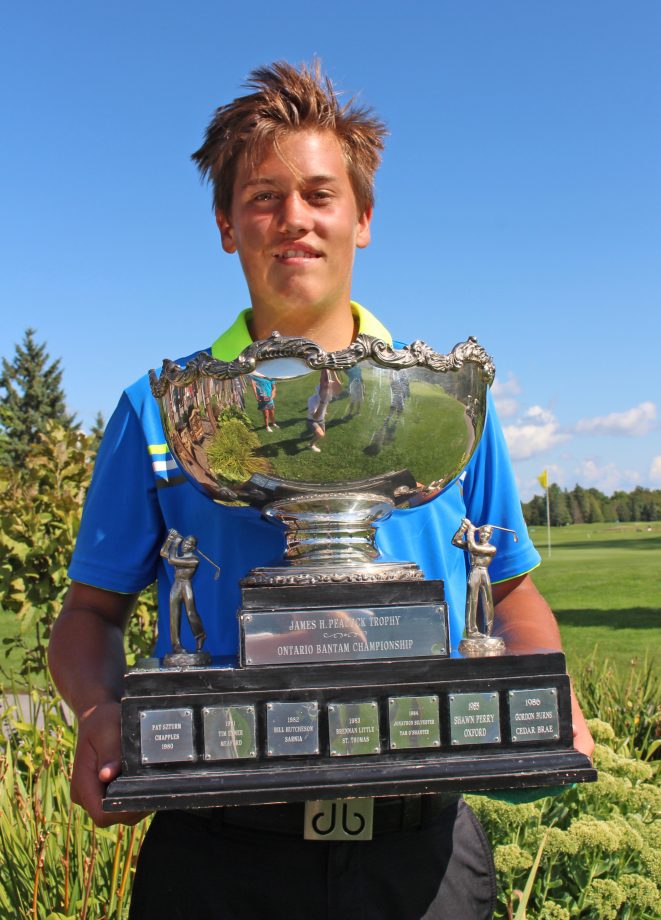 ASHTON, ON— Tecumseh’s Curtis Hughes entered the final round of the Golf Association of Ontario’s (GAO) Bantam (U15) Boys’ Championship, Aug. 7 at the Canadian Golf & Country Club in Ashton, seven shots off the lead. However, thanks to the round of the tournament, Hughes was able to jump up the leaderboard and claim the title.

After his first round, the 14-year-old was seven-over, but he came back during the second round with an amazing four-under (68) to win by a four-shot margin.

“My dad, who is the head pro and director at Rochester Place Golf Course, and I took a few hours after my round yesterday just to think and process what I would needed to do to win today. I wanted to make six birdies to begin the round and to get back to even, but that didn’t happen. Still, I made a few birdies out there and was able to win,” said Hughes

The Beach Grove Golf & Country Club member began the round with birdies on the second and fourth holes. He did bogey six, but that would be the only blemish on his round. He went on to birdie the 10th, 12th and 13th holes for the win.

“I haven’t played in many event’s this year,” added Hughes. “But it was a lot of fun. I really love playing in tournaments. This is definitely the number one result in my golf career so far.”

Finishing second was Richmond Hill’s Eric Byun. Byun entered the day one off the lead at one-over for the tournament. He would finish the round six-over (78) to bring his tournament total to seven-over.

Brampton’s Jacob Presutti finished third with a second round of seven-over (79) to finish the tournament at nine-over. Rounding out the top five were Whitby’s Brendan Dunphy at 10-over, and Brampton’s Max Wang at 11-over.

For the final leaderboard and results of all 57 players see the tournament site at: http://gao.bluegolf.com/bluegolf/gao14/event/gao1420/contest/1/leaderboard.htm