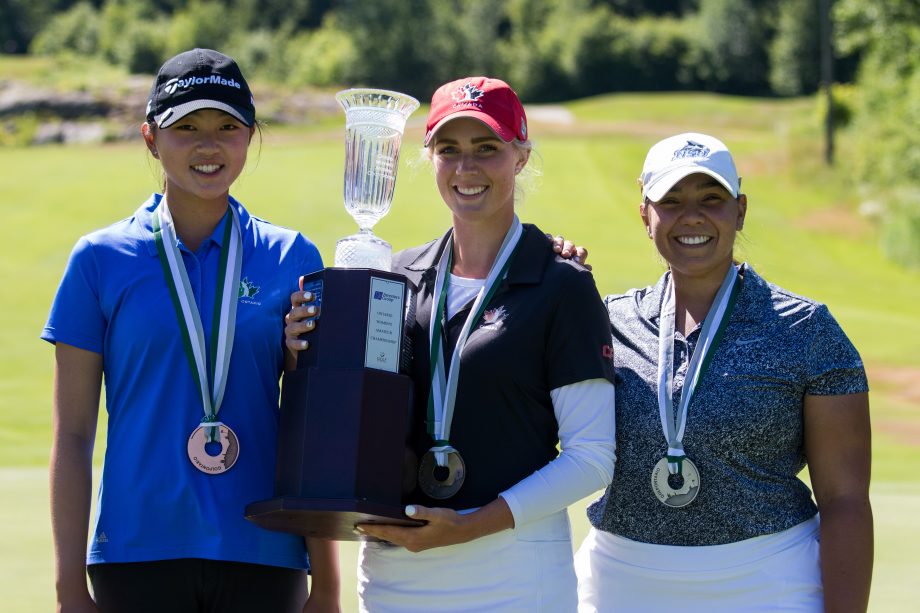 After a great week in the heat at Seguin Valley Golf Club, Ellie Szeryk, a member of Team Canada’s National Development squad fired a final round 74 at the Investors Group Ontario Women’s Am Championship to take home the trophy.

After leading the championship wire to wire, it left many wondering if there is a routine involved to allow Szeryk be so consistently strong throughout the four rounds and ultimately win a championship.  Ellie said that she plans her strategy well in advance, and uses the driving range to her advantage. “I go through my holes and my strategy and what I want to do for the day, and then I go on the range and try to get into a good groove and hopefully can transfer onto the course” –Ellie Szeryk

Ellie’s sister Maddie Szeryk won the championship In 2015, and Ellie was happy to join her sister as a champion of the tournament. “It will be really nice, to continue putting our name on the trophy… I’ll be able to go to her and tell her I won it before her, age-wise” said the younger Szeryk.

Ellie is proud to be a part of Team Canada’s National Development squad and said that it was nice to have fellow Team Canada Players, and Team Ontario Players there cheering each other on “it was nice having that support … I’m really close with them … they all came over and give me high-fives” – Ellie Szeryk

Much of Southern Ontario was met with a heat advisory from Tuesday-Thursday, but after a thunderstorm overnight between the third and fourth rounds, the temperatures cooled to allow for a break from the heat for the final round on Friday.  Michelle Ruiz of Diamondback Golf Club was +2 on the final day with a 73. She went 76-78-72-73 (299) to gain second place in the championship. In third place, was Victoria Zheng of Granite Golf Club who was +8 in the final round (79). Zheng went 74-78-72-79(303) to earn third place.