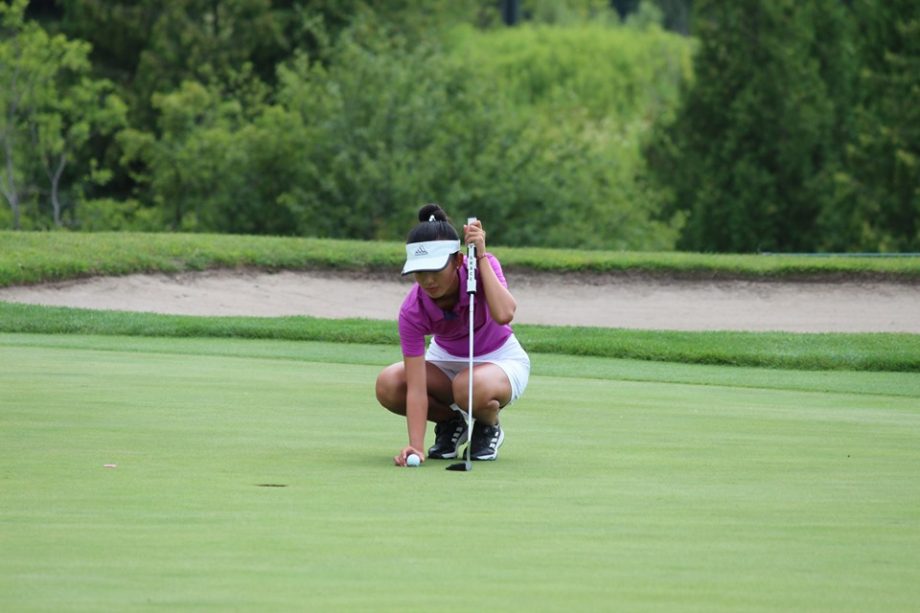 Ajax, ON — Warm and clear skies welcomed the players as they took to Deer Creek GC for the 2019 Bantam Championship. The best bantam boys and girls all came out to today’s round to try to get an early lead in the tournament.

The boys portion of the tournament kicked off at 8:00am Monday morning, and as the weather continued to heat up throughout the day, so did their play. By the end of 18, it was Carter Jarrett (Renfrew GC) and William Lin (Station Creek GC) who were able to climb ahead of the pack however and take the lead heading into the final day tomorrow.

With scores of even-par after the first round, the duo showcased some impressive play throughout the entire day, proving their ability to play a steady game. Both Lin and Jarrett carded three bogeys and three birdies alongside a handful of pars, leaving them in a good position heading into the final day tomorrow.

Trailing closely behind is Andreas Diogenous (Whistle Bear GC), who sits only one stroke behind the two leaders at +1, and with only five strokes separating the top 13 players, tomorrow’s round will without a doubt prove to be as competitive as can be.

For future scores, results, and information on the tournament, visit the official tournament page HERE

The girls got their portion of the tournament underway at 9:30 shortly after the boys. Entering the day, all eyes we’re on Ella Weber () after her championship run at the Junior’s just a week earlier. The first round saw some impressive play throughout the entire field, but it was Alexa Ouellet (Credit Valley G&CC)  and Krystal Li (The Summit G&CC) who came out above the rest.

With a score of +1, Ouellet was able to claw above the competition with some steady putting and solid play. With only four bogeys on the challenging course, the 13-year-old made sure to play it safe and control her shots, giving her a solid score to enter the final day with.

Similar to Ouellet, Li showed an impressive understanding of patience and incredible skill at putting. Playing her drives safe down the center of the fairway and hitting some putts many would find astounding, the 14-year-old Li sits tied with Ouellet for the lead, giving herself a great opportunity to come out on top as well.

“Tomorrow I’m just going to have to continue being consistent,” said Li when asked about her gameplan heading into tomorrow. “I’ll have to play both a strong long and a strong short game. Hopefully I can continue my momentum from today.”

Winning won’t be easy with players like Isabella Ferguson (Kanata G&CC) following closely behind however. Ferguson sat at -2 for a majority of the day until a rough patch near the end of her round. She will likely be returning tomorrow with hopes of making up some ground, and retaking the lead early.

For future scores, results, and information on the tournament, visit the official tournament page HERE