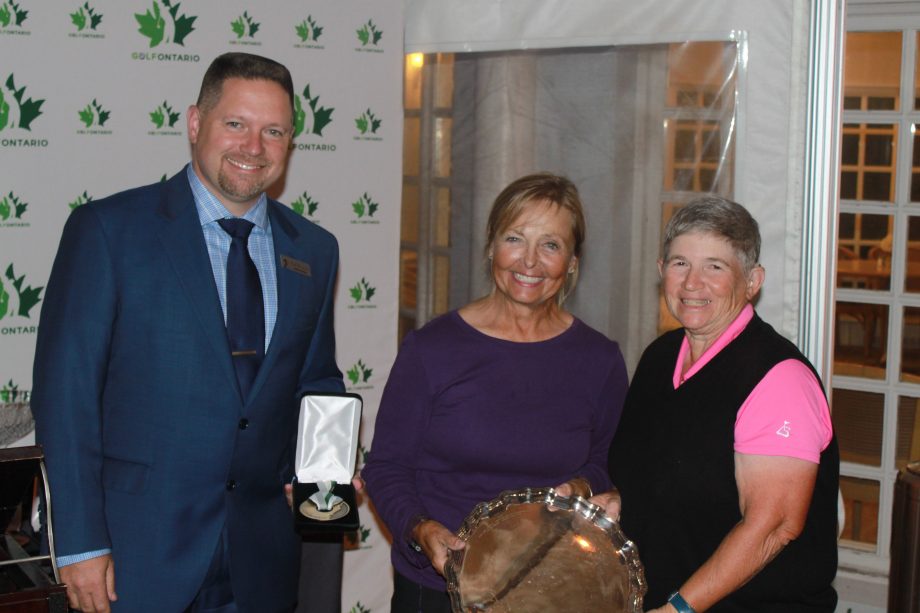 THORNHILL, ON — The final event on the women’s provincial championship calendar took place on Sept. 24 at Ladies Golf Club in Thornhill under cool and windy conditions. The ladies fought hard against the elements to still display some exceptional golf on the picturesque course, a Stanley Thompson design. With playoffs needed, they almost had to battle darkness too.

The Ontario Women’s Four Ball Championship is one of the more unique championships on the Golf Ontario schedule because it is open to all ages and today featured some very notable players including: World Golf Hall of Famer Marlene Stewart Streit, past champion Marion Reid, past two-time Senior Women’s Champion Ivy Steinberg and also Mary Ann Hayward, both an Ontario and Quebec Golf Hall of Famer and four-time Senior Amateur winner.

With all of the talented golfers in the field, a strong score would be needed in order to win.  After all was said and done, a four way tie of even par (72) set the stage for a cold and dark playoff match up. On the first playoff hole two teams were eliminated leaving Ivy Steinberg of Granite Golf Club and Kelly Koselek of CedarBrae Golf Club and Toronto Golf Club to capture gold on the second playoff hole over Katrina Myers and Jacinth Hoilett.

When asked what the championship win meant to them, Steinberg said “I’m very excited to be back in the winner’s circle after a difficult summer and obviously sharing it with a friend makes it even more special.” Steinberg added, “I’m so proud of Kelly winning her first provincial championship”.

After the playoff holes, the teams of Mary Ann Hayward and Joey Bush, Katrina Myers and Jacinth Hoilett and Liz Hadden and Tammy Barclay tied for the silver medal at even par (72).

Cindy Dunham and Lori Graves took the Net Division Trophy at a net total of 10-under (62).

The net silver medal went to the team of Joanne Barrington and Lynne Owen ( net 64). Bronze was awarded to the team of Kandice Brackenbury and Debbie Couch (net 65) .

Shot of the day might have gone to Janet Calderone who fired a hole-in-one on the 16th hole, a 168 yard par three.

Golf Ontario would like to thank the amazing staff of Ladies Golf Club for hosting the 2018 event, along with the Golf Ontario volunteers for their continued support of amateur golf in the province. For more information, including the final leaderboards, see the tournament site at: Click Here