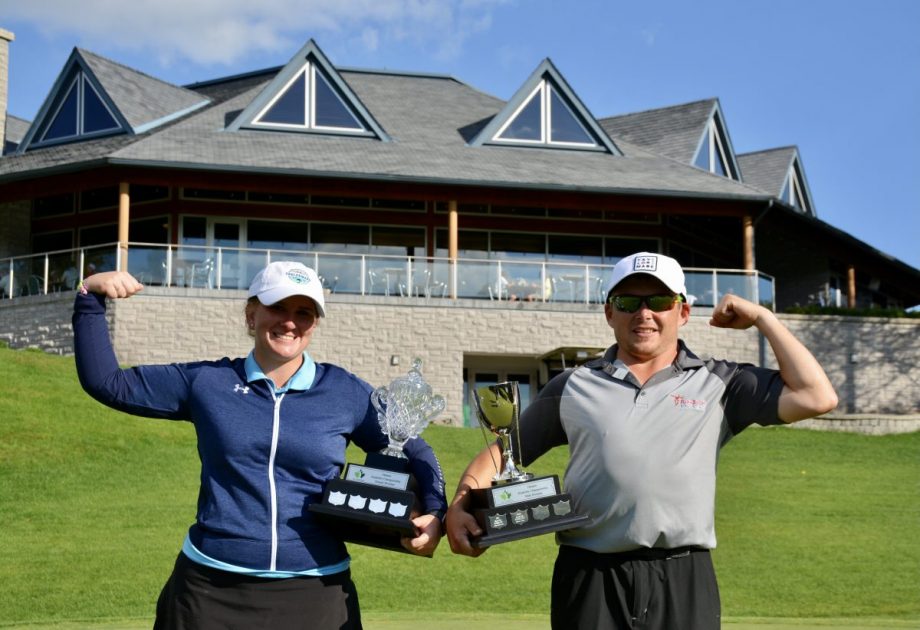 Tottenham, ON – The final round of the 2021 Ontario Disability Championship was greeted by beautiful weather today, as competitors took to the stunning Legacy course at Woodington Lake Golf Club. Returning to defend their titles and walking away as 3-peat champions, is both Natasha Stasiuk (Heron Point Golf Links) and Kurtis Barkley (Cedar Glen GC).

With her lowest round of the championship, Stasiuk shot a 92 to secure the title with an overall 188. Silver medalist Tess Trojan (Public Player) also had a strong round, tackling a couple of holes that were giving her a challenge in round one. Taking home the bronze medal following her first provincial championship is Samantha Lemieux (Hamilton G&CC), who bravely took on the challenging course with the support of her playing partners.

In the post win interview, Stasiuk felt confident heading into the championship this week. “My scores weren’t as strong as I know I can play, but I knew I could accomplish it.” Disappointed in her putting, Stasiuk commented that “the greens are very hard to play on.”  Barkley and Stasiuk actually discussed how challenging the greens were following the practice round on Tuesday. Stasiuk added that she would love to have more female competitors in the event. “There was a girl from England who completed a couple of years ago, so it would be nice to see more players from around the world.” Keeping a level head over challenging conditions, Stasiuk was just happy she got out to play golf with her dad as caddy. The next championship Stasiuk will be competing in is the inaugural Canadian All Abilities Championship, taking place next week at Humber Valley Golf Course.

After firing two-over in today’s final round, Barkley finishes just six-strokes ahead of silver medalist Russell Aide (Public Player). Aide, a Bantam aged player, tied with Barkley for the low round of the day after shooting a stellar 74. Oshawa Golf and Curling Club’s Geoffrey Beecroft finished in the bronze medalist position with an overall 160.

When asked if this year’s championship win feels any different, Barkley expressed that “today and yesterday was a challenge all together. It was a grind from the first shot till the end because this course can just take good shots and eat them up. You’ve got to take the good with the bad and just play one shot at a time.” Barkley said the overall course conditions were great, but “the greens are very tough for the speeds they play at.” Playing three times a week, Barkley’s motto is to take it one shot at a time. “That’s the beauty of golf, every shot is different.” This year Barkley qualified for the EDGA Dubai Finale, taking place alongside the DP World Tour Championship in Dubai in November. We wish him the best of luck in Dubai and at the inaugural Canadian All Abilities Championship, which he’ll be attending as well.

We would also like to highlight those who placed in the Men’s and Women’s Net Stableford divisions. Finishing in a tie for the gold medal is defending net Stableford champion, Gary Bos (Public Player), and silver medalist in the gross stroke play, Russell Aide (Public Player). Bronze medalist of both gross stroke and net Stableford divisions is Geoffrey Beecroft (Oshawa G&CC). On the women’s side, Tess Trojan secures her defending net Stableford champion title, with silver medalist Samantha Lemieux (Hamilton G&CC) finishing just eight points back. Natasha Stasiuk (Heron Point GL), winner of the gross stroke play, takes home the bronze medalist position. Congratulations to all the players who competed in the 3rd annual Ontario Disability Championship!

Golf Ontario would like to thank the players, rules officials, staff and volunteers for their support of the 2021 Ontario Disability Championship. To Woodington Lake Golf Club and their team – Head Golf Professional Scott Loosely, Superintendent Delky Dozzi, General Manager John Chetti, Marketing & Sales Manager Olivia Traetto, and the Food & Beverage Team – Thank you to you and your staff for the warm welcome and continued support of the Ontario Disability Championship.

To view the leaderboards from the 2021 Ontario Disability Championship, visit our Golf Genius page.