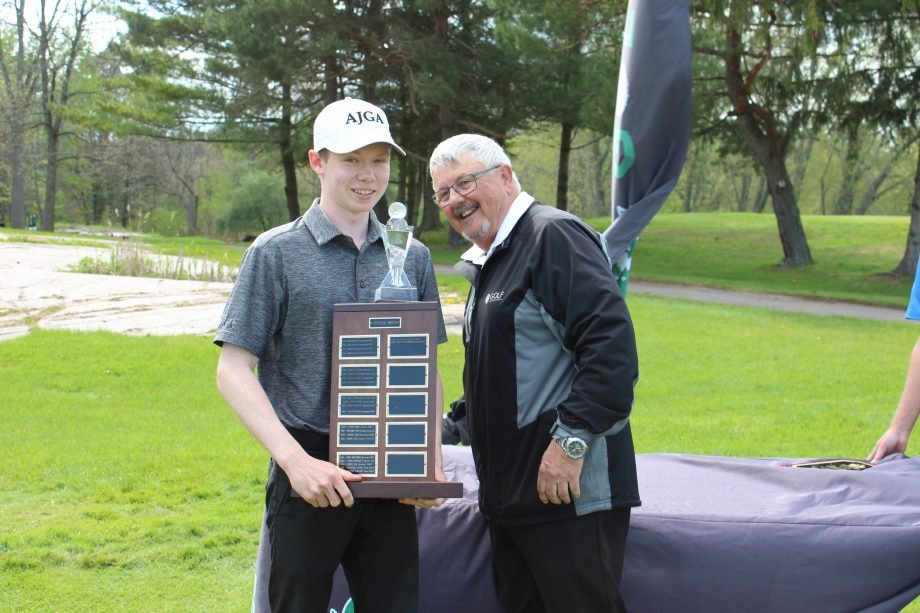 Brockville/Uxbridge, ON – On May 20th, both the Junior Spring Classic (U19) Boys and Girls Championships wrapped up, showcasing some of the best junior talent in the province. Most players were looking to close out the final day with good scores, and hopefully climb the leaderboard.

The Junior Spring Classic (U19) Boys Championship wrapped up on May 20th after three days at Brockville Country Club. When all was said and done it was Thomas Stafford who captured the boys’ title.

A mix of sun and cloudy skies, and strong winds could be found at the third and final day at the Junior Spring Classic (U19) Boys Championship. The Brockville Country Club’s course was a challenge for many players over the long weekend, with undesired winds and high elevations, it caused a lot of scores to end higher then expected.

Through adversity, it was Thomas Stafford from Golf Quebec who rose to the occasion. Shooting 2-under on his last round, he catapulted from the seventh spot in the standings to the first. Stafford originally dug himself into quite the hole on day two by double bogeying on three different occasions, but it was clear this didn’t faze him, as Stafford hit no worse then par on day three.

“I just tried to stay calm out there,” said Stafford. “I didn’t want to over-analyze anything. I had a good feeling going into the day and I kept a good mentality. Even when I made a mistake, I stayed calm because I knew everyone else was going to make mistakes.” Stafford’s final score would be +3 (216).

In second place it was Brandon White from Golf Quebec, the former leader coming out from day two. Although the healthy score separation going into the day, and some great shot making throughout, White couldn’t hold the lead from the red hot Stafford. White finished the tournament with a total score of +6 (219).

Completing the top three was Team Ontario’s Bennett Ruby from Westmount Golf and Country Club, who found himself right behind White with a score of +7 (220). Ruby had a stellar start on day one shooting -1, but much like White, he couldn’t maintain a lead over Stafford’s third round surge. Ruby played a steady round on day three, with two birdies on the last 5 holes.

Capturing the Juvenile Division was Peter Blazevic from Greystone Golf Club. Blazevic Club finished the tournament at +8. Thanks to his consistency over the three days, he was able to build up a big lead and rode it right through the final round to win the Juvenile Championship.

The exciting final round of the Junior Spring Classic (U19) Girls Championship also wrapped up today from Wooden Sticks Golf Club, featuring some very cold and windy conditions creating havoc for the skilled golfers. The day started with a very crowded leaderboard and after some juggling of positions, Jasmine Ly (Kingsville Golf & Country Club) battled through the tough conditions and took the title, shooting a solid even par (72).

Ly, a Team Ontario graduate, and 2018 Ontario Junior Girls Champion felt her round was good today considering the elements. “The conditions were definitely tough out there, the weather and everything. I had to stay patient,” Ly added. “I just tried to avoid putting up any big numbers.”

That game plan paid off as Ly would capture the title shooting steady through the whole weekend (74-75-72=221). In second place, and also winner of the Juvenile (U17) division, went to Victoria Zheng (Granite GC) with a good final round showing of +3 (75). A co-leader heading into the round, she chased Ly down the back nine but just couldn’t make up the strokes lost on the front.

Wooden Sticks, known for having some recognizable golf landscapes from the PGA, played even tougher than usual under the fierce weather conditions, yet still made for a thrilling weekend of junior girls golf.

The three day tournament challenged the focus, stamina, and skills of all the participating golfers. We would like to congratulate all who attended both Brockville and Uxbridge for their good play over the course of the weekend, and we look forward to seeing you in tournaments in the future!

For more information and complete results, visit the tournament page at:

Golf Ontario would like to thank the members, volunteers and staff at both Wooden Sticks and Brockville Country Club for their support over the course of the weekend.