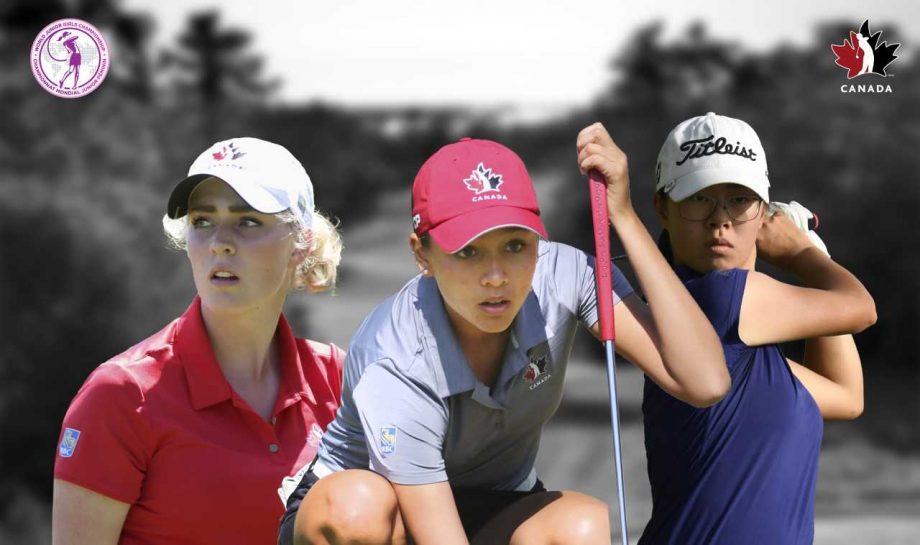 The world’s top 18-and-under female junior golfers will head to Ottawa for the fifth edition of the World Junior Girls Championship from Sept. 11-14 at Camelot Golf and Country Club. As host nation, Canada will send two teams of three athletes to compete for the international title of World Junior Girls champion.

Representing Canada One will be Céleste Dao (Notre-Dame Ile Perrot, Que.), Ellie Szeryk(London, Ont.) and Tiffany Kong (Vancouver, B.C.), who are three of Canada’s top-ranked junior golfers at No. 317, 459 and 546, respectively, on the World Amateur Golf Rankings (WAGR). Allthree recently competed in the 2018 CP Women’s Open at the Wascana Country Club in Regina,Sask.

Szeryk, sister of Canada’s top-ranked amateur female golfer Maddie, has four top-five finishes in 2018 so far, including a win at the Ontario Women’s Amateur Championship. The 16-year-old Team Canada Development Squad rookie currently sits in third in the Junior Girls Order of Merit and will be competing in her second World Junior Girls.

Kong will also be competing in her second World Junior Girls – she represented Canada at the 2015 tournament hosted at The Marshes. The 17-year-old recently competed in the 2018 CPWomen’s Open after qualifying as the Canadian Women’s Amateur Championship’s lowCanadian. With a win at the Ryan Moore Junior Championship and four top-ten finishes in 2018 under her belt, she currently sits fourth in the Junior Girls Order of Merit.

14-year-old Zhu is currently second in the Junior Girls Order of Merit. She has six top-ten finishes this year and competed in the 2018 Canadian Junior Girls Championship, where she came in second and took home the juvenile title. Her last win came at the 2018 Golf Ontario Investors Group Junior Spring Classic in May.

Kim is the youngest of all the Canadian team members – she only recently turning 13 in August. The rookie junior golfer held the lead during the first round of the Canadian Junior Girls Championship before finishing the tournament in eleventh. She won her first event in 2017 at the MJT – Boston Pizza National Championship and has five other-top ten finishes, including second place at MJT – Odlum Brown Classic and a tie for fifth at the Future Links, driven by Acura Pacific Championship.

“These six athletes have been selected to represent Canada as a result of their tremendousseason, hard work and commitment to the sport. Their accomplishments and selection is a resultof the support and joint efforts of Provincial Golf Associations, home clubs, parents and athletes,” said Jeff Thompson, Golf Canada’s chief sport officer. “It is a true honour to be selected to represent your country and we look forward to seeing this group proudly represent all of Canadaas they learn and grow on the international stage.”

“Golf Ontario is excited to once again partner with Golf Canada to conduct this globalchampionship at the historic Camelot Golf & Country Club,” said Mike Kelly, Golf Ontario executive director. “We are thankful for their membership and volunteer committees for all theirhard work. We are thrilled for our athletes from Ontario who have been selected to represent Canada and wish them the best of luck.”

Opening ceremonies for the championship take place on Sept. 10 followed by the first round onTuesday, Sept. 11. The tournament’s closing ceremonies will immediately follow the conclusion of play on Friday, Sept. 14.

“It is an honour to host this prestigious event and we look forward to welcoming these players from across the globe to our nation’s capital,” said tournament director Dan Hyatt. “The course is

in tremendous shape and our partners at Camelot Golf and Country Club as well as communities in the surrounding area have come together to make this a truly memorable event for ourcompetitors.”

Admission to the competition is free. Additional information regarding the fifth annual World JuniorGirls Championship can be found on the competition’s website.

The World Junior Girls Golf Championship is an annual event conducted by Golf Canada in partnership with Golf Ontario. The international competition features three-player teams of 18- and-under athletes. As host country, Canada will field two of the tournament’s 20 teamscompeting over 72 holes for both individual and team honours. The event receives funding from the Ontario Ministry of Tourism, Culture and Sport; Ottawa Tourism; the Golf Canada Foundation (Women’s Golf Fund); Sport Canada; the R&A; and Levelwear. Admission and parking for the World Junior Girls Golf Championship is free. For more information, visitwww.worldjuniorgirls.com.

Golf Canada is the National Sports Federation and governing body for golf in Canada representing 319,000 golfers and 1,400 member clubs across the country. A proud member of theCanadian Olympic Committee, Golf Canada’s mission is to grow participation, excellence and passion in the sport while upholding the integrity and traditions of the game. By investing in the growth of the sport and introducing more participants of all ages to the game, our goal is to be relevant to and respected by all Canadian golf enthusiasts from coast to coast. For more information about what Golf Canada is doing to support golf in your community, visit www.golfcanada.ca.