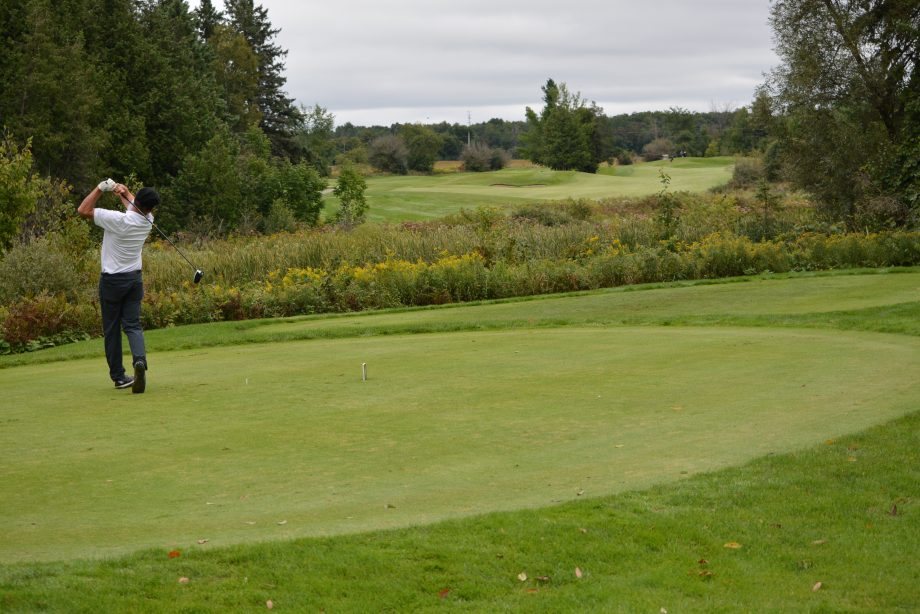 Barrie, Ont. – Competitors arriving early for the first round of the Baka Public Championship at National Pines GC were greeted with cold and damp conditions. With hanging mist and wet conditions for the earlier first waves of tee times, competitors had to deal with sitting dew and water which offered minimal play and roll on both fairways and greens.

With three championship flights taking to the course from the 1st and 10th tees, golfers in the A flight (gross) and two net flights (B and C) tackled the challenging National Pines course. Tight tree lined rolling fairways with many first shot carries provided a tough yet fair track for day one of the two-day tournament.

In the A Flight which is a gross competition, Shyamal Nagindas of Aurora closed out the first 18 holes and was in the clubhouse at +1. His four birdie round sees him leading by three over Peter Willis of Aurora and Arnold Johnson of Brampton who both came in at +4. One stroke behind at +5 sees four players who all hope they can make moves on day two.

B Flight and the first net score competition sees Robert Sterling of Mississauga atop the leaderboard with a first round -3 under. His net score of 34/35 for 69 has him sitting four shots ahead of Justin Arrowsmith of Bradford and Jerry Power of Brampton both in at +1. Things tighten up with a large group between +4 to +7 all of whom will be looking for possible Top 10 positions tomorrow.

Rounding out the leaderboard is the C Flight which again is a net competition. With a net hole-in-one on the fourth hole Romi Lat of Stouffville holds a one shot lead and was in the clubhouse at -3. One shot behind at -2 were Robert Fulton of Toronto who also celebrated a net hole-in-one on the 15th and Steve Stone of Whitby. In at -1 are Mark Van Alstyne of Toronto and Frederick Flores of Barrie.

For many competitors this was their first experience competing in a Golf Ontario championship while others are seasoned veterans. The Baka Public Championship provides the perfect opportunity for those interested in trying a competitive tournament while providing gross and net flights which provide similar handicap groupings. Anyone who has considered trying one of Golf Ontario’s events should look to the 2019 Baka Public Championship and consider it.

With a mix of sun and cloud and warmer conditions in the forecast for tomorrow, the second round promises to be an exciting conclusion to the 2018 Baka Public Championship.