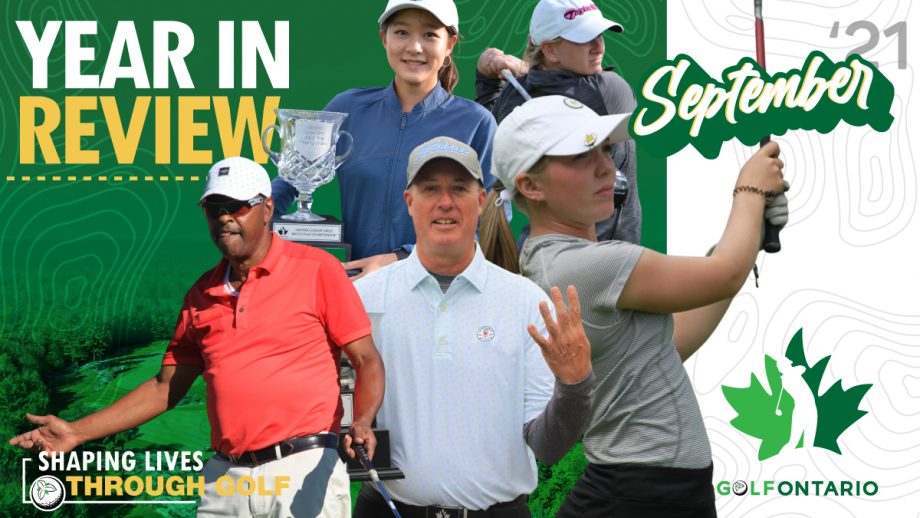 The final round of the 2021 Ontario Disability Championship was greeted by beautiful weather as competitors took to the stunning Legacy course at Woodington Lake Golf Club. Returning to defend their titles and walking away as 3-peat champions were Natasha Stasiuk (Heron Point Golf Links) and Kurtis Barkley (Cedar Glen GC).

With her lowest round of the championship, Stasiuk shot a 92 to secure the title with an overall 188. Silver medalist Tess Trojan (Public Player) also had a strong round, tackling a couple of holes that were giving her a challenge in round one. Taking home the bronze medal following her first provincial championship was Samantha Lemieux (Hamilton G&CC), who bravely took on the challenging course with the support of her playing partners.

On the men’s side, Barkley finished six-strokes ahead of silver medalist Russell Aide (Public Player). Aide, a Bantam aged player, tied with Barkley for the low round of the day after shooting a stellar 74. Oshawa Golf and Curling Club’s Geoffrey Beecroft finished in the bronze medalist position with an overall 160.

Early heavy fog delayed a dramatic final round of the Ontario Senior Men’s Championship, from Loyalist Golf & Country Club. An hour delay exactly, saw the men start at 9:00 am before being able to tackle the challenging course on their quest for gold. That quest came down to a 10-foot birdie putt on the 18th hole to decide our champion.

Ashley Chinner (Coppinwood) fought back from a four-stroke deficit, behind 2020 Champion Dave Bunker (Cherry Hill Club), to drain his birdie putt on 18 and claim the prestigious title. Chinner recorded a strong three-under (69) to catch and surpass Bunker, who along with third-place finisher Robert Cowan (Westmount G&CC), shot a two-over (74).

As well as crowning the Ontario Senior Men’s Champion, we also saw hardware handed out for the age 65 and over category, and age 70+ divisions. Ronald James White (St. George’s &CC) captured the 65 and over division, while Kerry Short (Cherry Hill Club) won the 70 and over division.

Conducted since 1936, the Ontario Senior Men’s Championship event features Ontario’s best male amateur golfers aged 55 and over, competing over 54 holes of stroke play competition. Canadian and Ontario Golf Hall of Fame member Nick Weslock, one of Canada’s greatest amateurs of the century, won the event a record 11 times between 1968 and 1980. Other notable past champions include Stu Hamilton (2001, 2006), Mike Jackson (2010, 2011 and 2013) and Ontario Golf Hall of Fame member Warren Sye in 2012.

Day two of the 2021 BAKA Ontario Public Amateur Championship saw some spectacular golf at Tarandowah Golfers Club. Three winners were crowned, with Robert McLean taking the A flight with a gross score of +4 (144). Joel Niles won the B flight with a net score of even-par (140) and Jeff Roberts won the C flight in a playoff with a 2-under (138).

The B flight came down to the wire and Joel Niles came out on top with a 2-day total of even-par (140). Tied for second only 1 stroke back were Colin Edwards and Kyle Stolys who both carded a 2 day total of 1-over (141). The win for Niles was a result of a very strong day two net score of 5-under 65, which enabled him to jump 9 spots in the standings.

A playoff was needed to crown the C flight champion. Jeff Roberts and Mike Murphy finished regulation play with identical 2-under (138) scores and went to a 3-hole playoff. Both players were lights out in the playoff with Roberts firing 3 pars to take the championship. Finishing in 3rd at even par (140) was Andrew Schlegel with a sizzling net 64 on day two.

Summer-like conditions welcomed 68 players in teams of two at the Ladies GC of Toronto for the 67th annual Ontario Women’s Four-Ball Championship. With warm weather came hot play, and the day proved to be competitive just like years in the past.

After 18 however, it was Aryn Matthews (Bigwin Island GC) and Nyah Kelly (Lindsay G&CC) who prevailed. The duo finished the tournament with an impressive six-under (65), including 7 birdies on their card to leave as four-ball champions.

Trailing just two strokes behind in second place, was Sarah Yang and Michelle P. Ding (both of Station Creek GC), who recorded a solid four-under (67). Finishing in third was the duo of Emily Zhu (Public Player) and Cynthia Zhao (Station Creek GC), after firing a three-under (68).

As for the Low Net portion of the tournament, it was the team of Angela Penfound and Gail Bishop (Midland G&CC) who came out on top after a three-hole playoff against fellow club players Susan Rooney and Mary Sallinen, also of Midland G&CC.

First played in 1953, the Ontario Women’s Four-Ball Championship is contested annually and features two-woman teams competing in a better-ball 18-hole format. In total, 46 teams and 92 players took part in the 2018 event.

Greeted by fog and a misting of rain, the final round of the 2021 Ontario Junior (U19) Boys’ and Girls’ Match Play Championship ended with two Team Ontario athletes claiming the titles. Owen Kim (Blue Springs GC) and Alissa Xu (Station Creek GC) conquered the challenging Tangle Creek Golf and Country Club while enduring less than ideal weather conditions, for a total of 108 (90) holes of golf over three days.

The Semi-Final round teed off at 8:00 a.m. that morning, with Luke Smith (The Thornhill Club), Ethan Irvine (Hamilton G&CC), Andreas Diogenous (Whistle Bear), and Owen Kim (Blue Springs GC) fighting for a spot in the final round. In a well fought battle, bronze medals would be awarded to Smith and Diogenous. Irvine took Smith in 2&1 to advance to the final round, while the other Boys’ match would continue to five playoff holes. Kim went head-to-head against Team Ontario teammate, Andreas Diogenous (Whistle Bear), to come out on top. In the final round, Irvine and Kim were even at the turn, with Kim winning two holes on the back nine to take the title 2&1.

The Junior Boys’ Match Play Championship has been contested since 1998 featuring Ontario’s top 16 amateur male golfers age 18 and under. The field is determined by results from four qualifiers. Notable past champions include Matt McQuillan, Justin Shin, Stephane Dubois, and Jon Boncoddo.

Cold conditions greeted competitors for the final round of the 2021 Ontario Men’s Mid-Amateur Championship, at the gorgeous Taboo Muskoka. The temperature may not have risen, but the competition absolutely did, as we would see a champion crowned only after playoff holes.

Walking away after two extra holes, is now four-time winner of the Ontario Men’s Mid-Amateur, Dave Bunker (Cherry Hill Club), with a solid even-par on the final day (71). Jonn Drewery (Westmount G&CC) shot a two-over (73), and would eventually miss a difficult par putt save on the second extra hole to secure the win for Bunker. The bronze medal was won by our 36-hole leader Brett Mitchell (Galt Country Club), after shooting a four-over (75). Round of the day belonged to Robert McCraken, who fired a brilliant four-under (67) to climb the leaderboard into fourth place.

The Ontario Senior Men’s Better-Ball Championship took to the prestigious course at Brampton Golf Club on September 30th. With just 18-holes of competitive stroke play to determine the 2021 champions, the Toronto Golf Club’s David Wilson and Eamonn McConnell came out on top.

Taking home the championship title with a stellar round of 67, Wilson and McConnell battled the field to win just one stroke ahead of a tight leaderboard. Silver medalists, Jay Campbell and Scott Hepburn (Oaks G&CC) held off a pack of third-place winners with a smooth three-under 68 total. In the bronze medalist position we had a tie between six teams, consisting of the following; Phil Charal and Tony Robinson (Summit G&CC), Gawain Robertson and Jack Moussaoui (Cataraqui G&CC), Mark Kalbfleisch and Brad Stumpf (Oshawa G&CC), John Saffran and John Zdonek (Pointe West GC), Brian Humphrys and Rick Robinson (The Pulpit Club), and Bruno Ardito and Gary Parker (Brampton GC Ltd.).

In our final Season in Review next week, we look at a busier than usual month of October that included our week-long Junior Super Camp & Tour Championship, and the Ontario Men’s better-Ball Championship.