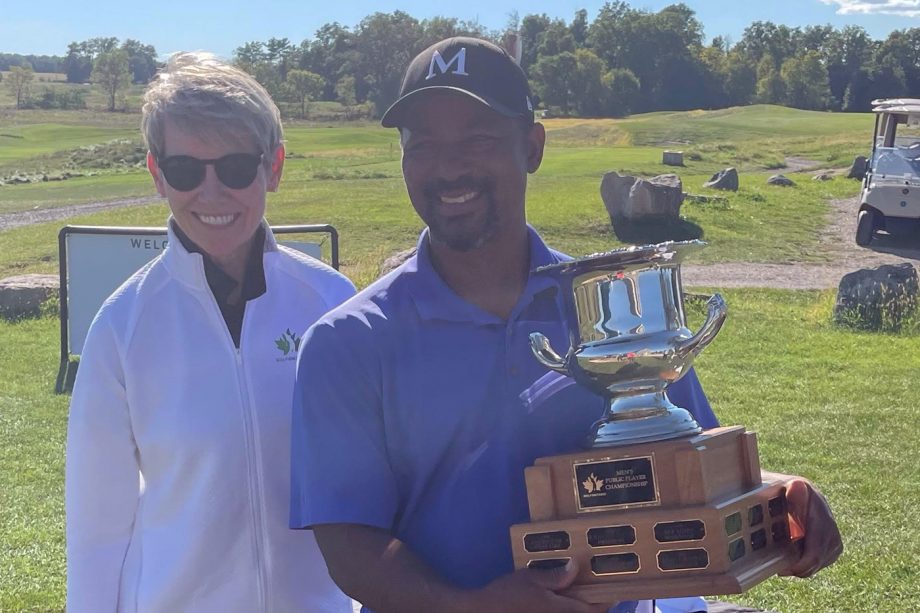 Springfield, ON – Day 2 of the 2021 BAKA Ontario Public Amateur Championship saw some spectacular golf at Tarandowah Golfers Club. 3 winners were crowned today, with Robert McLean taking the A flight with a gross score of +4 (144). Joel Niles won the B flight with a net score of even par (140) and Jeff Roberts won the C flight in a playoff with a 2-under (138)

The overall champion and A flight winner was Robert McLean who fired a spectacular 1-under 69 which included 4 birdies and just 3 bogeys. When asked about his winning performance after the round, McLean enthused “I felt great, a good front nine yesterday and a bad back nine, but I wanted to come out strong today. I knew putting was going to be key today and I showed up 45 minutes early to focus on my putting and it paid off. The course was really great with greens running very true”

The B flight came down to the wire and Joel Niles came out on top with a 2-day total of even par (140). Tied for second only 1 stroke back were Colin Edwards and Kyle Stolys who both carded a 2 day total of 1-over (141). The win for Niles was a result of a very strong day 2 net score of 5-under 65 which enabled him to jump 9 spots in the standings. Niles was thrilled with the win saying “My driving was the key for me today. Yesterday I was spraying it a little bit off of the tee but today I was very solid and kept my tee shots on the fairway which really helped with this course”. Niles also attributed the win “to my wife who showed up on the back nine and was my good luck charm, being Irish and all”

A playoff was needed to crown the C flight champion. Jeff Roberts and Mike Murphy finished regulation play with identical 2-under (138) scores and went to a 3-hole playoff. Both players were lights out in the playoff with Roberts’ firing 3 pars to take the championship. Finishing in 3rd at even par (140) was Andrew Schlegel with a sizzling net 64 on day 2. Roberts’ was very happy with his win, saying “that while I hit the ball well, it was my putting who was the star today. The course was great and making some great up and downs with strong putting was key”

Golf Ontario would like to thank the players, volunteers, rules officials, staff and members for their support of the 2021 Ontario Women’s Amateur and Mid-Amateur Championship. To Tarandowah Golfers Club and their passionate team –
Owner Rashad Ayyash, Head Professional and GM Andy Shaw, Assistant of Operations and Golf Services Charlie Richard, Superintendent Dan Lavis, and Head Chef Guillaume Danoizel: thank you to your staff and volunteers for being such welcoming hosts on a stunning links-style golf course.

Lastly, a huge thank you to our sponsors and partners; Baka Mobile who have been consistent supporters of the Ontario Public Player Championship, as well as Triple Bogey who were presenting sponsors of the event and help provide refreshments to the players. As well, adidas, TaylorMade, Golf Talk Canada, Play Golf Myrtle Beach, Humber College, HUB International, BioSteel, Golf Genius, Modern Golf, Dormie, Durham Artificial Grass, Foresight Sports Canada, Baka, Nikon, Solo Golf, and Sport Travel. We are grateful for your continued support.

To view the leaderboards from the 2021 Baka Ontario Public Amateur Championship, presented by Triple Bogey, visit our Golf Genius page.