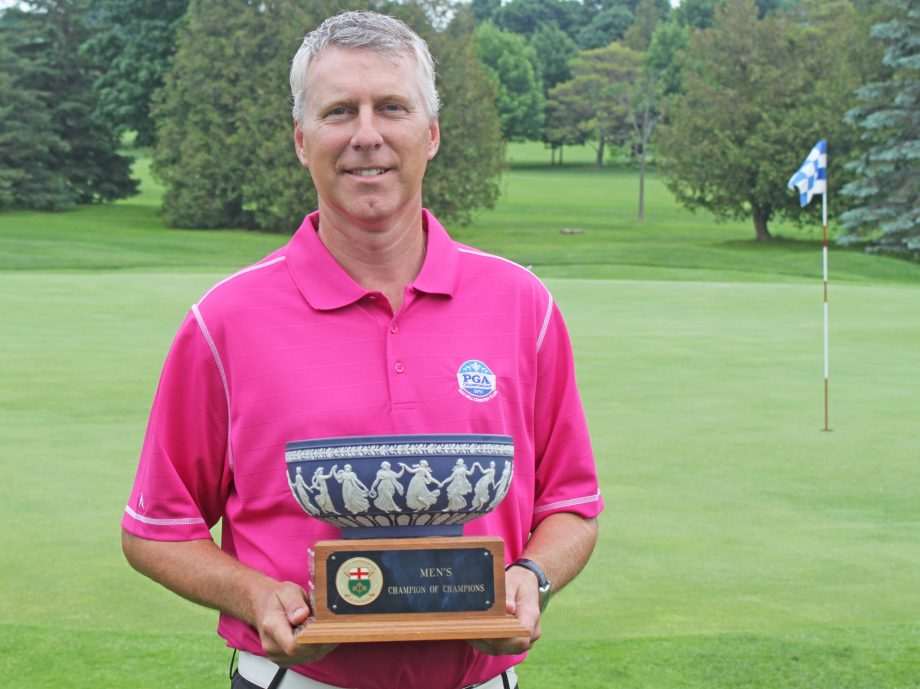 PETERBOROUGH — For the second day in a row a Golf Association of Ontario (GAO) event needed a playoff to produce a winner. This time it was at the Men’s Champion of Champions, June 12 at the Peterborough Golf and Country Club.

Rob Cowan tees off on the first playoff hole

After 18 holes two players carded even-par 71s: Wellesley’s Rob Cowan and Odessa’s Peter Beneteau. For Cowan, the Westmount Golf and Country Club member, he went about his round consistently, paring his first nine holes and continued his consistency on his back nine with a couple birdies to balance out his bogies. As for Beneteau, the Camden Braes Golf and Country Club member was actually two-under late in his round. However, a couple of late mistakes dropped him back to even to finish the round.

On the playoff hole, the 49-year-old Cowan had a nice drive that found the fairway giving him a 140-yard shot to the green. Meanwhile, the 17-year-old Beneteau tried to play it safe by hitting an iron off the tee. He was a bit further back and on his second shot he went right of the green landing just under the branches of trees and in front of a bunker. It was a tough look and Beneteau’s third shot found the sand. Cowan put his second on the green and was able to comfortably two-putt for the win, making him a two-time winner of the event.

Peter Beneteau ran into trouble on the playoff hole, finding the bunker.

Cowan talked about his consistency after the win. “I started off with those nine consecutive pars then finally birdied 11. I made another on 12 from the fringe. I made a couple chunky mistakes and bogeyed 16 and then just ran out of steam on some putts that could have resulted in more birdies.”

The day began for Cowan with a shotgun start on hole two meaning he finished his round with the first hole. Cowan says he played the first very aggressively, the first time, and found the bunker. Yet he learned from that and with the playoff right back on the same hole, he didn’t take as aggressive of an approach, something that worked out for him as he pared it for the win.

The win adds to Cowan’s GAO collection, which includes a 2010 win at this event and an Ontario Match Play Championship. “It’s cool! I knew the first one wasn’t an accident because I won by five but it is nice to get another one. The guys joked around saying ‘You’ve got to keep up with (Dave) Bunker’ who just won the Ontario Match Play. For me, any GAO win is good win!”

Rob Cowan and Peter Beneteau shake hands after the playoff hole that resulted in the win for Cowan.

Cowan added that he thought the key to his round was that he never really played with any danger. “There was never really a threat of anything really bad happening. When I made my second birdie I just said to myself ‘Don’t make any mistakes’ and I hit well enough to get the job done.”

Cowan will now turn his attention to the Investors Group Mid Amateur in just over a week at Taboo Resort. He says he feels prepared after playing a practice round at the course when he was in nearby Port Carling last week for the Ontario Match Play. After that he will also take part in the Investors Group Ontario Amateur July 8-11 at The Club at North Halton a course he says he feels very good about.

Rounding out the top three was a three-way tie for third. Matthew Wheeler, of Toronto and Beacon Hall Golf Club; Nicholas Striker, of Waterloo and Oviinbyrd Golf Club; and Nicholas Ross, from Dundas and the Hamilton Golf and Country Club, all finished one off the lead at one-over 72.

The Ontario Men’s Champion of Champions was first contested in 1946 and features men’s club champions from Golf Association of Ontario member clubs across the province. Past champions of the event include Ontario Golf Hall of Fame members Bill Morland, Gerry Kesselring, Warren Sye, and Stu Hamilton, as well as Big Break Indian Wells champion David Byrne. The Golf Association of Ontario would like to thank the Peterborough Golf and Country Club for hosting the event and for their continued support of amateur golf in Ontario.