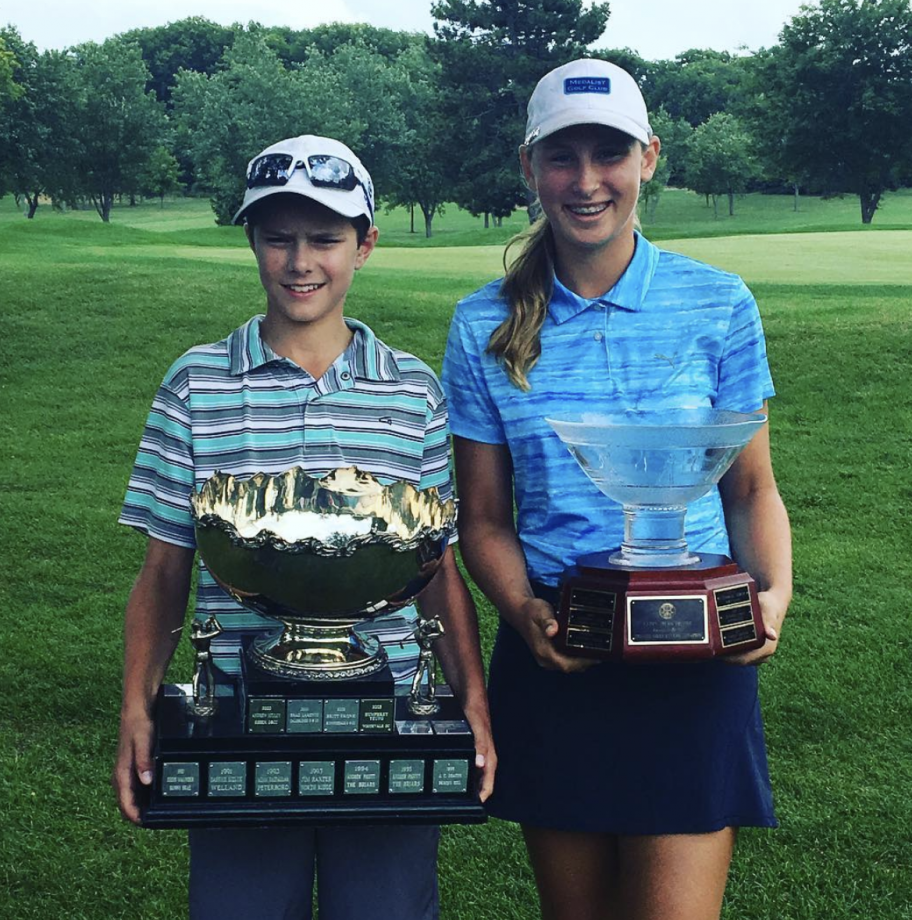 Fenwick, ON- Brooke Rivers of Brampton Golf Club held her lead from the first day to win the girls championship after two rounds. Alex Long of Credit Valley Golf and Country Club had a lead after the first round, but during moments of the second round found himself tied at times for first place with his competitors. In the end, he would carry his solid game through the entire day to prevail and win the boys championship.

The final round of the Investors Group Ontario Bantam (U15) Championship took place today at the beautiful Sawmill Golf Course in Fenwick Ontario.  While the first round of competition on Tuesday was plagued by rain, delays, and hot temperatures, the final round of the championship which took place today was a windy day, with cooler temperatures allowing some relief for the golfers.

Nicole Gal of Oakville Golf Club was awarded a silver medal for her efforts this week, she started out the front nine at par 35 with three birdies and three bogies, she then finished the back nine (+2) 38 with one birdie and three bogeys. She went 78, 73 for a total of 151 over two days.

Brooke said a lot of focus on her game worked out for her this week, and her strategy was simple, “Just trying to focus on my game, not play too risky (of) shots. Pars are your friend. Try not to make doubles. That didn’t work out. Just try to be consistent”.  She said she is happy to have won, “It’s really nice to win. I had a lot of fun playing with all the girls, and they were all supporting me, … they were all cheering for me when I made putts” – Brooke Rivers.

Alex Long of Credit Valley Golf and Country Club started out the front nine (+3) 38 today with three bogeys and went out on the back nine (-3) 33 with three birdies. He was even through the day with a 71.  He went 67, 71 over two rounds for a total of 138.  In second place was Justin Matthews of Oshawa Golf and Curling Club who started out the front nine today (-2) 33 with three birdies and a bogey, he then finished up the back nine at par 36 with a double bogey and an eagle. He went 72, 69 for a two day total of 141.

Long was happy to have won today, after winning the Golf Ontario PeeWee Championship earlier this season at Lakeridge Links Golf Club, winning two championships in one year is extra special.  After a (+3) front nine, he wanted to post a red number on the back nine, and he did, he was (-3) on the back nine, with a great even par day 71.