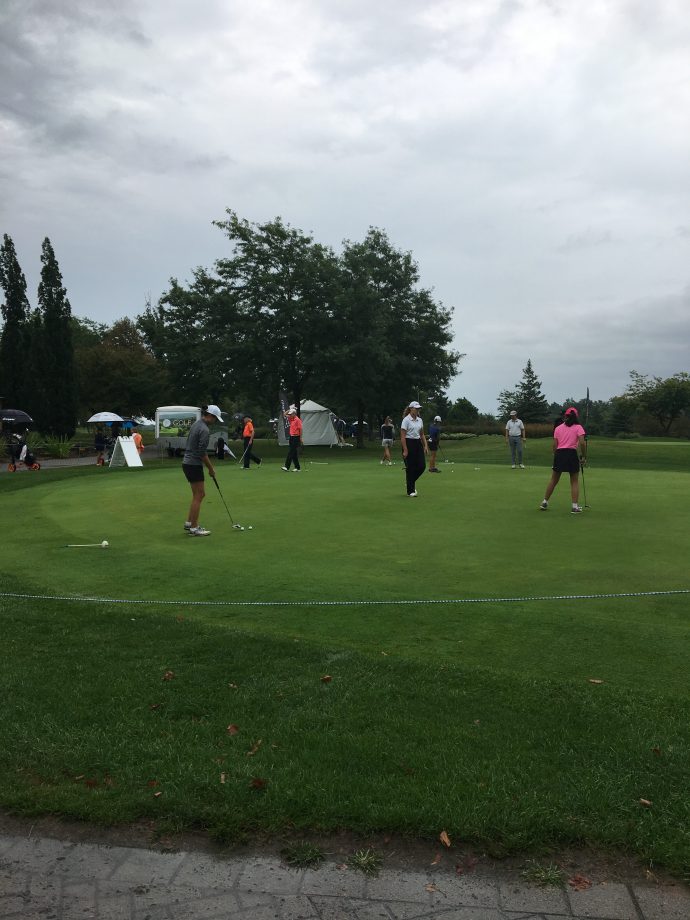 Brooke Rivers of Brampton Golf Club and Alex Long of The Country Club lead the first day of the Investors Group Ontario Bantam Championship.  The first round of the championship, which was held today at Sawmill Golf Course in Fenwick, Ontario was scheduled to start at 8 a.m. this morning, but inclement weather delayed the play from starting until 8:20, and there was another delay mid-morning for 45 minutes which left golfers teeing off until 11 am.

Alex Long of The Country Club was continuing his hot play coming off his recent Peewee championship, carrying it right into the bantam championship today, he leads the boys’ competition (-4) 67 through the course today. He was -2 on the front nine with two birdies and -2 on the back nine with three birdies and a bogey. Thomas Latter of Credit Valley Golf and Country Club and Peter Blazevic of Greystone Golf Club are T2 (-1) 70 after the first round.

In the girls’ competition, Brooke Rivers of Brampton Golf Club shot even par 71, while Jillian A Friyia of Highland Country Club and Ella Weber of Rattlesnake Point Golf Club are T2 (+6) 77.

Brooke Rivers was complimentary of the course and said that “the course itself was really, really nice, the greens are really easy to read, which is nice, so you aren’t guessing”, she had a great day today on the course, and yesterdays’ practice round helped with her confidence on the course today, “I played well, I was very happy. Front nine, I did make a bogey, and I didn’t make a birdie. Other than that it was a pretty solid round for me. I would have liked a couple more birdies”

The second round of the championship will take place tomorrow morning starting at 8 a.m., tee times can be found here for the boys’ competition, and the girls’ competition.