Rank wins the Investors Group Men’s Mid-Am with a hat-trick after his week at the U.S. Open 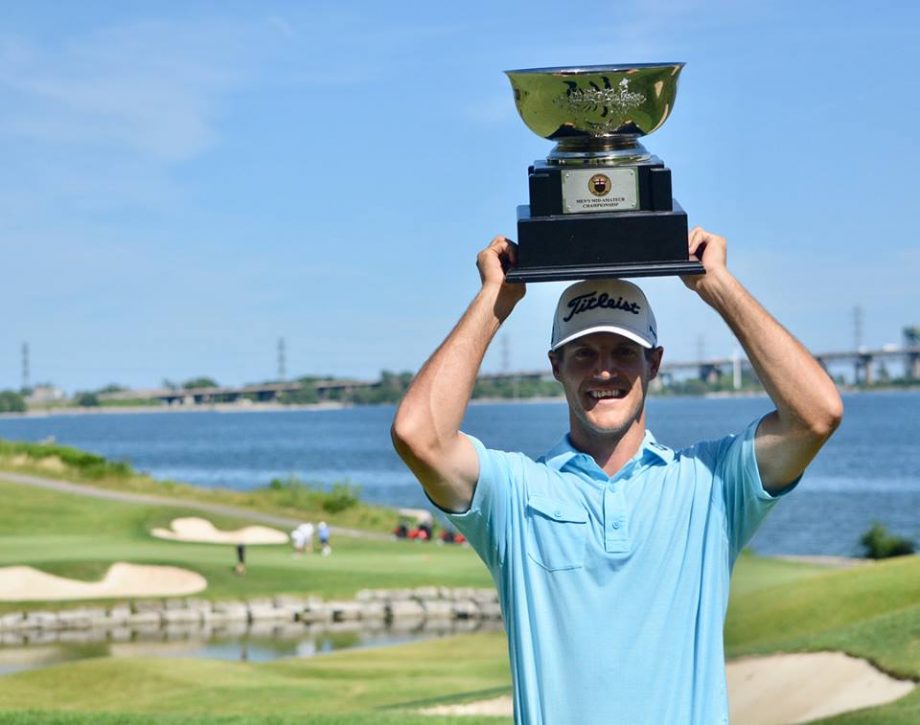 It’s not every day that a Canadian NHL Referee Qualifies for the U.S. Open and plays with the pros. What’s even more spectacular, is after the extraordinary experience of playing last week at Shinnecock Hills Golf Club in the U.S. Open, NHL Hockey Referee Garrett Rank from Elmira Golf Club came home to Ontario to win a provincial championship.

Bunker took home the Mid-Masters Championship (40-years and older division), he placed T2, 69-67-72 in the Championship.

Garrett Rank, an NHL referee, was a member of Golf Canada’s National Men’s Team from 2012-2014, and 2018 U.S. Open qualifier.  He also golfed with Team Canada in the Pan American Games in 2015, as well as winning the Investors Group Men’s Mid-Amateur Championship in 2015. He had a hat-trick at the Canadian Mid-Amateur championship, winning it three times in a row and finished runner-up in the 2012 U.S. Mid-Am. Winning the Canadian Mid-Am got him a ticket to three RBC Canadian Opens, making the cut in 2016.

When asked about the playing conditions today on the course, Garrett Rank remarked that the wind was the reason that no course records were had during the final round of the Championship “It was dead calm the last two days so it played a lot easier, and then with the wind today it was tricky …Had a couple shots spin up into the wind, and come up short, and then misjudged the wind a few times … so the wind out here coming off the lake changes the golf course for sure.

Garrett Rank who went 64-64-70 was in first place after every round this week and went into day 3 feeling confident.  His brother, Kyle Rank who recently caddied for him after he qualified for the U.S. Open finished T5 with 67-67-71.  During the first round, Garrett Rank tied what was at that time the Burlington Golf and Country Club course record – 64.

After finishing in 1st place after all 3 rounds played at the Burlington Golf and Country Club, Garrett Rank finished with a total of 198 over 3 days, finishing 12 under par 64-64-70.  After the first round of the Investors Group Men’s Mid-Am Championship, Garrett Rank was informed by Burlington Golf and Country Club staff that he had tied the course record with a (-6) 64, which made topping the leaderboard an even better accomplishment.

“Anytime you can come and play in a provincial championship, and at the end of the day have a good day, being the clubhouse leader is something special. You play golf all year long to put yourself in these positions. Coming off a little bit of a disappointment but a great opportunity and a great week at the US Open, it was great to come here and shoot a great score!” – Garrett Rank

The next day, Garrett finished (-6) 64 once again, but this time, the course record was beaten by Stephen Brown of Sarnia Golf and Curling Club with (-7) 63.

Knowing that the course record had been set the day before at (-6) 64, Brown knew he was in a good position to make a course record when he was finishing up his round “It kinda happened late in the round, I was two-under on the back nine, had a couple birdies, birdied 3 and 6, and was four-under with 4 holes left, and I was like, okay maybe birdie one or two more and I’ll be in a good spot for tomorrow. I had an eagle and one birdie and all of a sudden I was seven-under and I had one hole left, and … I didn’t have time to think about it … I guess that’s how you get to 63” – Stephen Brown

The Investors Group Ontario Men’s Mid-Amateur championship is a 54-hole competition featuring Ontario’s best golfers age 25 and older that have gained entry into the event through one of nine qualifying tournaments or an exemption. Competitors age 40 and over also compete for the Ontario Men’s Mid-Master division trophy. Contested annually since 1993, past champions of the event include Ontario Golf Hall of Fame members Stu Hamilton and Kelly Roberts, Dave Bunker, Graham Hill and Drew Symons.