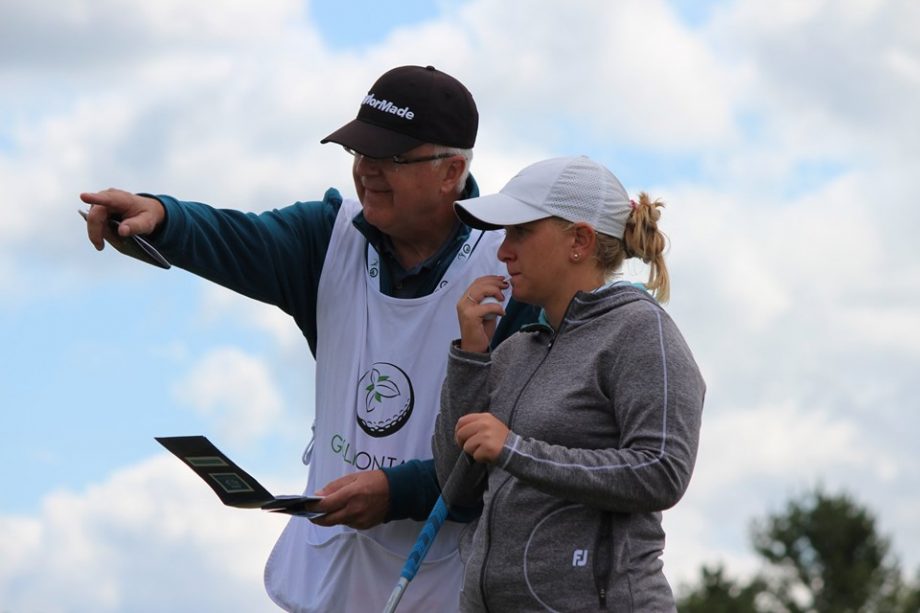 Tottenham, ON — The first round of the inaugural Ontario Disability Championship got underway today at Woodington Lake GC. 29 players took to the beautiful course in hopes of being the first champion in tournament history.

With crowds circulating the first tee deck, the field teed off at 9:30 am showcasing their ability early on, and the impressive play didn’t stop there. With some hot scores throughout, the day proved to not only be a celebration of new beginnings, but also a look to the future of how competitive such a championship can really be.

In the men’s portion of the event, it was Tracy Ramin from Montrose, MI who came out on top after 18. Ramin got his round underway wit a thunderous drive off the tee and continued that momentum throughout. With only four bogeys, Ramin played a secure game all the while still finding openings for birdies when possible.

“I was pretty accurate today,” said Ramin. “The struggle I had today was making putts but I was still able to snag some birdies when possible. I came out to have fun, but it’s always nice to perform at the same time.” When asked about the tournament and the competitive field, he couldn’t help but name drop one of the two players within two strokes of him.

“I may be in the lead right now, but I know Josh Williams (Baden, ON) is hot on my tail. Today’s my day but it will be tough to hold the lead.” Both Kurtis Barkley (Winchester, ON) and Williams only sit within two strokes of the leader after 18.

Barkley, who trails in second by only one stroke with a score of +2 on the day, also had quite the impressive showing today. Battling back from three straight bogeys to start the round, Barkley picked up the slack on the back nine carding three birdies to pull him to within reaching distance of the top spot.

As for Williams, the Craigowan G&CC member continues to impress. After a fantastic practice round that shocked the competitors the day before, he proved that he is a serious threat to win it all with another solid round today. Scoring +3 on the day, he also is within reach of claiming the throne tomorrow afternoon.

While the men find themselves in quite the tight race, the women also showcased an impressive outing today. Natasha Stasiuk (Oakville, ON) ended her round with a score of +10 to take the lead, while Elina Pylkkanen (Espoo, Finland),and Tessa Troan (St. Catherines, ON) sit in second and third. Stasiuk opened her round joking how she hates to wait, and proved it with her quick, yet steady, play throughout the day. The three girls will continue their round tomorrow to see who can take home the hardware.

Tee times tomorrow begin at 9:30. For future results and information on the tournament, visit the official tournament page HERE

Golf Ontario is Ontario’s Provincial Sport Organization focused on enhancing participation, elevating performance and supporting the passion of golfers in Ontario. With over 100,000 individual members and 450 member clubs, Golf Ontario is one of the largest golf associations in the world.  From rating courses and keeping the rules of the game intact, to growing the game at the grassroots level and hosting the best amateur tournaments in Canada, Golf Ontario is a passionate group dedicated to shaping lives through Golf.

About the Ontario Disability Championship

This event will showcase some of Ontario’s top athletes with disabilities in a provincial championship environment. Focusing on player development, this inclusive event will ensure a proper pathway and better competition opportunity for some of the highest performing athletes with disabilities. This event will be included in the list of events eligible for world ranking points and will see both men and women compete in both low gross and low net categories.

Woodington Lake Golf Club is home to 36 holes of picturesque golf in Tottenham, Ontario, just north of Toronto. The original course, The Legend Course, opened in 1995 and is built on over 200 acres of rolling terrain. Carved from towering pine forest and nestle around Woodington Lake, this course Is truly legendary. The newest addition to Woodington Lake Golf Club is the Legacy course, a true mix of Links and Stadium styles. With very challenging water hazards, along with fast and undulating greens, the Legacy course will keep golfers of every skill coming back for more.