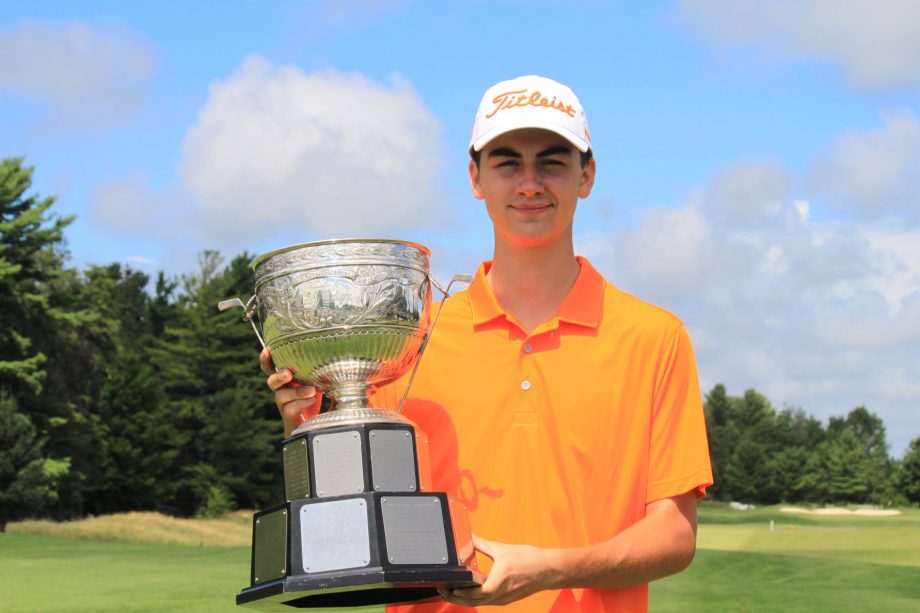 Southampton, ON – The pristine, but challenging Saugeen Golf Club was the perfect stage to host the first Golf Ontario championship of the 2020 season. With an impressive finish in his fourth and final round, Nolan Piazza (Cherry Hill Club) took home the Ontario Junior (U19) Boys’ Championship title for the second time in 3 years. Winning the Ontario Juvenile (U17) Boys’ Championship title was Andreas Diogenous (Whistle Bear GC).

Finishing on a high note, Piazza saved the best for last with his most outstanding round of the championship. Ending with a sizzling score of six-under (66) for the round, Piazza birdied seven holes, offset by only 1 bogey on the day.  Piazza finished the championship at 14-under (274), 10 shots clear of the next competitor. Diogenous, en route to his Juvenile championship, also played his best round yet, carding a final round four-under to tie for second in the Junior (U19) Boys’ division. Sharing second place was Kiefer Bulau (King Valley GC), who climbed four spots on the day with a final round 68, including six birdies.

“It feels really good to win the Junior Boys’ Championship for a second time”, said Piazza when asked how this win feels. Remarkably, the last time the title was won twice by the same player was in 2004 and 2006 by Brad Revell (Cataraqui G&CC). Piazza has one more year to compete in the Junior (U19) Boys’ division, as he commented he’d “like to try for a third win again next year. I didn’t really change anything today with my play. My short and long game were both clicking today, but my putts were falling into place better which was good to see”. When asked if playing in a grouping with round two leaders, Ty Stansfield (Thornhill Club) and Yuqi Liu (The Country Club – West), helped improve his competitive play, Piazza said “it was fun to be with them, as we were all low key about it today. No one was too serious about it and we were just out there having fun”. Piazza has been putting in the work, having played around sixty-five rounds already this year.

“It feels great to have three championship titles to my name now”, said Diogenous as he reflected on his Ontario Peewee Boys’ (2017) and Bantam Boys’ (2019) Championship titles. “It’s really exciting and now I have one more to go with a couple shots at the U19 title hopefully”. With his best round of the championship today, Diogenous said “coming down the stretch my putter was getting a little hot. I birdied 16 and 17 which put me in a good spot coming in. I was hitting iron shots more at the pins instead of playing for the middle of the greens, I was more aggressive, and made some good putts”.

Golf Ontario would like to thank the players, staff, and volunteers for their support of our first championship of the season. To Saugeen Golf Club, General Manager Brad Young, and all their hard-working staff, thank you for being gracious hosts on such a well conditioned course, and for providing us with such valuable volunteers. Lastly, a huge thank you to our sponsors and partners, Adidas, Taylor Made, Modern Golf, Dormie Workshop, Durham Artificial Grass, Humber College, Barcelo Bavaro Grand Resort, Baka Mobile, and Play Golf Myrtle Beach. We are grateful for your continued support.

For full results and information on the championship, visit the official championship page here.