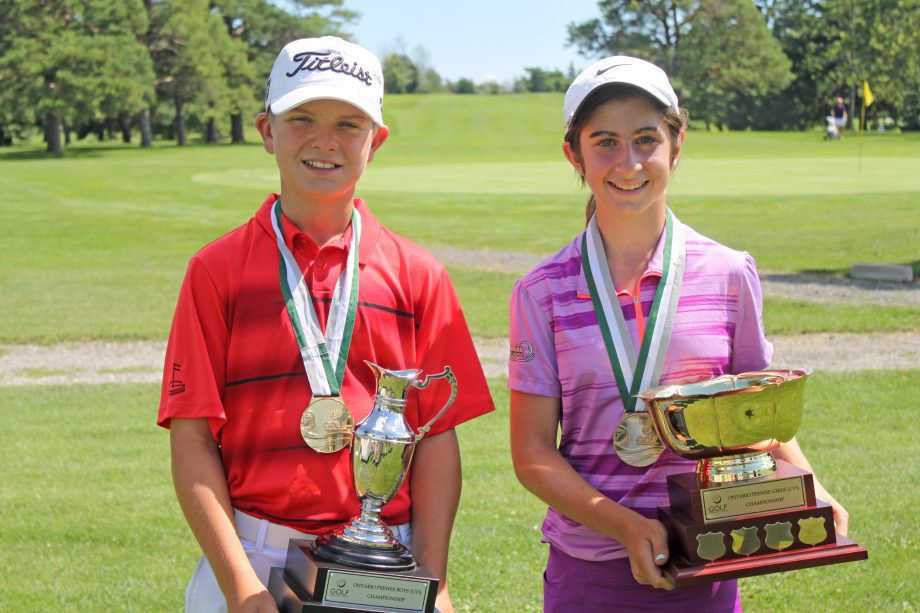 The championship, open to male and female players under the age of 13, began with 58 of the province’s top young players. At the end of competition, Burlington’s Peter Blazevic and Maple’s Alyssa DiMarcantonio were the first to hoist the trophies.

Things were close coming into the final round on the boys’ side with Toronto’s Nicholas Lin entering the day with the lead at one-under. However, with so many players within striking distance, it was anyone’s title to win. Lin finished the day seven-over and slipped into a tie for fifth. The best round of the day went to Blazevic, 11-years-old and a member at the Trafalgar Golf & Country Club, who finished even. That second round score, along with his opening round four-over (74), earned him the win at four-over for the tournament (74-70-144).

Things were a little less dramatic on the girls’ side as DiMarcantonio, 12, from Station Creek Golf Club, entered the day with a nine-shot lead after an opening round of one-over (71). She would improve on that impressive performance during the second round with an even par (70) to win the title by 16 shots (71-70-141).

Finishing second was Pickering’s Ava Koukofikas. Koukofikas finished the opening round 13-over (83), but rebounded nicely in the second round with a four-over (74) to earn the silver (83-74-157).

The GAO would like to thank Puslinch Lake Golf Course, their staff and volunteers for hosting the event. Thanks also to the GAO volunteers for their continued support of golf in the province.

For complete tournament information, including final leaderboards, see the tournament site at: http://gao.bluegolf.com/bluegolf/gao15/event/gao1589/index.htm.

The Ontario Peewee Championship is making its debut in 2015. The championship is hosted by the Puslinch Lake Golf Course, which has a history with the GAO, hosting the Ontario Bantam Championship from 1999 to 2012.  The tournament is open to males and females who are younger than 13 years of age as of Aug. 1.