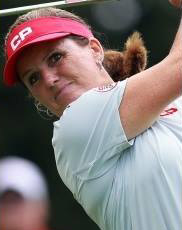 When the 2015 Toronto Pan American Games, and specifically the golf competition, begin on July 16, four golfers will don the maple leaf to represent Canada. The veteran of the squad will be 50-year-old, Charlottetown, P.E.I. native Lorie Kane.

Kane, fourth ranked professional in Canada, has been a fixture on the Canadian golf scene since the early 1990s. In 1996 she made her LPGA debut and has gone on to win four tournaments on the tour including: the 2000 Michelob Light Classic, 2000 New Albany Golf Classic, 2000 Mizuno Classic and 2001 LPGA Takefuji Classic.

Kane also has two wins in the Hyundai Team Matches and two wins on the Legends Tour. As an amateur, Kane captured the 1992 Espirito Santo Trophy,.

This will not be the first time that Kane has represented Canada. She represented her country at the World Cup in 2005, 2006 and 2008 and was also part of the World Team for the 2010-13 Handa Cups.

Perhaps one of the greatest honours Kane has received is the Order of Canada, which she was awarded in 2006. On the LPGA Tour, she has also received the 1998 Heather Farr Player Award, which represents hard work, dedication and love of the game. In 2000 she received the William and Mousie Powell Award, an honour given to the player whose behavior and deeds best exemplifies the spirit, ideals and values of the LPGA.

Team Canada will undoubtedly lean on Kane’s leadership and experience as they search for Pan Am gold.

Don’t miss your chance to see the legendary Kane and the rest of Team Canada at the Pan Am Games. For more information visit: http://www.toronto2015.org/golf