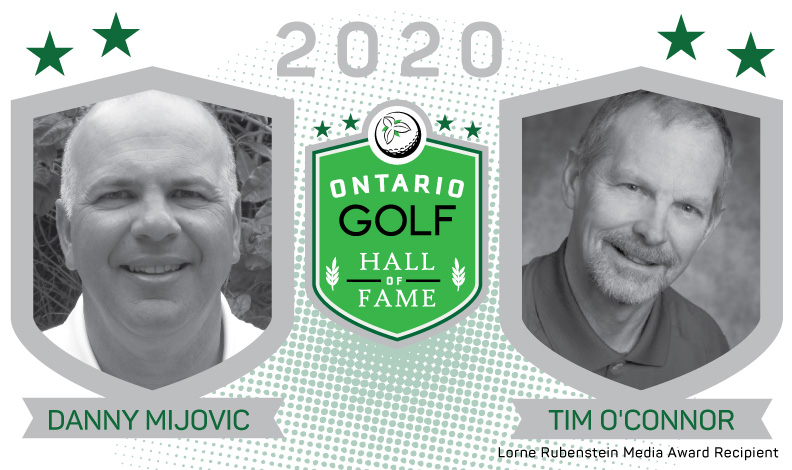 UXBRIDGE — With great excitement, Golf Ontario is proud to announce the 2020 Ontario Golf Hall of Fame’s newest acclaimed member, Danny Mijovic. Mijovic will be honoured at the official induction ceremony on May 6, 2020 at Wooden Sticks Golf Club in Uxbridge. Tim O’Connor will be receiving the Lorne Rubenstein Media Award, presented annually to accredited members of the Ontario media for “major contributions to golf.”

Maple resident Danny Mijovic, 59, enters the prestigious Ontario Golf Hall of Fame in the Professional Golfer category after 35 plus years as a golf professional.

Growing up, he played much of his golf at York Downs Golf and Country Club.  It was here Mijovic would grow his passion for the game and develop his skill level to reach the professional stage.

The list of accolades began in his collegiate years, where he attended Texas Wesleyan University on a golf scholarship. He was an individual medalist at nine collegiate tournaments, and is the only player at any collegiate level to win an individual national championship in all four years.

During his time at Texas Wesleyan, the Rams scored four consecutive national runner-up finishes and won twenty-four collegiate tournaments. He also won the 1983 Mid-Atlantic Amateur and the 1983 Canadian Amateur tournaments. In that same year Mijovic, was the Number 1 ranked amateur in Canada. In 1984 he would be Canadian Amateur Championship Runner up and again be ranked the #1 Amateur in Canada and also #5 in the US.

After graduating with a degree in business administration he represented Canada on the World Amateur Team (Eisenhower Trophy) in 1984 before turning professional.

The four-time All-American went on to win the 1983 Canadian Amateur Championship and his very first professional tournament, the Mexican Open, in 1984. Other notable wins include the 1984 Porter Cup, becoming only the second Canadian to do so, (the other being Gary Cowan) and also in his first professional Canadian tournament, would win the 1985 Labatt’s Blue-Light Championship on the Canadian Tour beating out Canadian greats like Dave Barr, Jerry Anderson and Jim Rutledge.

Mijovic has played in two U.S. Opens and made the cut in each of his three appearances at the British Open. Closer to home he was the 1987 Ontario PGA Champion and more recently, Mijovic won the 2012 Senior PGA of Ontario Championship.

A testament to his incredible skill was his ability to have shot 61 an astounding four times in tournaments including setting a course record with that number while winning the 2005 Osprey Valley Classic Championship on the Great Lakes Tour. With numbers like that it is obvious why in 2011 he was inducted into the National Association of Intercollegiate Athletics Hall of Fame and the Texas Wesleyan University Hall of Fame.

With his combination of knowledge and passion for teaching and coaching, Mijovic continues giving back to the game that has been so good to him. He is currently ClubLink’s Director of Instruction at King’s Riding Golf Club and King Valley Golf Club where he provides a memorable, informative, and entertaining experience.

This year’s recipient of the Lorne Rubenstein Media Award is Tim O’Connor, a very worthy and distinguished recipient given his incredibly vast contributions to the game in Ontario.

A London, ON native, O’Connor was a junior member of Sunningdale Golf and Country Club. He was an avid junior golfer, but found himself a far better caddy even though he dutifully took lessons and practised as much as he could.

At Western University, he wrote album and concert reviews for the Gazette, the student newspaper, and became Entertainment Editor in his fourth year and then eventually elected as Editor-in-chief.

Various positions afterwards including a stint with United Press Canada and then with CP where he became its National Music Writer, reporting and commenting on popular music where he interviewed music icons such as David Bowie, Robert Plant, Lou Reed and many more.

While at CP, O’Connor re-connected with the game of golf. When former CP staffer John Gordon became editor-in-chief of SCOREGolf Magazine, O’Connor was invited to write for the magazine. He would then go on to twice win the writing contest of the Golf Course Superintendents Association of America based on stories published in SCOREGolf.

Bolstered by his awards, opportunities to write freelance, and encouraged by none other than Lorne Rubenstein, he quit Canadian Press in 1992 to write about golf full-time as a freelance. He would go onto to write for a wide variety of golf publications across North America, The Financial Post, Golf Digest, GOLF, Golf World, LINKS, Golfweek, Golf Canada and Ontario Golf Magazine.

He’s also been a freelance golf reporter for CBC Radio, and covered the Masters, U.S. Open, PGA Championship, duMaurier Classic and the Canadian Open. Additionally, he produced golf documentaries for the CBC Radio program The Inside Track, launched The Golf Show, for Telemedia Radio Network and the Golf Show on AM-Talk640.

With two young boys having come along quickly, he switched gears and became Director of Communications for ClubLink Corporation. In early 2000, his engagement changed to a consultant, and he formed O’Connor Golf Communications.

O’Connor kept writing while working as a consultant including books: The Feeling of Greatness: The Moe Norman Story, The Ladies’ 1924-1999: A History of the Ladies’ Golf Club of Toronto, Devil’s Pulpit: The First Decade, and The Single Plane Golf Swing: Play Better Golf the Moe Norman Way. In 2007, he edited The Final Missing Piece of Ben Hogan’s Secret Puzzle, an instruction book based on Hogan’s swing.

O’Connor also transitioned to coaching golfers on the mental side of the game, becoming the Mental Performance Coach of the ClubLink Academy at Glen Abbey. He continues to deliver keynote speeches and conduct his Walk Your Talk workshops on leadership for the golf and business organizations, and his Getting Unstuck golf mental performance workshops.

In 2015, he returned to his media roots, launching the Swing Thoughts podcast with co-host Howard Glassman (aka Humble Howard).  He’s also just completed his third year as Head Coach of the University of Guelph men’s and women’s varsity golf teams.

He now resides in Guelph with his wife Sandy Halloran, and two sons, Corey and Sean.