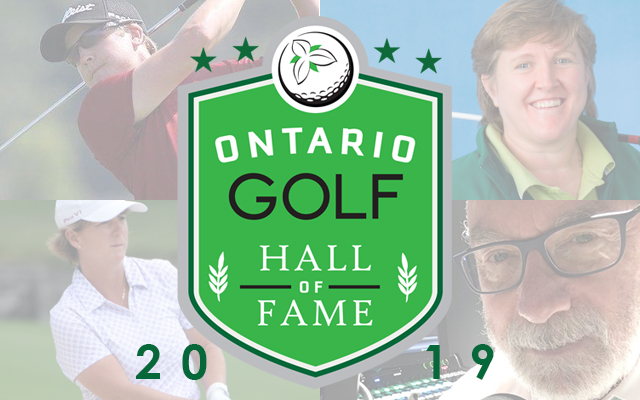 Golf Ontario is proud to announce this year’s Class of the Ontario Golf Hall of Fame. Deborah Lee Eldridge, Judith Kyrinis, and Richard Scott, will become the newest members of the Hall at the official induction ceremony on May 1, 2019 at Wooden Sticks Golf Club in Uxbridge. In addition, Scott Metcalfe will be receiving the Lorne Rubenstein Media Award, presented annually to accredited members of the Ontario media for “major contributions to golf.”

Dundas resident Deborah Lee Eldridge, 51, enters the Ontario Golf Hall of Fame in the Amateur Golfer category.  At an early age, she quickly became an outstanding player learning the game from her father; both were members of the Hamilton Golf and Country Club.  It was evident early in her life that Eldridge found a true passion for the game.  She always was a hard worker, learning her craft and developing her skill level to reach the global stage.

In addition to Deborah’s outstanding Ontario and Canadian golf accomplishments, she represented Canada in no less than four international events.  In 1989, Eldridge ranked as the number one golfer in both Ontario and Canada.  In the same year, she won the Score Award for the top Female Amateur in Canada.  In 1989 and 1990, she was selected to the Canadian International Team to compete in both France and Great Britain.  Eldridge excelled by winning the 1989 Ladies’ Open Amateur Championship in France.

Deborah had a marvelous college career at Indiana University, winning four tournaments and being selected as Honorable Mention All-American for two years.  While competing at the NCAA Division 1 level she was named the Big 10 Player of the Year, and was selected for the All-Big 10 Team in 1989 and 1990.

After graduating from university Deborah turned professional where she continued to compete, coach and grow the game of golf.  As a professional, she had a wonderful career where she won 11 professional titles throughout Canada and the USA.  She earned her LPGA Tour status in 1996 and competed as a full-time member.

Eldridge has had an extensive career as a golf coach and mentor as well, coaching Mohawk College Men’s and Women’s teams from 2011-2018 and helping them win multiple OCAA medals. She has also taught at several courses and golf centers over the years as a PGA of Canada Class A Teaching Professional.

Deborah has carried herself with grace and integrity while being a keen competitor and great ambassador for both Ontario and Canada during her golfing career.

Also entering the Hall in the Amateur Golfer category is Judith Kyrinis, 54 of Thornhill. Kyrinis, a member of both The Thornhill Club since 1996 and Granite Golf presently, truly exemplifies the description of champion and hall of famer.

Judith has established a prominent record as an amateur golfer in Ontario, Canada and the United States, participating and winning local, provincial, national and international amateur Championships.

Being a busy and involved mother of three while balancing a demanding nursing career consisting of the Intensive Care Unit and Pre-Admission Clinic at Toronto General Hospital, it is no wonder that much of her outstanding success in golf came later on in her golf career.

In the provincial spotlight, Kyrinis has amassed an unbelievable amount of accomplishments. She was the 1998 Ontario Women’s Match Play Champion, the 2009 Women’s Four Ball Champion (with Susan Wickware), the Ontario Senior Women’s Champion for 2016, 2017 and 2018, and the Ontario Ladies Mid-Amateur Champion for 2017.

Other accomplishments include being the #1 ranked golfer for Ontario Senior Women in 2014 and 2016, #1 ranked for Ontario Mid-Am Women in 2016, and voted the Top Female Golfer of the Year by the Golf Journalists Association of Canada for 2017.

Georgia resident Richard Scott, 35, a lifetime Honorary Member of Kingsville Golf Club, also enters the Ontario Golf Hall of Fame in the Amateur Golfer category. In a short period, Richard proved to be an outstanding champion. He won at every level – from junior to college and then provincial to national and finally professionally.

Besides his play, Scott was also very well known throughout the sport for his character. He was always admired for how he conducted himself on and off the course and how he treated fellow competitors and officials.  Scott represented himself, his teams, the sport, Ontario and Canada with dignity and respect.

Internationally, he had even more success individually and on various teams. Highlights include being a member of the Canadian Junior Team at the 2001 World Golf Championship in Japan, and the following year he became the only Canadian ever to reach the finals at the USGA’s Junior Championship, placing second. In 2006, he finished second in both the individual and team categories at the World Amateur Championship in South Africa.

During his college years, Scott was a member of the Georgia Bulldogs who twice won the SEC Team Championship, and the 2005 NCAA Division 1 National Championship which included being runner up in the SEC Championship.

He would then go on in 2007 to win 2 events on the TarHeel Tour and also play on the Canadian Tour. Scott then played his way onto the Web.com Tour and finished in the top 50 to qualify for the Tour Championship.

Scott currently plays out of Sea Island Golf Club in St. Simons Island, GA, where he works as the Director of National Sales.

This year’s recipient of the Lorne Rubenstein Media Award is Scott Metcalfe. Scott is a worthy and distinguished recipient given his significant contributions to the game in Ontario.

When the golf broadcast season begins in early April on Sportsnet 590 The Fan, with co-host Ian Leggatt, it will be Scott’s 20th year of overseeing and hosting the hour-long Toronto-based golf talk show (previously known as Fairways) which airs Saturday mornings at 7:00 AM and runs through to early October.

Scott also co-hosts two-minute weekday vignettes with Leggatt, also from April to early October. Some of you will remember Ontario HOF member Bob Weeks as Scott’s long-time co-host, before Bob moved to TSN in 2014.

Metcalfe has had a distinguished broadcasting career. It began at CHAB Radio in Moose Jaw, Saskatchewan 43 years ago followed by a stint at CHED in Edmonton, Alberta. He moved to Toronto’s CJCL starting as a Queen’s Park reporter before taking on the responsibility of news anchor and News Director. In 1992, CJCL became The FAN 590, Canada’s first all-sports radio station and Scott was appointed Sports Director and Executive Producer.

A short time into his tenure, he added the golf show to his weekly repertoire and it became a Saturday morning staple of the station. The FAN joined Rogers Broadcasting and Scott was appointed News Director of 680 NEWS in 2003 a position he held until early 2018 when he was appointed as National Format Director, News, Rogers Radio. Although he has responsibilities for Rogers all news radio stations from coast-to-coast, Metcalfe continues to rise with a 4:30 AM Saturday wake up call to be in studio for the Golf Show on Sportsnet 590 The Fan.

Metcalfe was awarded a Lifetime Achievement Award in 2017 by Canada’s Radio Television Digital News Association (RTDNA) and is a member of Clublink with his home course being Blue Springs. A proud member of the Golf Journalists Association of Canada, Scott has covered Canadian Opens and other provincial and national golf events since coming to Toronto and remains as committed as ever to the coverage and promotion of golf.